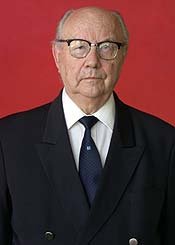 A native of Latvia, Adolf Sprudzs was educated in Latvia and Germany, where he studied law, and in Belgium, where he obtained licentiate degrees from the University of Louvain in business administration and in international relations. He received his M.A.L.S. degree from Rosary College in Illinois in 1961. Since 1955, Mr. Sprudzs has served with the law libraries at Northwestern University and the University of Illinois and as supervisor of the Defense Information Office in Chicago. He joined the University of Chicago Law School in 1965 and was foreign law librarian and lecturer in legal bibliography from 1967 to 1992.

Among his numerous publications are Res Baltica, Treaty Sources in Legal and Political Research, and The Baltic Path to Independence (ed.).