Posted on Aug 28, 2017, by The University of Chicago Library

Samuel N. Harper, the first American scholar to have devoted a career to the study of Russia, was a first-hand witness to Russia’s revolutions of 1905 and 1917. An avid collector, over four decades, Harper built a unique archive that provides a street-level view of many of the historic events of the period. Broadsides, handbills and pamphlets attest to a long war of ideas—and to a decisive battle for explanatory power in the months leading up to the Revolution.

Presented on the centenary of the 1917 Russian Revolution, the exhibition also draws from other archives in Special Collections, including materials documenting the development of revolutionary print culture in the USSR, the spread of revolutionary ideas and methods from Russia to the Far East and to the streets of Chicago, and anti-revolutionary texts such as the fraudulent, anti-Semitic Protocols of the Elders of Zion. Together they allow us to trace visual genealogies from the political satire of the post-1905 period to the mortal derision of Stalinist propaganda in the 1930s and the HUAC hearings of the 1950s.

Free and open to the public.

Presented on the centenary of the 1917 Russian Revolution, this exhibition immerses visitors in the distinct textures and speeds of everyday life that arose—and have lingered stubbornly—in the wake of revolutionary upheaval. Revolution Every Day juxtaposes works of Soviet graphic art—primarily posters from the 1920s and 1930s, many by female artists such as Valentina Kulagina—with works on video and film, including excerpts from Dziga Vertov’s documentary films from the 1930s, post-Soviet videos by artists like Olga Chernysheva, as well as a new commission by Cauleen Smith.

Trace the worldwide spread of revolutionary and anti-revolutionary media and ideas through rare printed sources. Professor and co-curator William Nickel leads a tour of the Bolshevik revolution of 1917 as it was waged through broadsides, pamphlets, periodicals, and posters.

Registration: This tour is full. If you would like to be added to the waitlist, please email humanities@uchicago.edu.

Presenters at this two-day workshop, the first in a series sponsored by the Neubauer Collegium research project Revolutionology: Media and Networks of Intellectual Revolution, will focus on key texts and images emerging directly from the revolutionary struggle in Russia and the early Soviet Union.

For more information, contact Rachel Rosenberg at ra-rosenberg@uchicago.edu or 773-834-1519. 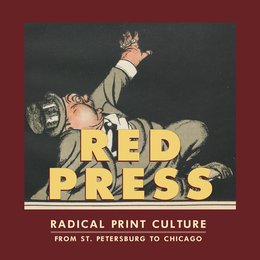