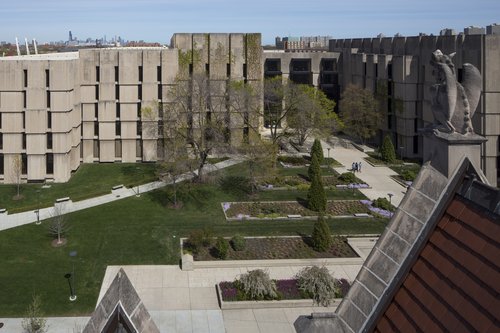 The Joseph Regenstein Library is home to over 4.5 million print volumes focusing on subjects in the humanities and social sciences, as well as business, divinity, and area studies.

History and Information about the Building

The Joseph Regenstein Library stands on the site of the original Stagg Field, the University's athletic field from 1892 to 1967. The Library is thus on the main north-south axis of the campus and looks south some 500 yards to William Rainey Harper Memorial Library, formerly the central library building. The Enrico Fermi Memorial is situated on the west edge of the 12-acre site of the Library. Henry Moore's bronze "Nuclear Energy" marks the spot where Fermi and other scientists achieved the first controlled, self-sustaining, nuclear chain reaction on December 2, 1942.

The configuration of the Library offers an interesting response to the problems posed by a complex service facility, a large building size (577,085 gross square feet of floor space), a generally consistent campus plan and style, and the relatively small scale of the other campus buildings. The massiveness of that portion of the building used primarily for books is minimized for the viewer from the west by its division into three "slipped segments." The entire perimeter of the building is broken at regular intervals by projecting bays which further reduce the impression of great size and echo the irregularities of the traditional, gothic University buildings. The exterior walls are formed by deeply grooved, sawn limestone slabs, adding texture, life and movement to the surface.

The Joseph Regenstein Library honors the memory of Joseph Regenstein (1889-1957), an industrialist, a fourth-generation Chicagoan, and a life-long resident of the city. Interested in research, and himself responsible for many innovations in the paper, plastic and chemical fields, Mr. Regenstein maintained an intense interest in the development of the city and its institutions. To honor him, the Joseph and Helen Regenstein Foundation, on November 9, 1965, gave $10,000,000 toward the new graduate research library.