About > News > The Salem Witch Trials: A legal bibliography

The law of the Salem Witch Trials is a fascinating mix of biblical passages and colonial statutes.  According to Mark Podvia (see Timeline, PDF), the General Court of the Massachusetts Bay Colony adopted the following statute in 1641:  “If any man or woman be a WITCH, that is, hath or consulteth with a familiar spirit, they shall be put to death. Exod. 22. 18. Levit. 20. 27. Deut. 18. 10. 11.”  The statute encompasses passages from the Bible written circa 700 B.C. Exodus states:  “Thou shall not suffer a witch to live.” Leviticus prescribes the punishment.  Witches and wizards “shall surely be put to death:  they shall stone them with stones:   their blood shall be upon them.”  And Deuteronomy states:  “There shall not be found among you any one that maketh his son or his daughter to pass through the fire, or that useth divination, or an observer of times, or an enchanter, or a witch.  Or a charmer, or a consulter with familiar spirits, or a wizard, or a necromancer.”

In Salem, the accusers and alleged victims came from a small group of girls aged nine to 19, including Betty Parris and Abigail Williams.  In January 1692, Betty and Abigail had strange fits. Rumors spread through the village attributing the fits to the devil and the work of his evil hands.  The accusers claimed the witchcraft came mostly from women, with the notable exception of four-year old Dorcas Good.

The colony created the Court of Oyer and Terminer especially for the witchcraft trials.  The law did not then use the principle of “innocent until proven guilty” – if you made it to trial, the law presumed guilt.  If the colony imprisoned you, you had to pay for your stay.  Courts relied on three kinds of evidence:  1) confession, 2) testimony of two eyewitnesses to acts of witchcraft, or  3) spectral evidence (when the afflicted girls were having their fits, they would interact with an unseen assailant – the apparition of the witch tormenting them).  According to Wendel Craker, no court ever convicted an accused of witchcraft on the basis of spectral evidence alone, but other forms of evidence were needed to corroborate the charge of witchcraft. Courts allowed “causal relationship” evidence, for example, to prove that the accused possessed or controlled an afflicted girl.  Prior conflicts, bad acts by the accused, possession of materials used in spells, greater than average strength, and witch’s marks also counted as evidence of witchcraft.  If the accused was female, a jury of women examined her body for “witch’s marks” which supposedly showed that a familiar had bitten or fed on the accused.  Other evidence included the “touching test” (afficted girls tortured by fits became calm after touching the accused).  Courts could not base convictions on confessions obtained through torture unless the accused reaffirmed the confession afterward, but if the accused recanted the confession, authorities usually tortured the accused further to obtain the confession again.  If you recited the Lord’s Prayer, you were not a witch.   The colony did not burn witches, it hanged them.

The Salem Witch Trials divided the community.  Neighbor testified against neighbor.  Children against parents.  Husband against wife.  Children died in prisons.  Familes were destroyed.  Churches removed from their congregations some of the persons accused of witchcraft.  After the Court of Oyer and Terminer was dissolved, the Superior Court of Judicature took over the witchcraft cases.  They disallowed spectral evidence.  Most accusations of witchcraft then resulted in acquittals.  An essay by Increase Mather, a prominent minister, may have helped stop the witch trials craze in Salem.

Researching the Salem Witch Trials is easier than it used to be.  Most of the primary source materials (statutes, transcripts of court records, contemporary accounts) are available electronically.  Useful databases include HeinOnline Legal Classics Library (see Trials for Witchcraft before the Special Court of Oyer and Terminer, Salem, Massachusetts, 1692;  The Salem Witchcraft (Clair, Henry St., 1840); and “Witch Trials,”  1 Curious Cases and Amusing Actions at Law including Some Trials of Witches in the Seventeenth Century (1916) ), HeinOnline World Trials Library, HeinOnline Law Journal Library (also JSTOR, America:  History & Life, Google Scholar, and the LexisNexis and Westlaw journal databases), Gale Encyclopedia of American Law (“Salem Witch Trials“), Google Books, Hathi Trust, and the Internet Archive.  For books and articles on the Salem Witch Trials and witchcraft and the law generally, Library of Congress subject headings include:

Adams, Gretchen A. The Specter of Salem:  Remembering the Witch Trials in Nineteenth-Century America (University of Chicago Press, BF1576.A33 2008).

Mather, Cotton. The Wonders of the Invisible World:  Being an Account of the Tryals of Several Witches Lately Executed in New England, and Of Several Remarkable Curiosities Therein Occurring (1693) .

Mather, Increase. Cases of Conscience Concerning Evil Spirits Personating Men, Witchcrafts, Infallible Proofs of Guilt in Such As Are Accused with That Crime (1693).

Rosenthal, Bernard ed. Records of the Salem Witch-Hunt (Cambridge University Press, XXKFM2478.8.W5R43 2009)(includes Richard B. Trask, “Legal Procedures Used During the Salem Witch Trials and a Brief History of the Published Versions of the Records” at pages 44-63).

Upham, Charles W. Salem Witchcraft:  with an Account of Salem Village and a History of Witchcraft and Opinions on Kindred Subjects (Wiggin & Lunt, 1867).  2v.

Mackay, Christopher S., trans. & ed.  The Hammer of Witches:  A Complete Translation of the Malleus Maleficarum (authored by Heinrich Institoris & Jacobus Sprenger in 1487 – Dominican friars, who were both Inquistors and professors of theology at the University of Cologne)(Cambridge University Press, BF1569.M33 2009).  This medieval text (Der Hexenhammer in German) prescribes judicial procedures in cases of alleged witchcraft.  In question-and-answer format.  The judge should appoint as an advocate for the accused “an upright person who is not suspected of being fussy about legal niceties” as opposed to appointing “a litigious, evil-spirited person who could easily be corrupted by money” (p. 530). 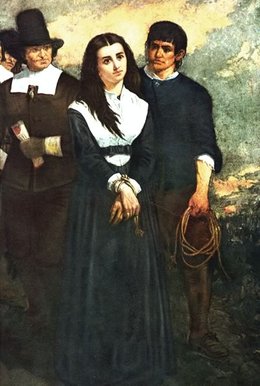