…in a single conversation with someone we can discern particular traits. But it is only through repeated encounters in varied circumstances that we can recognize these traits as characteristic and essential. For a writer, for a musician, or for a painter, this variation of circumstances that enables us to discern, by a sort of experimentation, the permanent features of a character is found in the variety of the works themselves.

Why do we all respond so similarly to the “characteristic and essential” traits of spring? Can we trace the genesis of too familiar rhetorical devices, poetic flourishes, and seasonal tropes to authentic, lived experiences of the seasons? How is the creative impulse vulnerable to the physical environment in which it germinates?

On Reading Spring explores these questions in relation to this familiar seasonal muse who harmonizes contrasts and embodies simultaneity, bringing us all into giddy confrontation with both nature’s, and indeed our own, boundless creativity. By pairing a selection of the Special Collections Research Center’s rare and unusual published works with archival letters, diaries, photographs, musical manuscripts and early drafts of poems composed between March and June, On Reading Spring considers the ways in which diverse works reveal a sympathetic vernal experience across disciplines, cultures, and time periods.

This rotating exhibition in the lobby of the Special Collections Research Center is divided into six thematic sections, each offering a discreet meditation on the unfolding of the season through experiences commonly ascribed to spring: Refreshment, Vulnerability, Epiphany, Restoration, Tenderness, and Joy.

On Reading Spring opens with works that express a sense of refreshment, exploring the period when spring’s arrival drenches land and sky through a continuous procession of storms and showers. In 1959, African American poet Margaret Danner composed a letter that illustrates the contrary nature of this productive yet confining period with an opening that could be weather report, personal disclosure, or a comment on the times, interchangeably. Virginia Woolf’s diary entry of April 30, 1926 begins by musing that in fact summer is the earth’s constant state only hidden by clouds, as if the variable habits of water in the environment were the sole arbiter of seasonal change. In Vivian Maier’s photograph of rain-soaked pavement, a blanket of domed droplets produce a sparkling simultaneity, reflecting in their tiny forms both the intensity of a recent shower and the now clear and sundrenched sky. Light and shadow produce a similar effect in a delicate, otherworldly 1901 image of Royal Fern (Osmunda Regalis) shoots in early spring from the University of Chicago Botany Department Papers. Carlos Francisco Zea casts the joyful, luminous glow of spring sunlight as a young king, del rubio Señor de Mayo, in his poem Primavera and describes the anticipation of his arrival in gentle, aqueous metaphors. 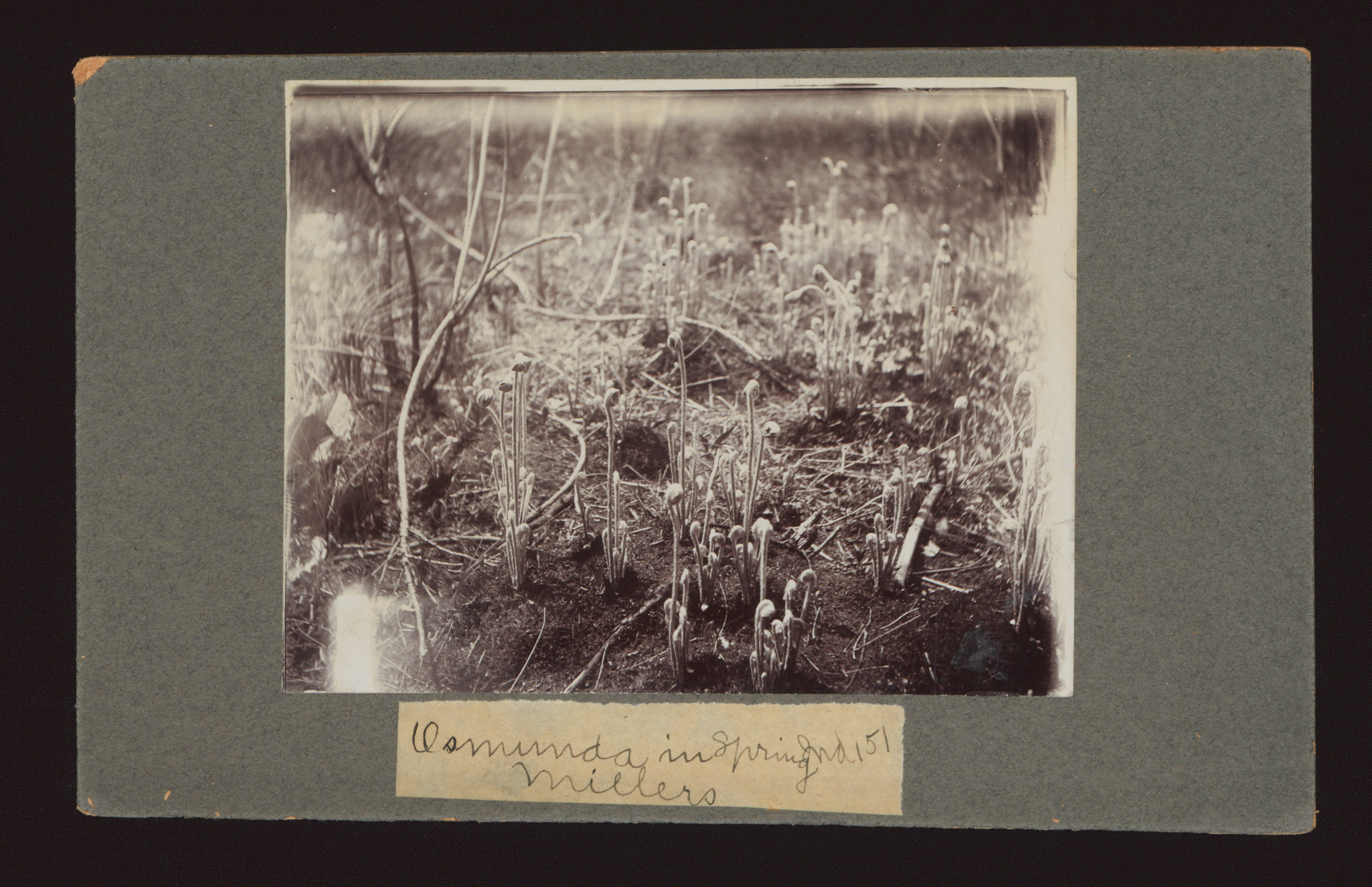 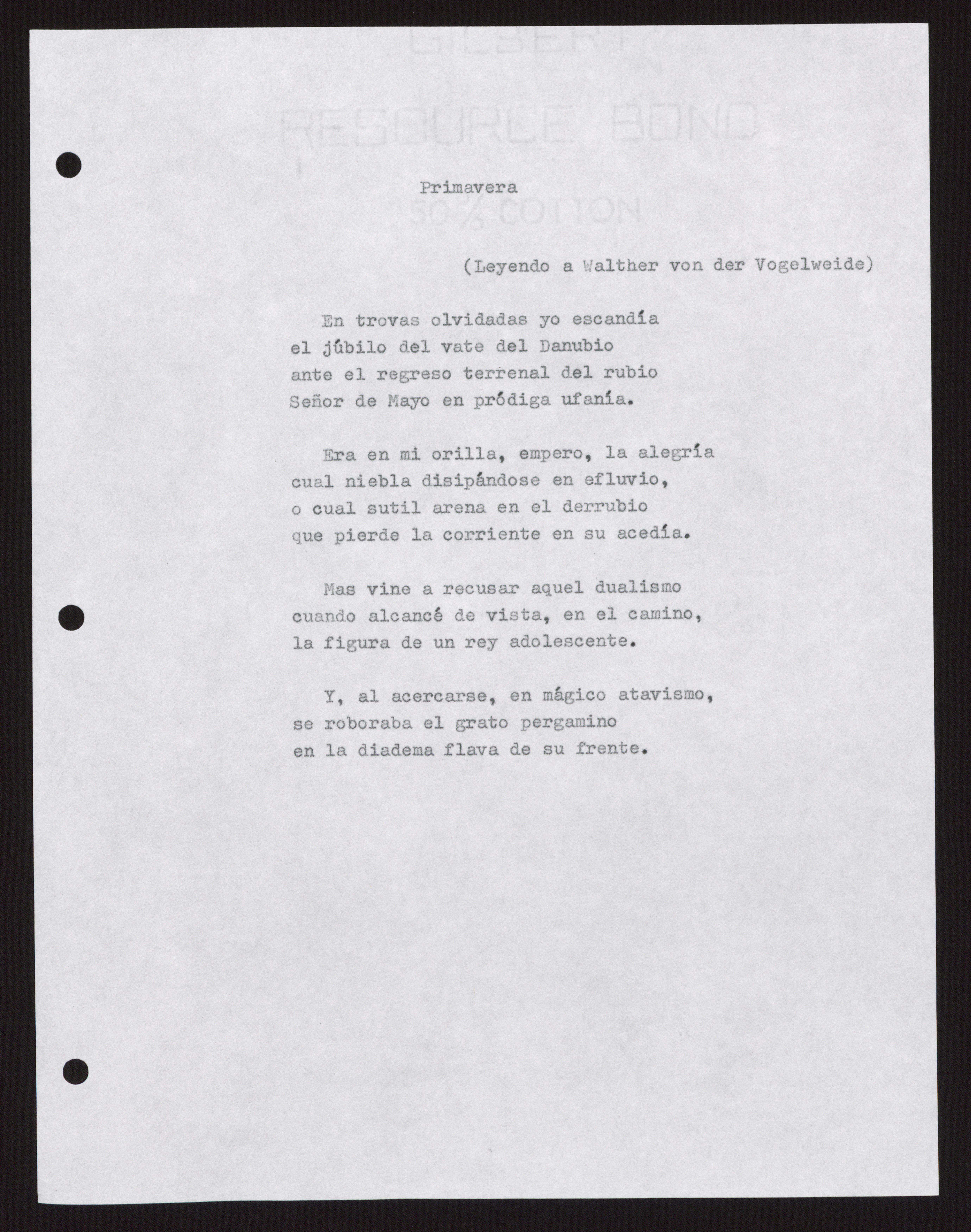 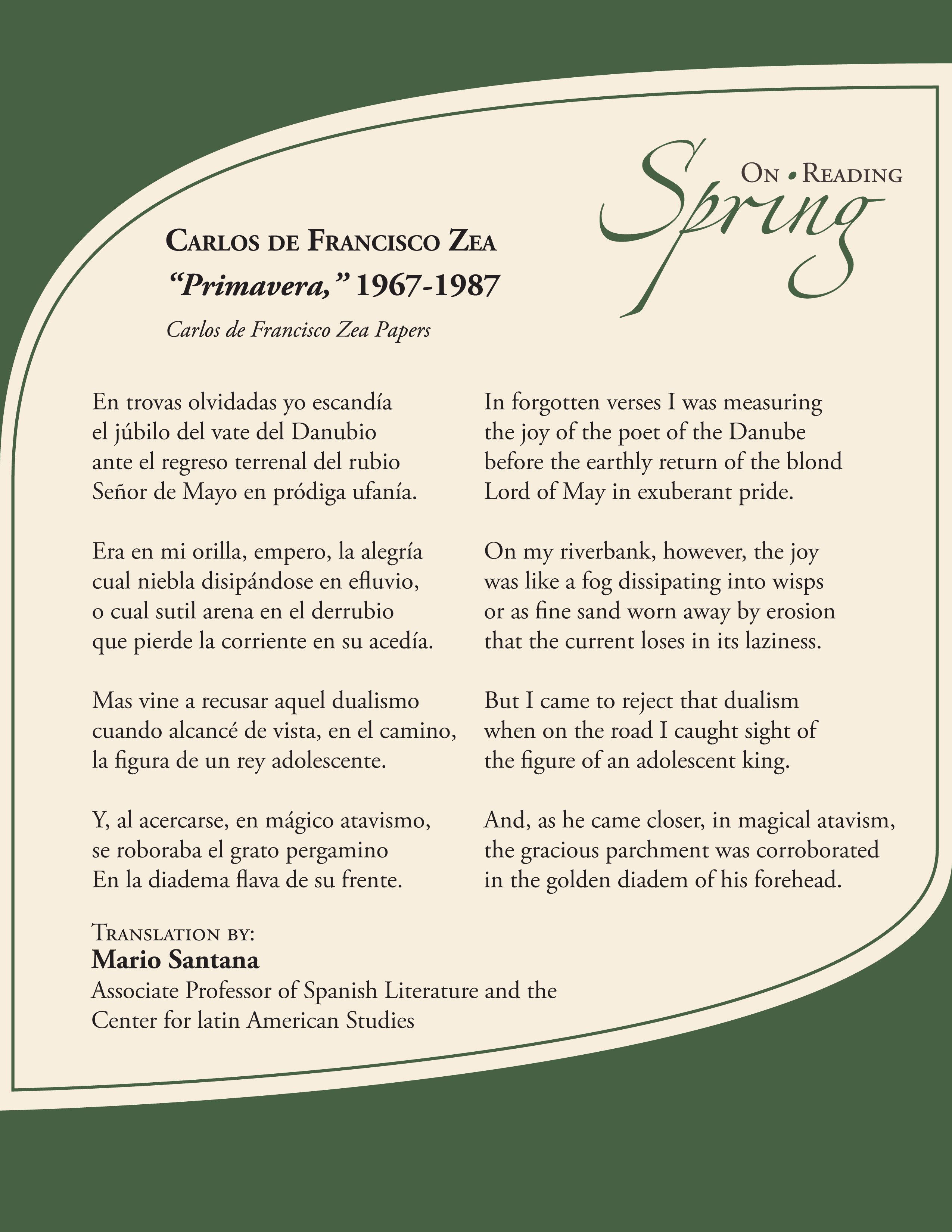 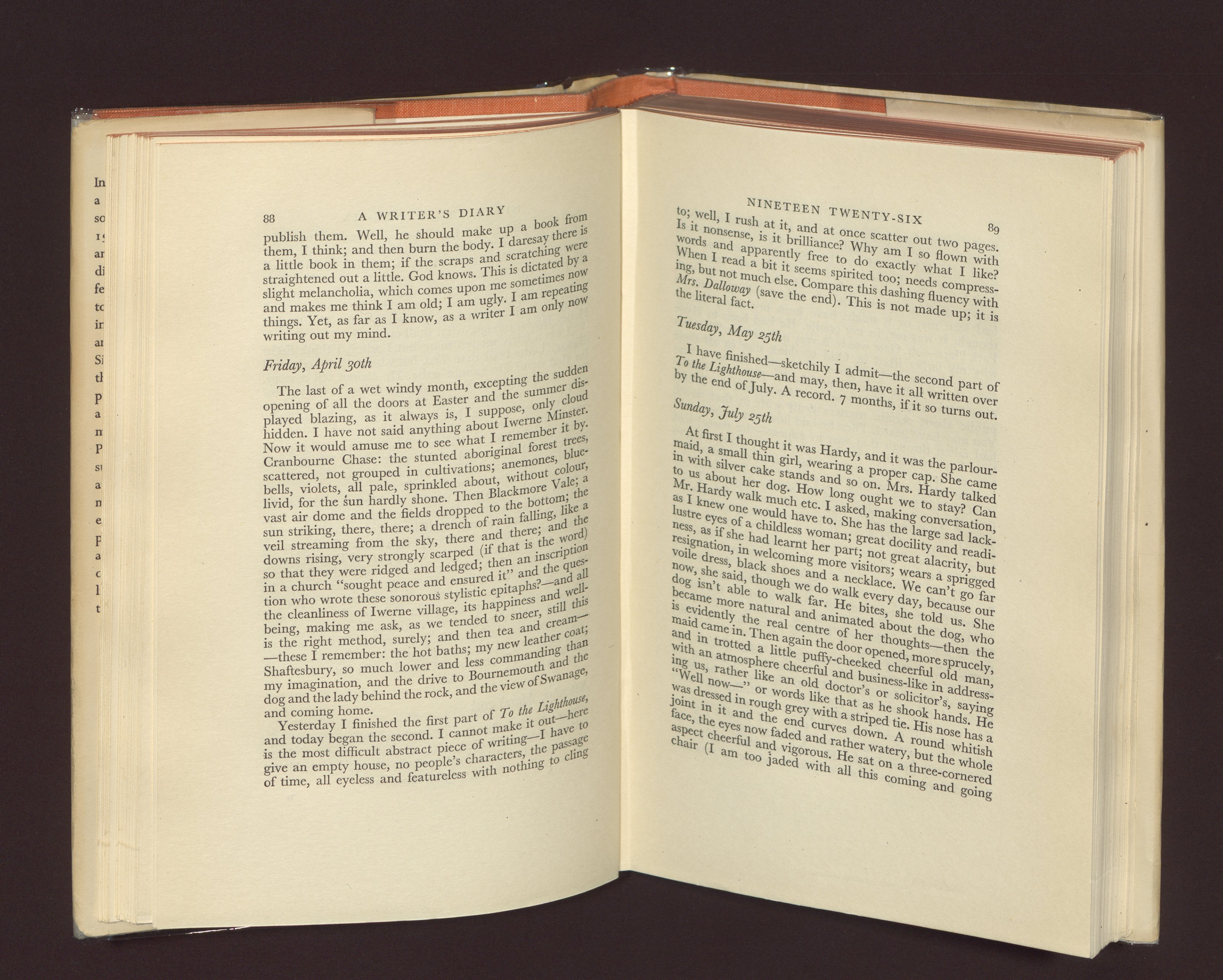 A Writer's Diary: Being Extracts From the Diary of Virginia Woolf 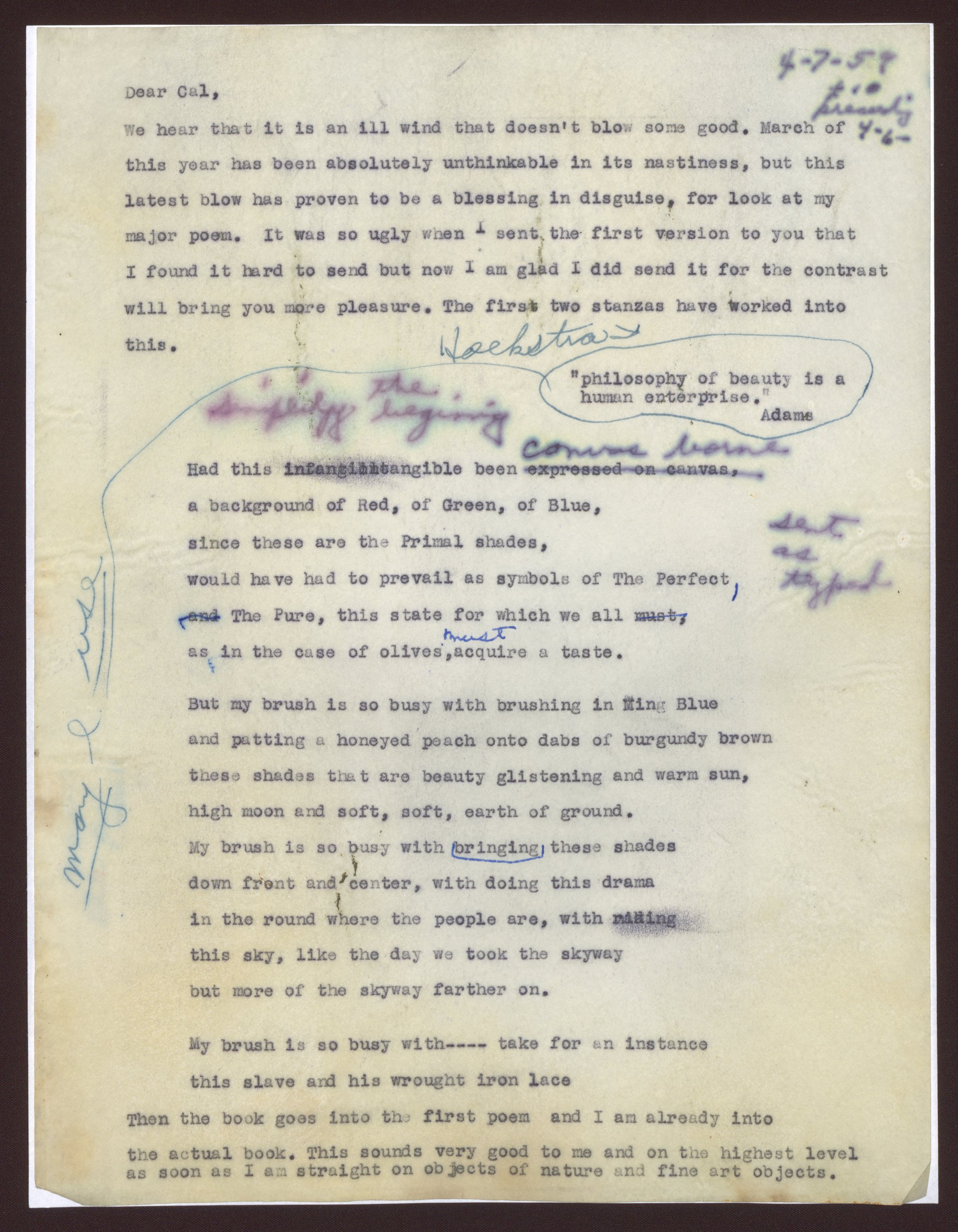 In the second rotation, On Reading Spring explores the vulnerability evident in the early spring’s intermingling of life and death as the decaying humus of the previous year becomes a blanket upon which unfettered shoots and buds rise and flourish. In his diary from Tuesday, June 6, 1944, we encounter the empathetic and haunting meditations of Reverend Doctor Robert Warren Spike as he considers the responsibility of his community toward soldiers plunging into the “personality-wrecking hell” of D-Day: “Those of us here must try to keep the right perspective… the strength of loving that those men in the midst of death just humanely can’t keep.” Only a year later, in the spring of 1945, Edgar Kupfer-Koberwitz would be liberated from the Dachau concentration camp, where he was imprisoned for his pacifist ideology. Among his notes for the diary he would later publish we find a stark list of the crimes he and his fellow inmates endured during the days leading up to April 30th when the freed survivors were met, as Koberwitz emphatically notes, with snow. In 1819 Ludwig van Beethoven was tormented by a child custody case, and, due to his total deafness, increasingly isolated from the world. A springtime commission for a Catholic mass arrived as an inspiring return to symphonic music for the composer who went on to create what conductor John Maclay describes as a work “so intense, heartfelt and original that it nearly defies categorization.” The autograph copy of this soaring achievement known as the Missa Solemnis (Opus 123) was inscribed by Beethoven with the words, “from the heart – may it return again – to the heart.” 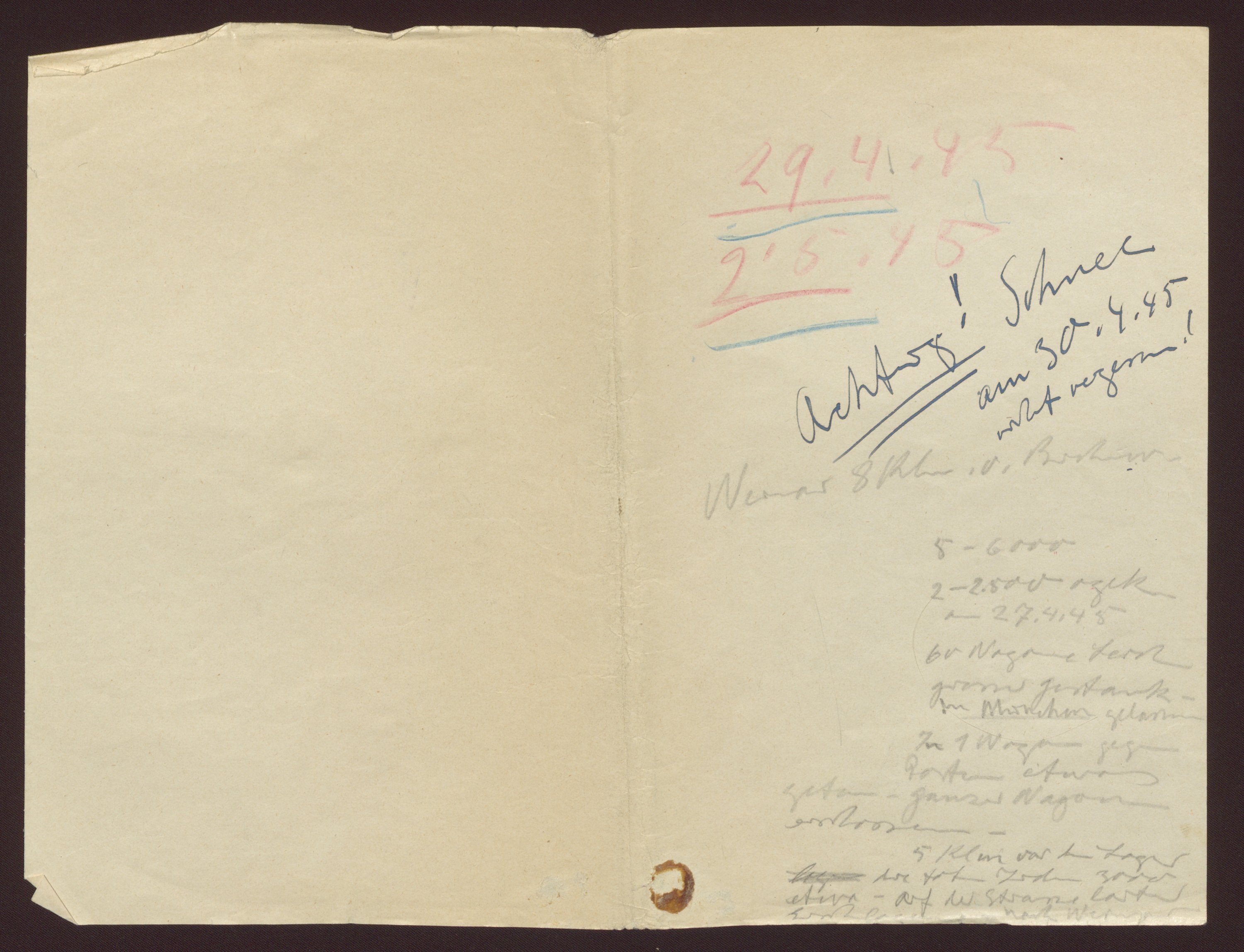 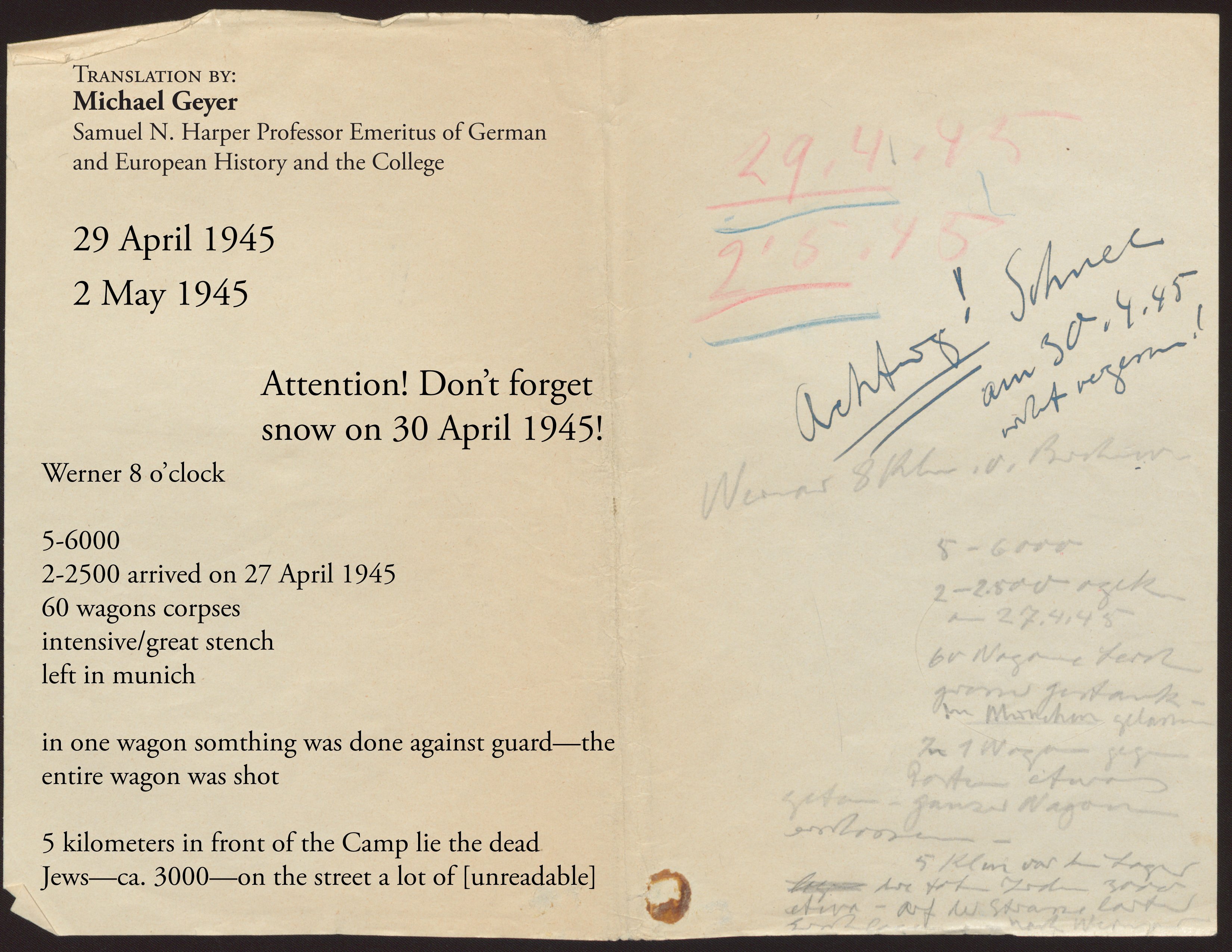 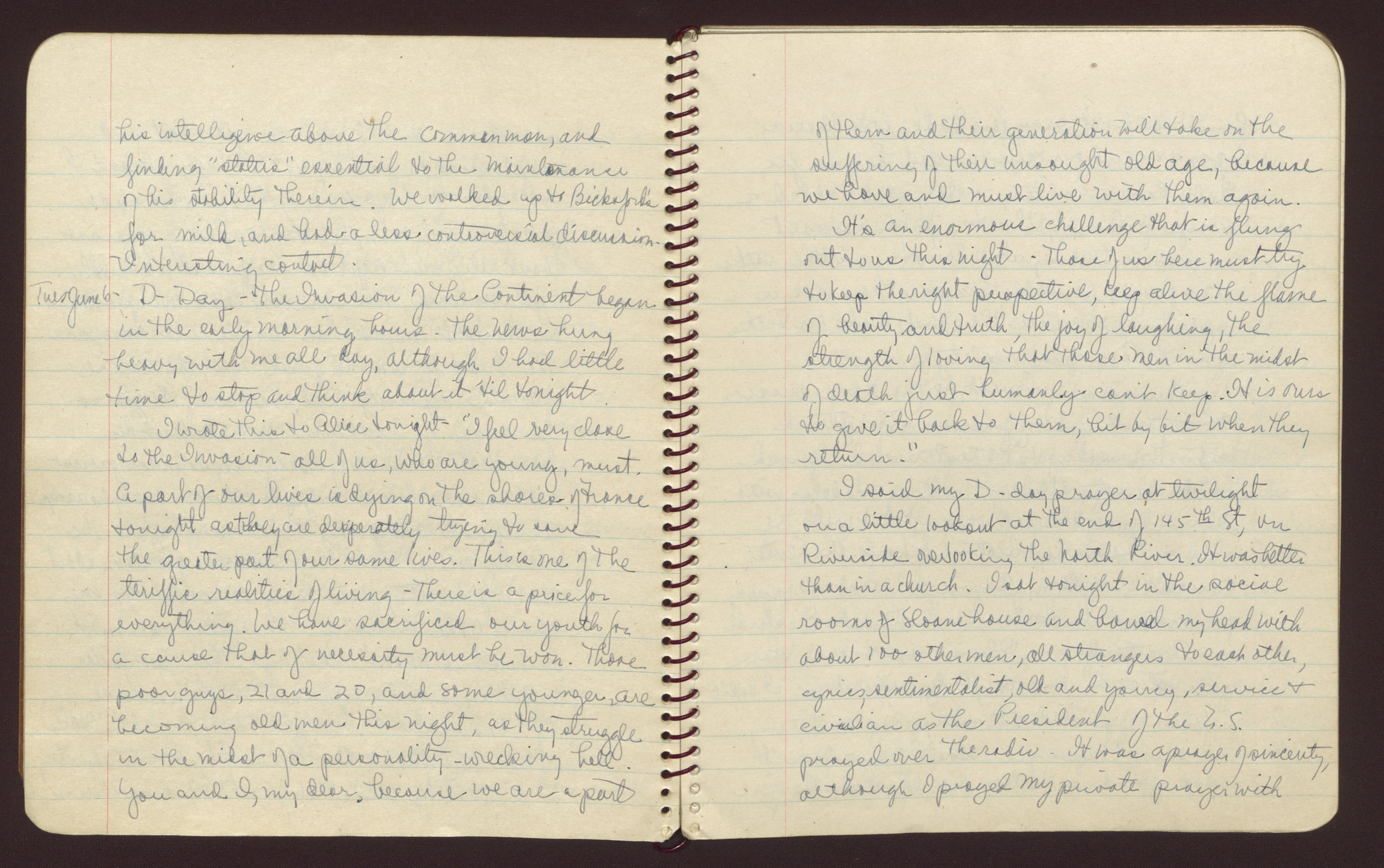 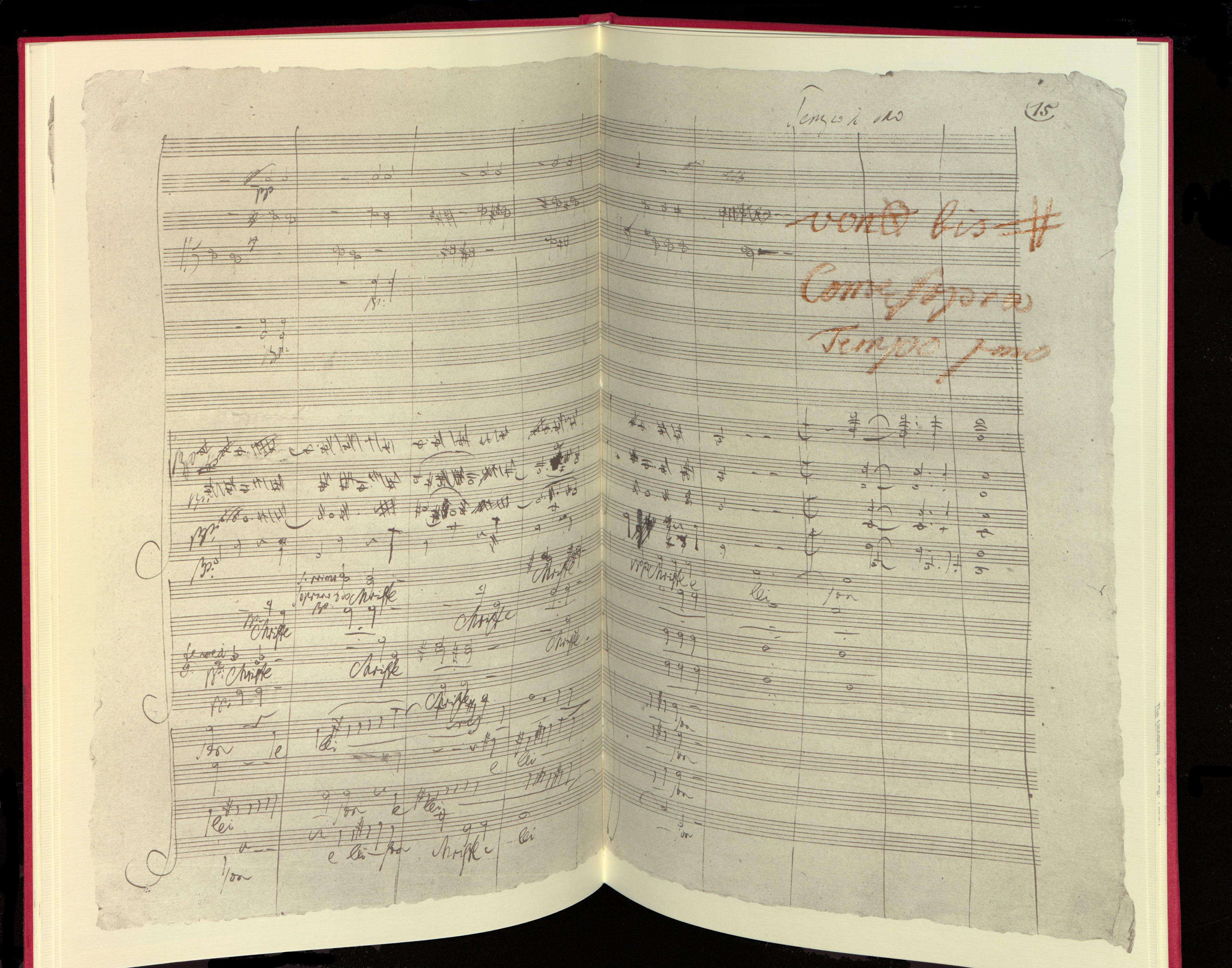 The third installment of On Reading Spring considers the role birds play in signaling the restoration of warmth and life to world as the season truly takes hold. In a diary entry from April 12, 1901, medievalist Edith Rickert recalls “…the beginning of spring, not promise but fulfilment.” She goes on to describe in rich detail a day, opal morning, golden sunset, filled with cuckoos and swallows, all with a tangible sense of awe. She is chagrined in the following entry when she notes that the cuckoos she had waxed so enthusiastically about were in fact wood pigeons, but we nevertheless discover amid her later writings two drafts of a poem very likely based on the powerful experience of April 12th. Poet Hayden Carruth also integrates cuckoos into his 1979 poem Almanach Du Printemps Vivarois, but finds their song a “damned mad invariable sound” and seems to ponder their “meanings, messages, and intimations” with anxiety. The bird finds its role again as herald in Emily Dickinson’s poem on an envelope whose stamp indicates it was received and recycled as a writing surface in March, although the year is unknown. In it she anticipates the events of Easter, when the tuneful song of the spring bluebird is rejected in favor of the longed-for sound of an undone song, a sacred silence that enters the world with the resurrection of Jesus of Nazareth. 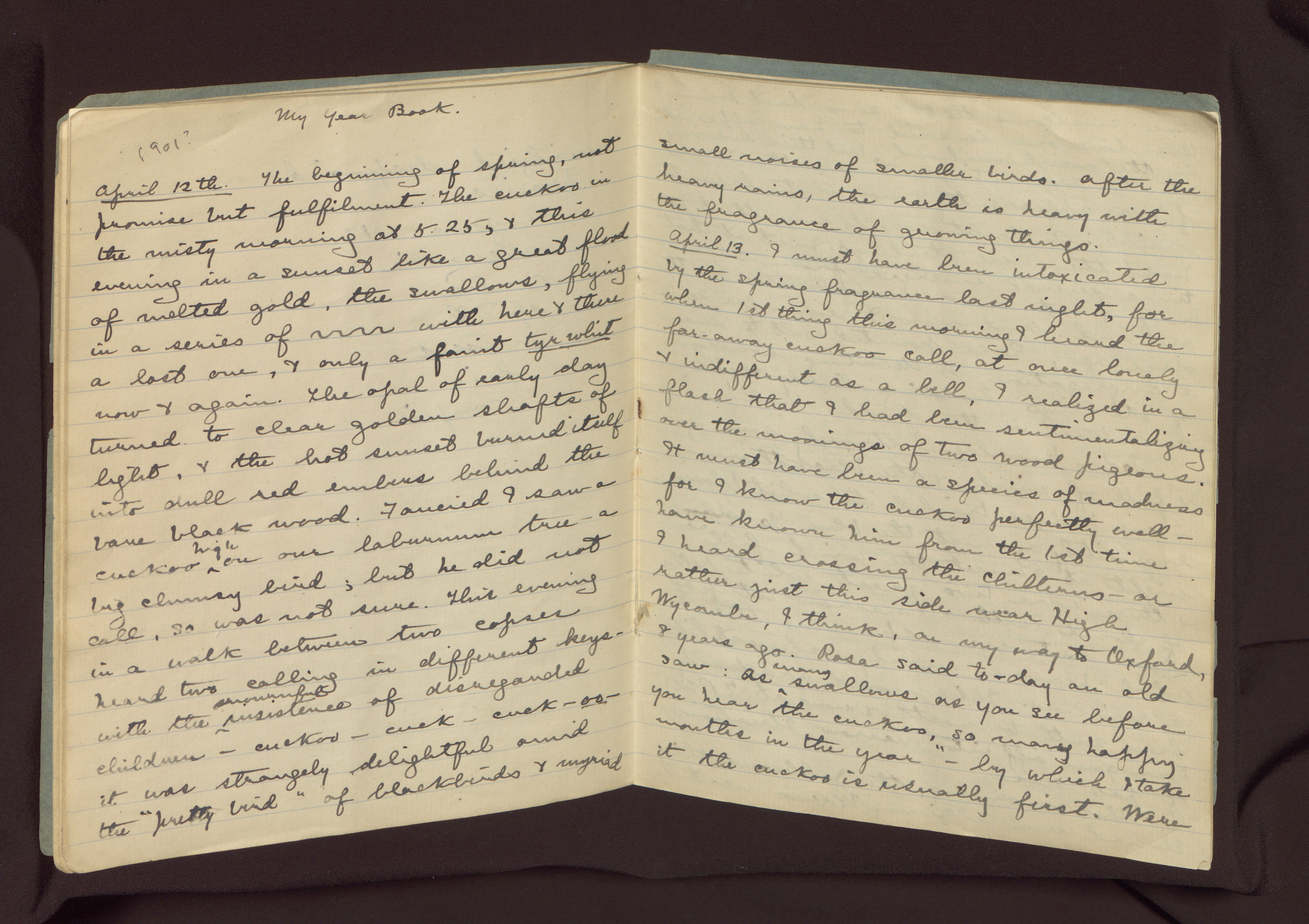 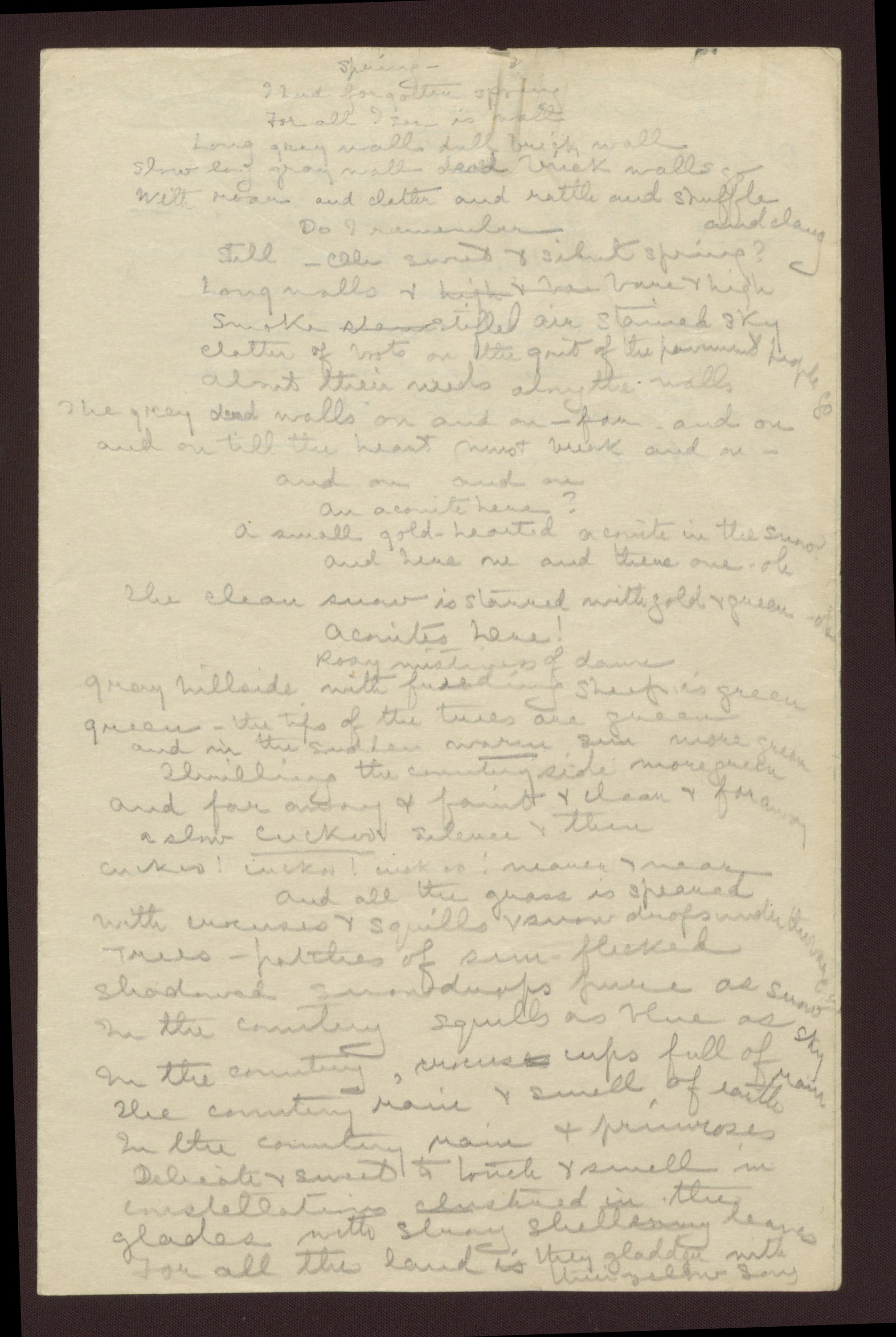 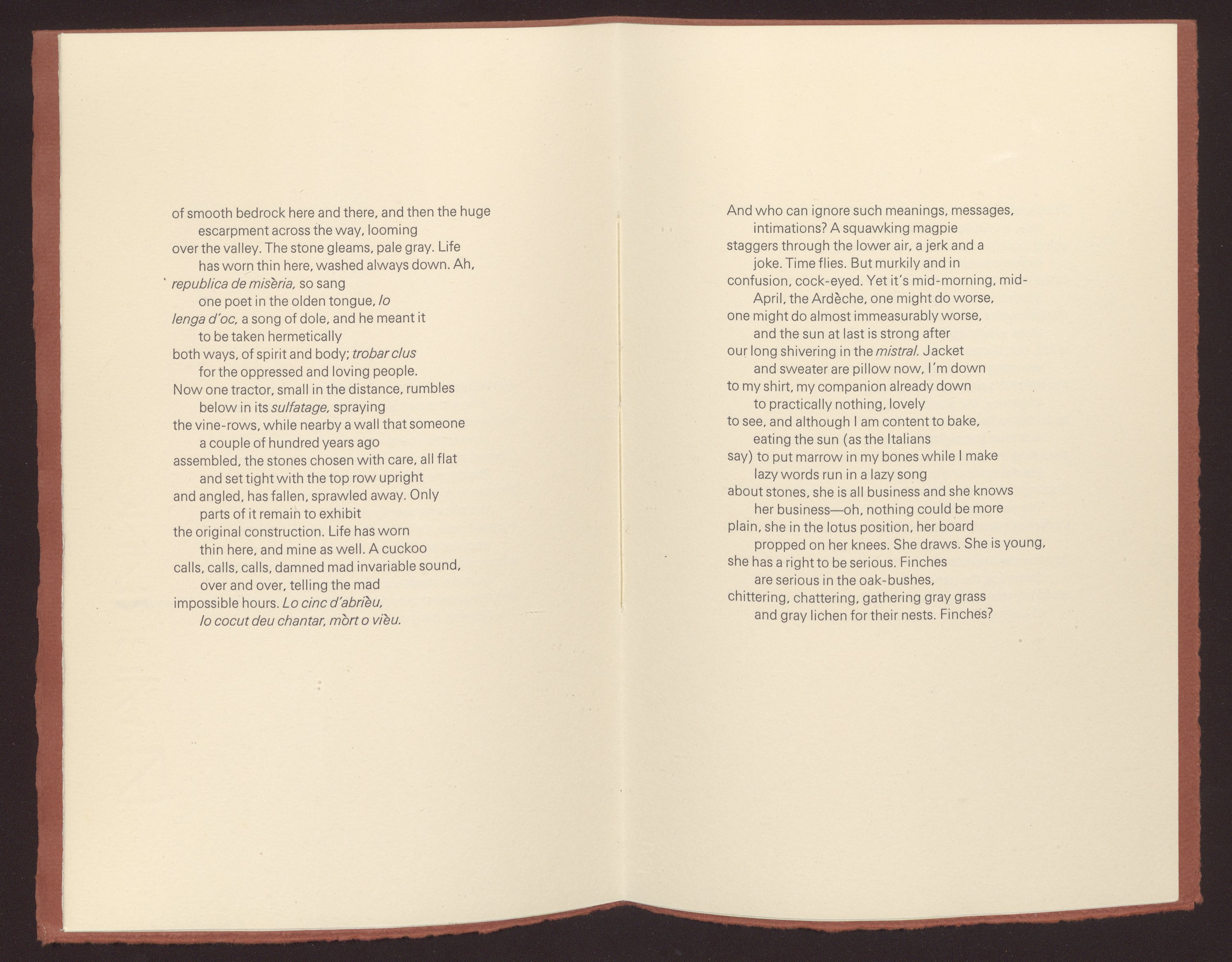 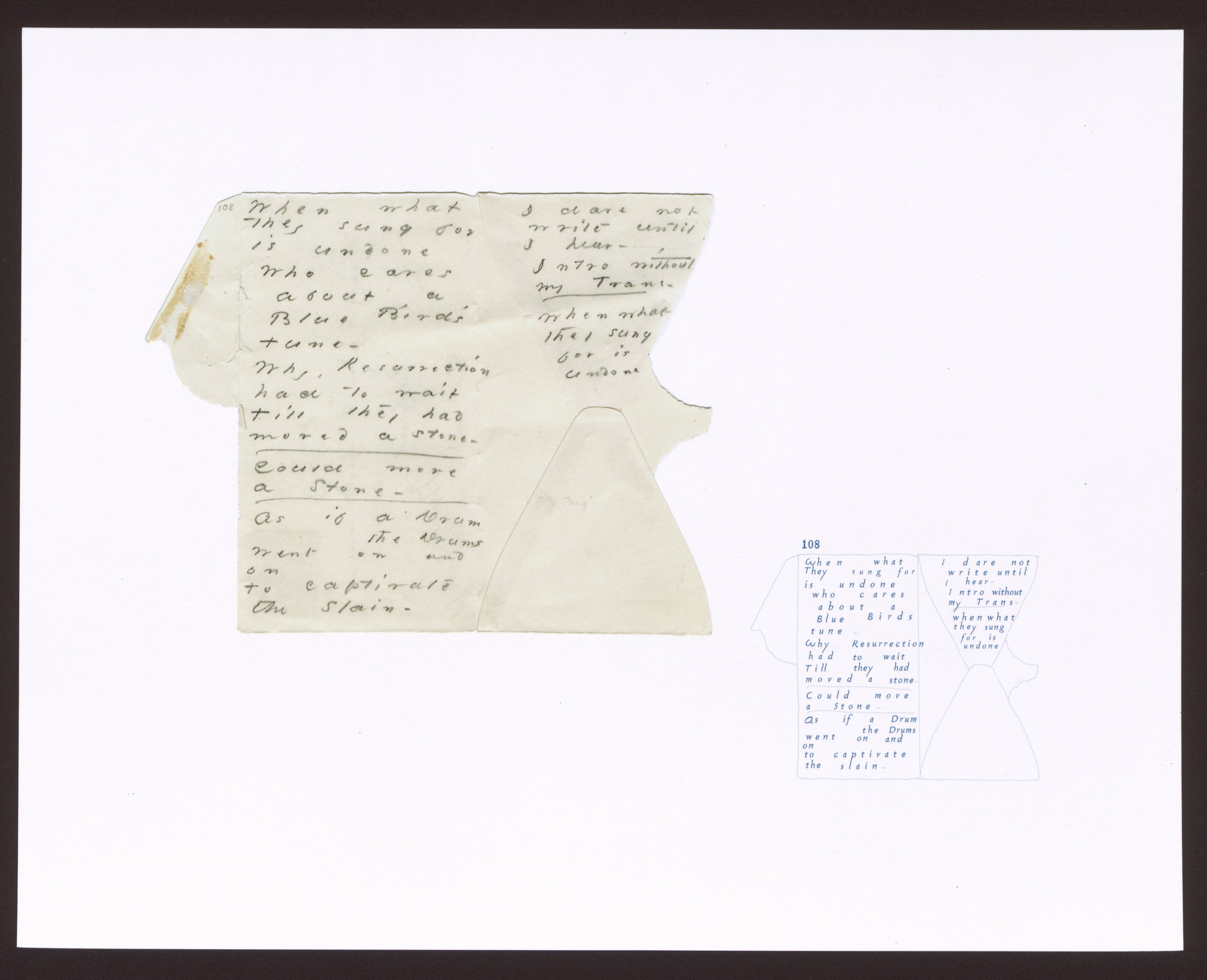 The fourth rotation of On Reading Spring considers the nature of epiphany – a moment of sudden revelation or insight – through the lens of spring’s abundant fertility. The virgin, one of spring’s central actors, is by definition ignorant of that which by necessity they must also know, a paradox that embodies the mystery of creativity itself. In February 1914, Russian composer Igor Stravinsky described The Rite of Spring as "a musical-choreographic work... unified by a single idea: the mystery and great surge of the creative power of Spring.” Within the ballet’s innovative modernity we encounter a horrifying and ancient theme: virgin sacrifice to propitiate a god. This disturbing rite represents the terrifying extreme of humanity’s attempts to comprehend mysteries and direct the world’s uncontrollable forces. The ancient Romans saw the creative paradox as surmountable in a far gentler way, although still bordering on the miraculous. They believed certain animals could be impregnated by the wind through zephyria, or “wind eggs,” a perfect metaphor for a wholly unsought epiphany. In John Dryden’s translation of Virgil’s Georgics we encounter an example of this in his discussion of mares in springtime who “to Cliffs of rugged Rocks repair…When (wond’rous to relate) the Parent Wind, Without the Stallion, propagates the Kind.” Chemist and philosopher Michael Polanyi avoids magic and miracle in his rational explorations of the means by which the unknown unknown can not only be pursued but recognized as such. His 1960 lecture notes on originality introduce us to “indeterminate foreknowledge awaiting indeterminate confirmation and development,” a locatable quantity that can, nevertheless, only be realized with the aid of desire, happiness, and even joy. 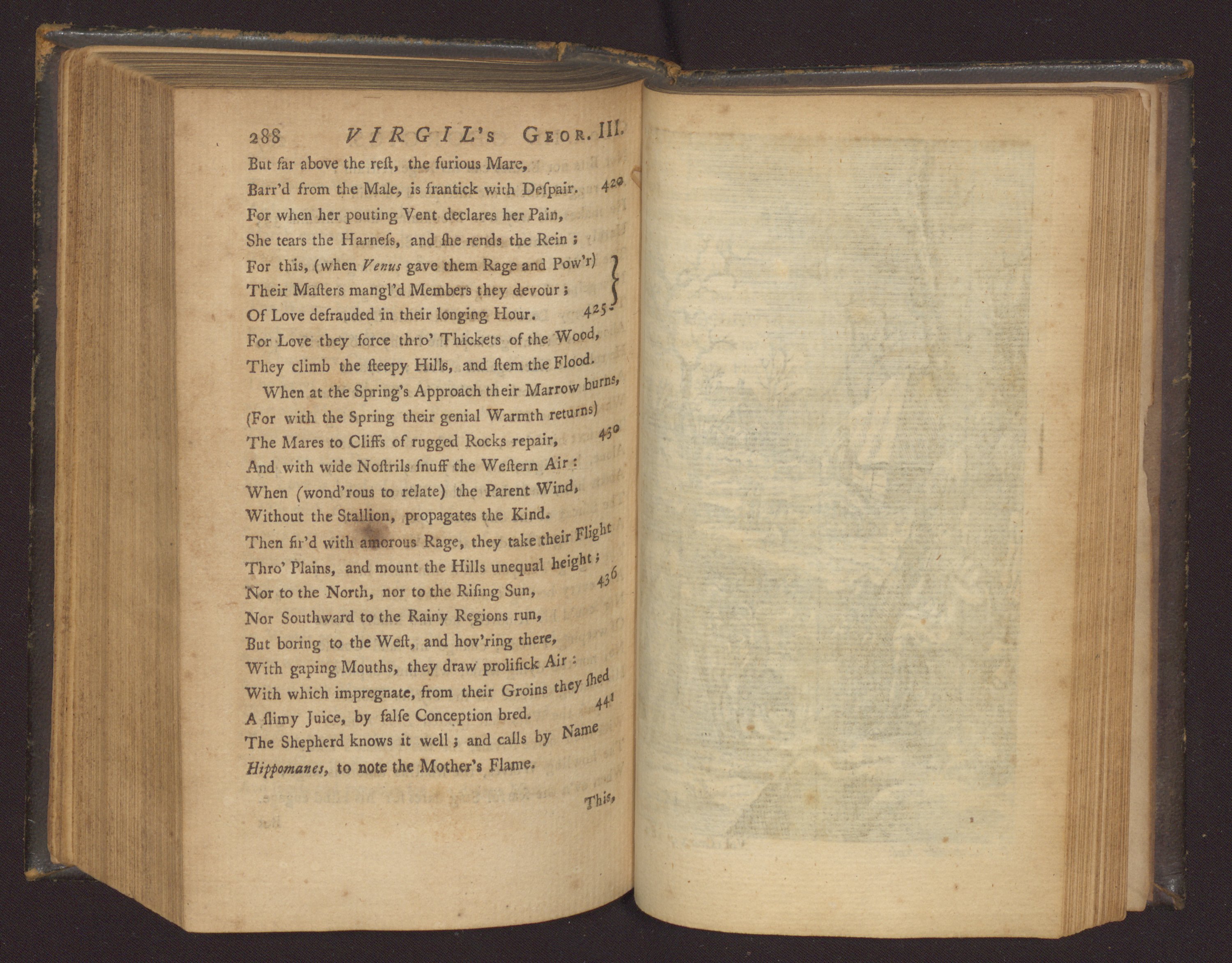 The Works of Virgil 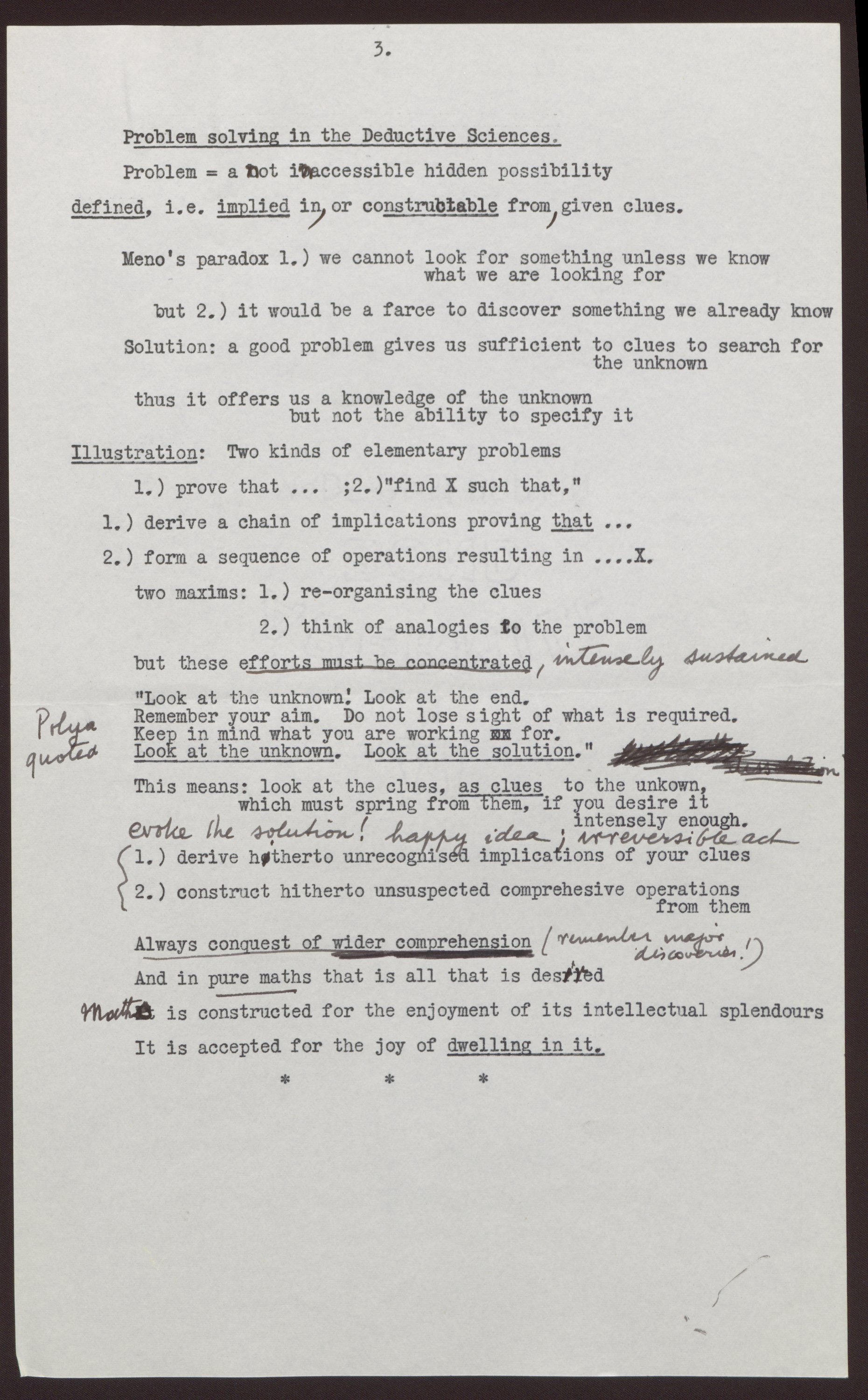 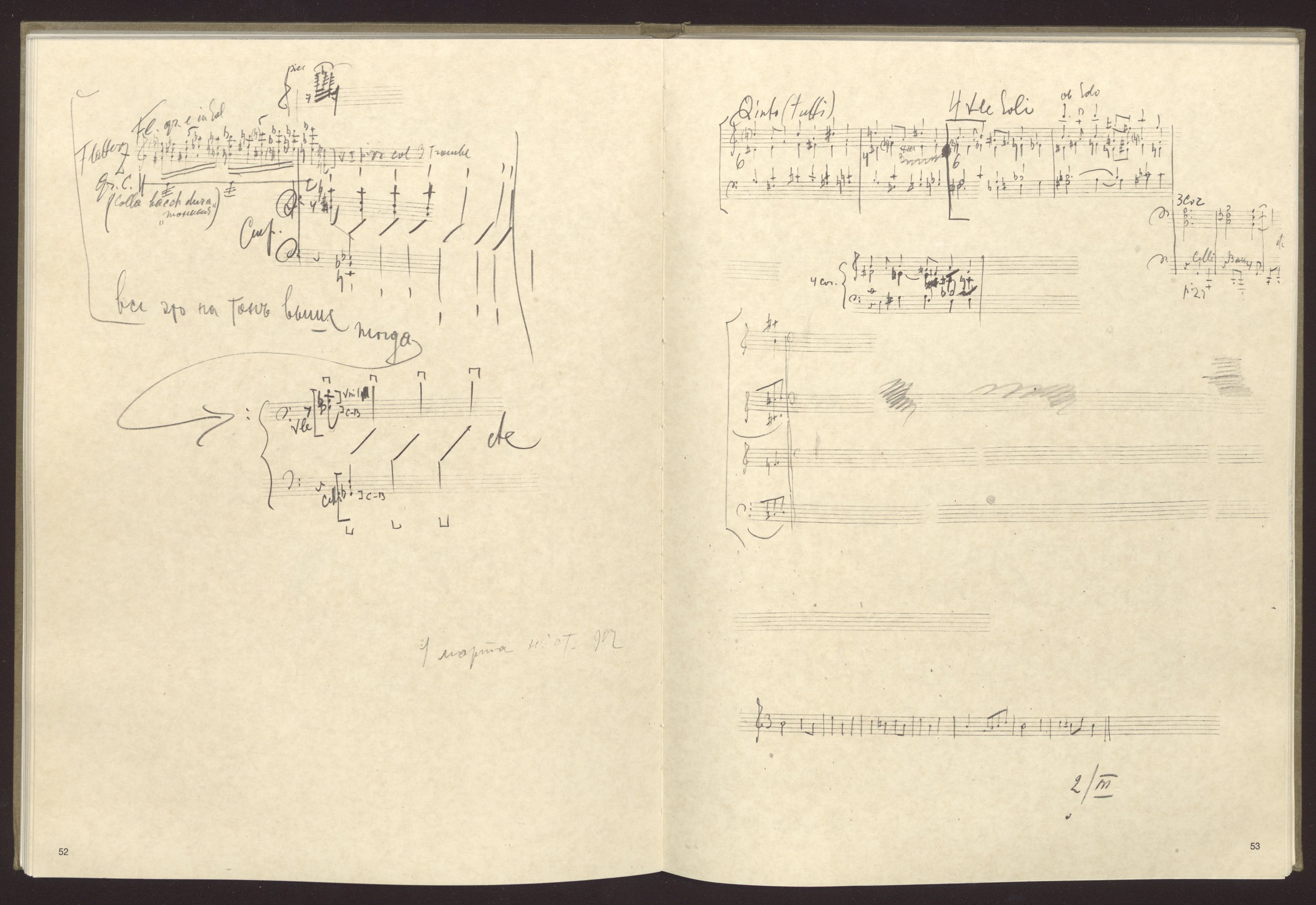 The penultimate rotation of On Reading Spring focuses on tenderness. In late spring, inclement weather still frames the bright warm days that arrive with increasing dependability so that the pleasure with which we greet them is tempered by our recognition of their transience, novelty ever nuanced by nostalgia. Rural journalist, farmer, and poet Adrian Bell’s 1934 poem, Spring, invites us to explore a delicate landscape within which a single day is cherished for its “swift light,” when “we rose again out of our former selves,” renewed despite the frailty of hope and the circuity of memory and knowledge. In a diminutive 1864 pocket diary from an unknown Chicago woman, we encounter a similar day, recorded with a haiku-like simplicity: “Took a bath in the afternoon/ Mr. Treat called/ picked over a gallon of very small strawberries.” On March 6, 1947, scientist Lalitha Chandrasakhar, wife of Nobel laureate Subrahmanyan Chandrasekhar, records that she spent her morning reminiscing on their early courtship. Her initially cool response to his expressions of interest and affection fill her with regret, but by the close of the passage, however, we glimpse an intimacy by now well established: “But how to undo the past? I was in tears. Chandra consolled [sic] me and I felt better.” In Paul Claudel’s 1994 poem, Le Printemps, the tears of joy belong to the poet as he watches his beloved dancing on the grass: …et comme une femme/ Pleurant sous la voile de ses cheveux, je pleurais, et je riais sous un clair rideau de larmes (…and like a woman/ Crying under the veil of her hair, I cried, and I laughed under a pale curtain of tears). 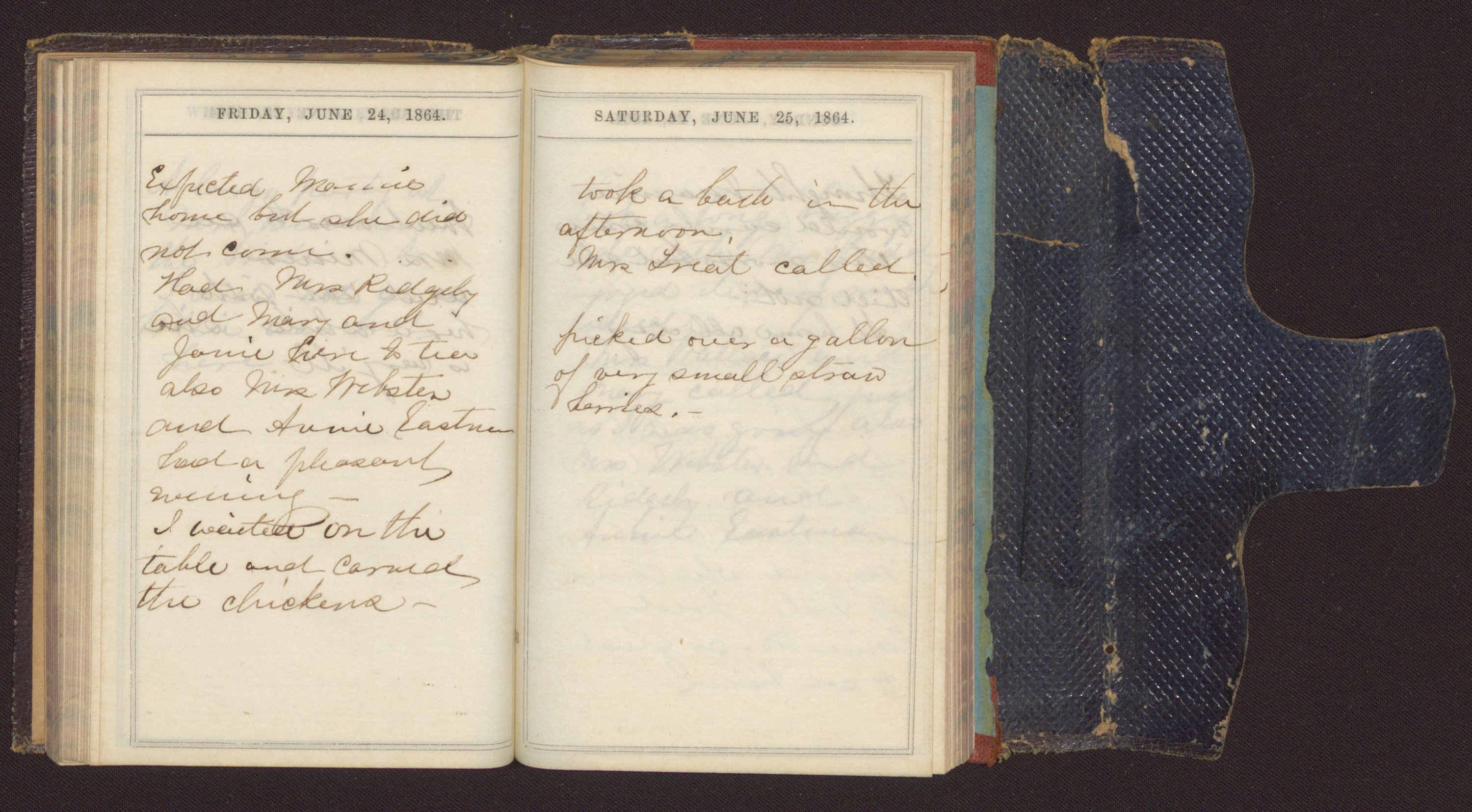 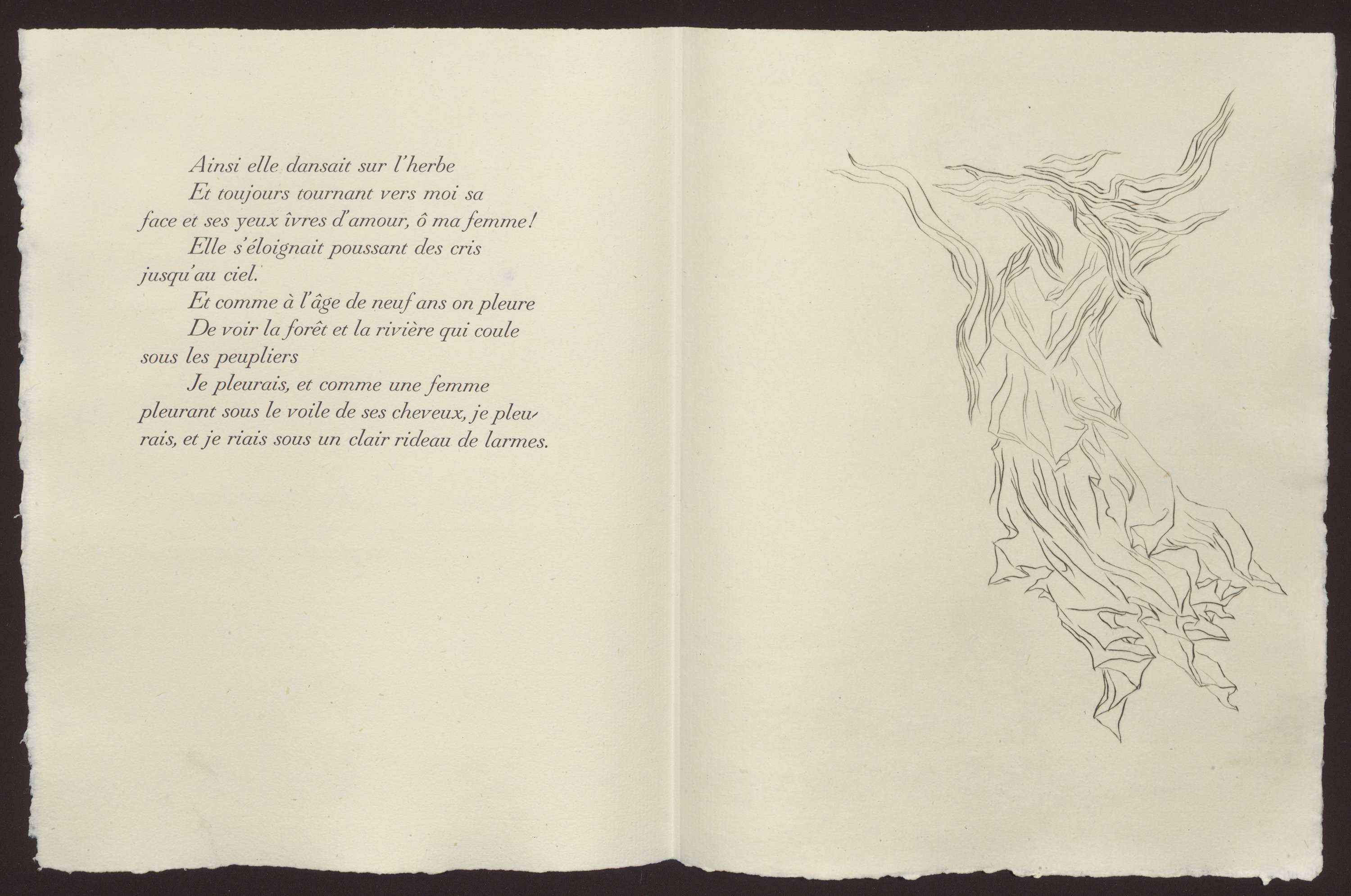 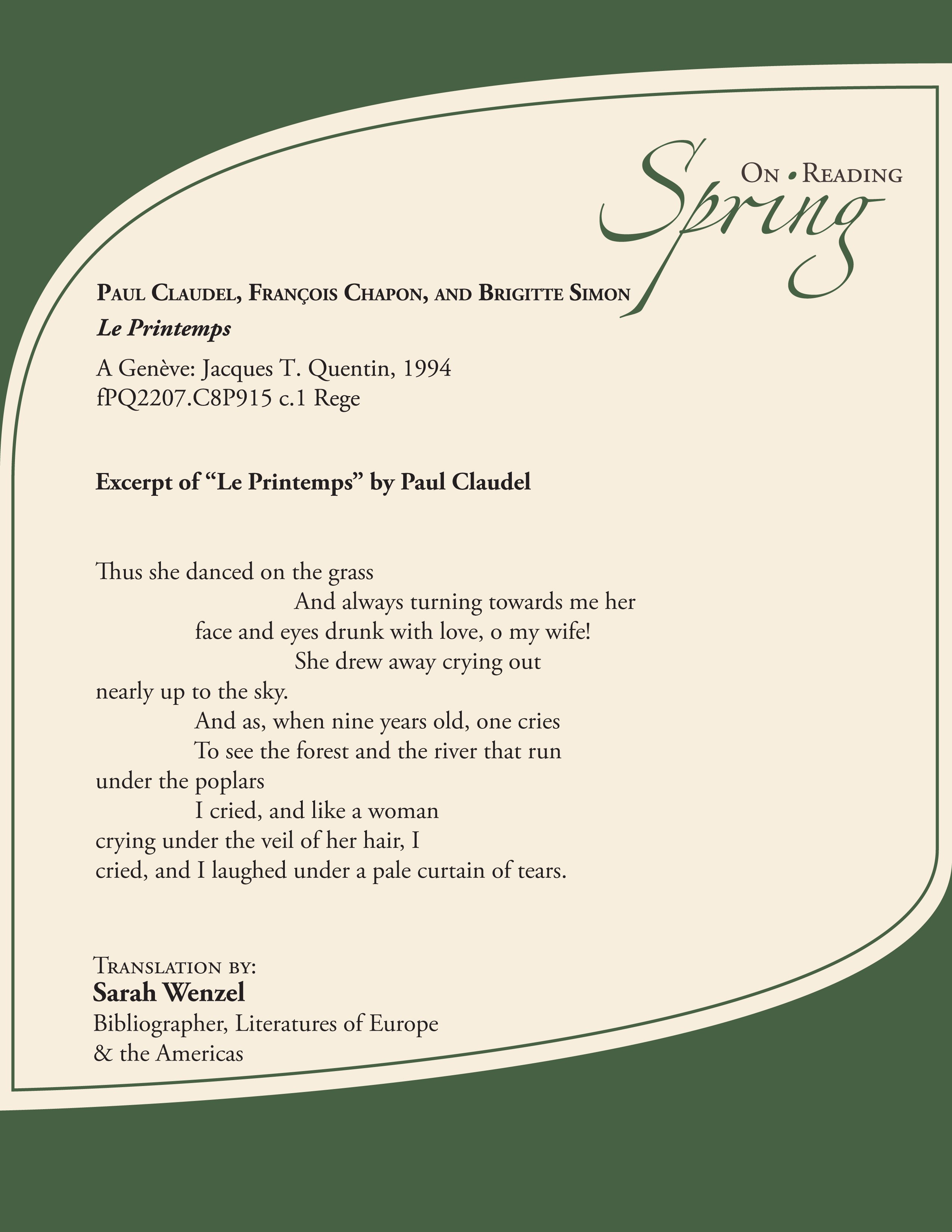 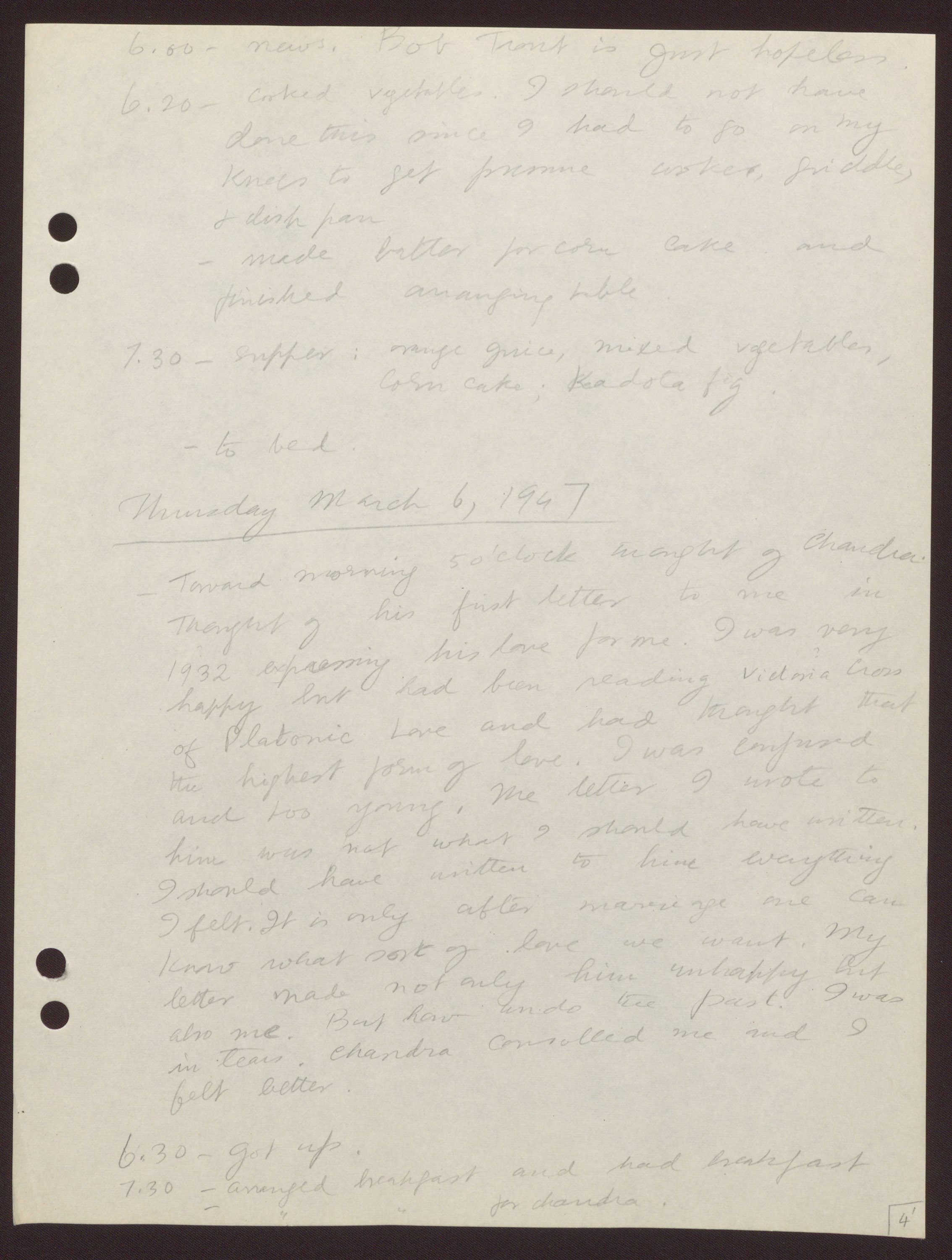 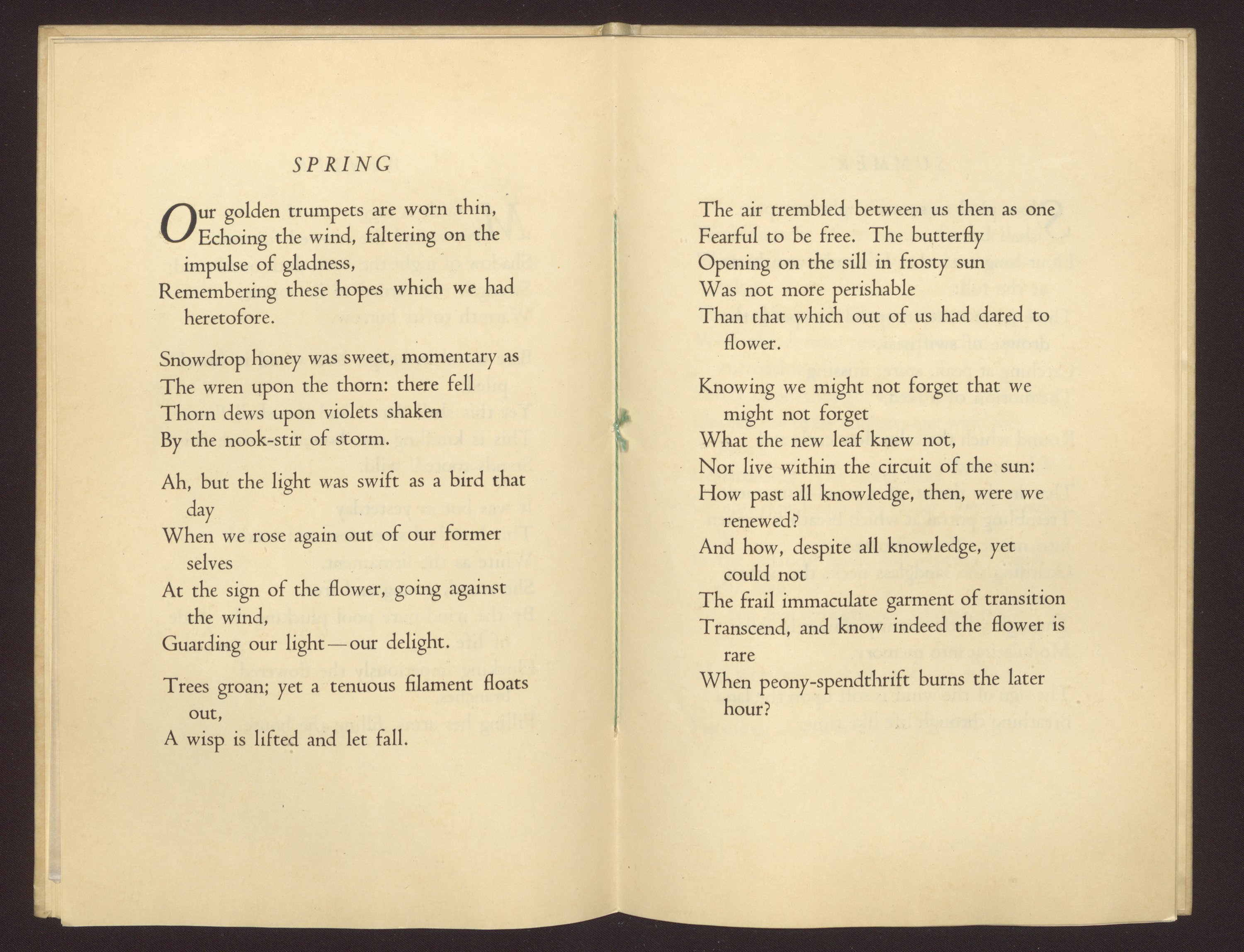 Joy completes On Reading Spring as it considers the moment nature explodes into a riot of color, perfume and uninhibited energy. During this time, spring’s bouquet of scents travel over windblown paths, imitating the irresistible victory of human joy. In a chapter from Hours of Gladness (1912), Belgian playwright, poet, and essayist Maurice Maeterlinck describes the scent of a flower as its soul, a “zone of festive and invisibly magnificent air,” and muses about the apparent uselessness of perfume both to insects, who seem to ignore the most redolent blossoms, and to people, whose resolutely material life cannot comprehend its “joyful tidings.” The 1975 inaugural issue of the University of Chicago’s feminist literary journal Primavera fixes the form of an iris in a latticework of women’s profiles, integrating the architecture of the face into a sinuous cascade of petals. The Japanese homophone hana can mean either “nose” or “flower,” implying, in a similar vein, that one is inexplicable without the other. Shunzan Gafu: Zen (1880), a Japanese book of seasonal design ideas, presents a branch of magnolia in a fan-shaped frame as the quintessential spring blossom. Finally, William Jones’ 1772 English translation of an ode by Ottoman poet Priştinali Mesihi evokes the fleeting nature of youth and beauty through the classical trope of the blooming and fading flower. Even as he repeats this image throughout the poem, he insists we not dwell on transience but embrace joy in the moment and attend to the world’s delights as they arise. 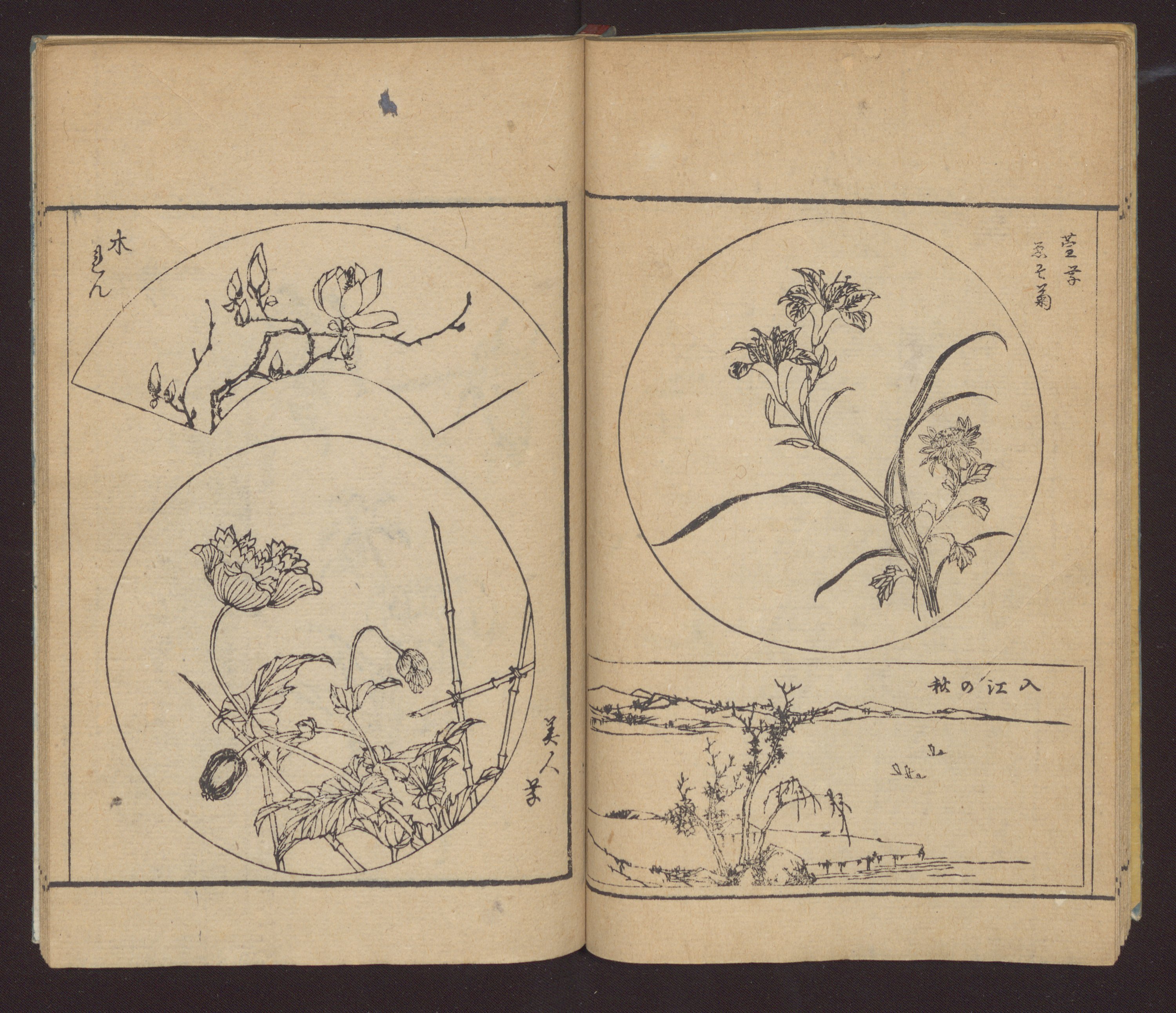 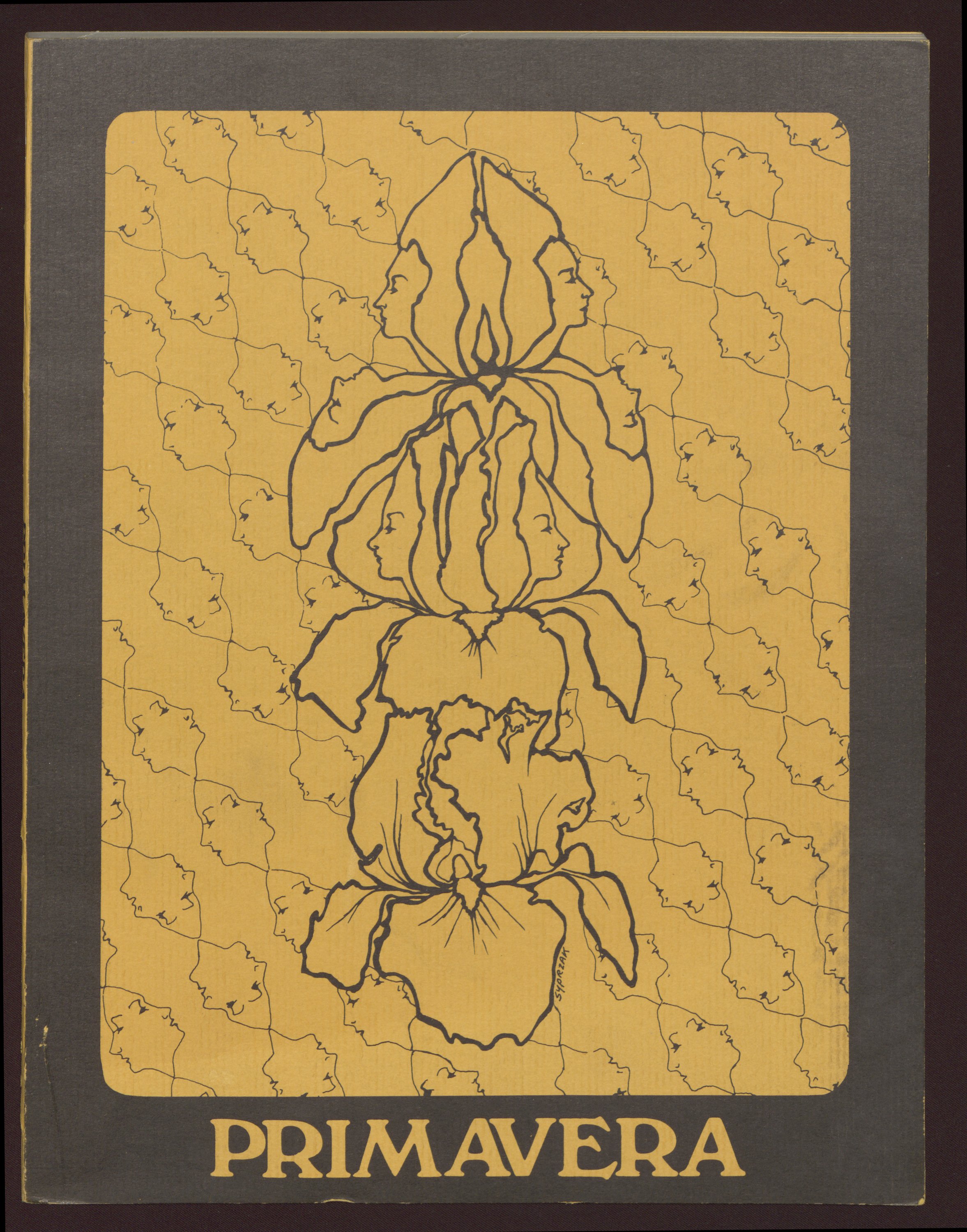 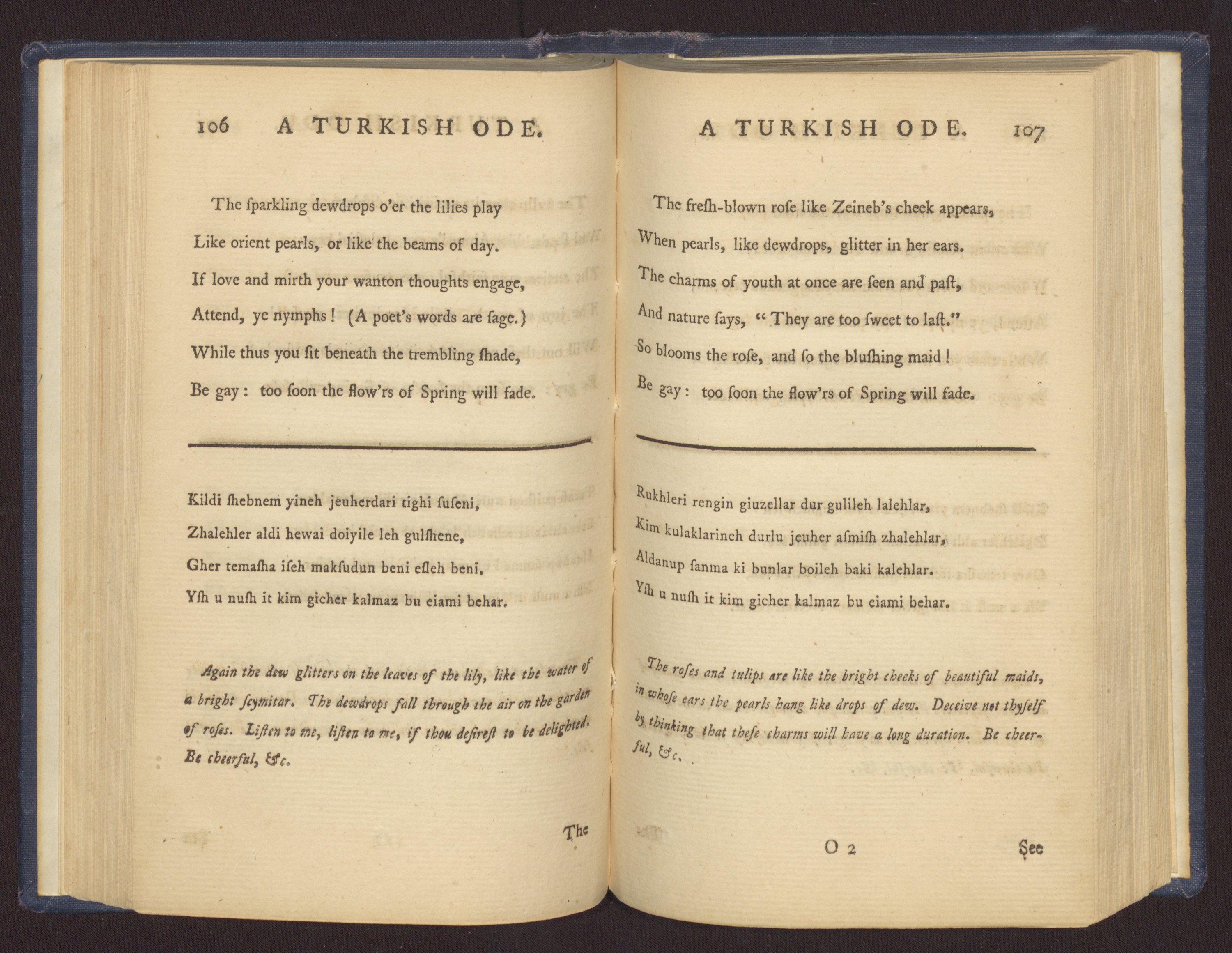 Poems, Consisting Chiefly of Translations From the Asiatick Languages: To Which Are Added Two Essays