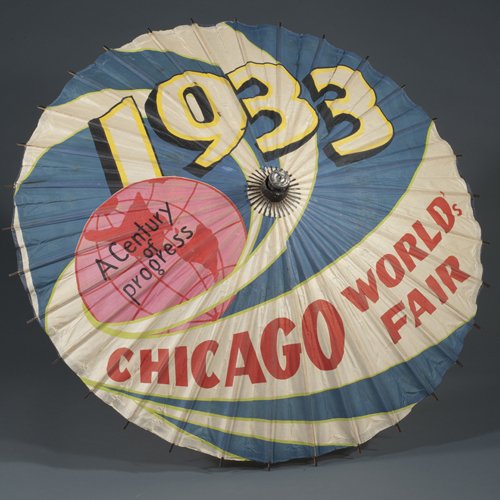 Souvenirs! Get Your Souvenirs!

Souvenirs! Get Your Souvenirs!

Souvenirs! Get Your Souvenirs!  is the latest in an ongoing Special Collections archival series, Discover Hidden Archives Treasures. This installment focuses upon Chicago's two World's Fairs: the Columbian Exposition of 1893 and the Century of Progress in 1933-1934.

The inspiration for this show were objects and ephemera from the Ian Mueller Collection of Chicago Memorabilia. Professor Ian Mueller (1938-2010) was the University of Chicago's preeminent scholar in Greek philosophy of science and the reception of Plato and Aristotle in late antiquity. He may have been best known for his many academic accomplishments, but in his spare time Professor Mueller loved to collect souvenirs and memorabilia relating to Chicago, the University, and the two World's Fairs. The theme of this exhibition also allowed us to draw on other collections in an effort to document these two World's Fairs.

2013 marks the 120th anniversary of the World's Columbian Exposition, open from May to October 1893.  Designed by Frederick Law Olmstead, the fair covered more than 630 acres in Jackson Park and the Midway Plaisance. Over 27 million people visited the fair and saw new inventions and highlights in fields as diverse as mining, agriculture, and the liberal arts. This year also marks the 80th anniversary of the Century of Progress International Exhibition, which was a celebration of the centennial of the City of Chicago and – as the programs and souvenirs illustrate – a fair dedicated to technological innovation. Over 48 million people visited the fair, which took place on Chicago's lakefront, between 12th and 39th Streets. Though science and technology were the main themes of the exposition, the fair also included venues dedicated to American history, printing history, religious groups, and specific corporate sponsors; as well as venues for other countries to highlight their history and tourism.

Souvenirs! Get Your Souvenirs! celebrates these expositions with a special attention paid to the ways in which visitors memorialized their travels through keepsakes and ephemera – from postcards, ticket stubs and guidebooks to home décor, and commemorative medals.

As a special feature, take a Historypin tour, inspired by postcards of Chicago from the Ian Mueller Collection of Chicago Memorabilia.