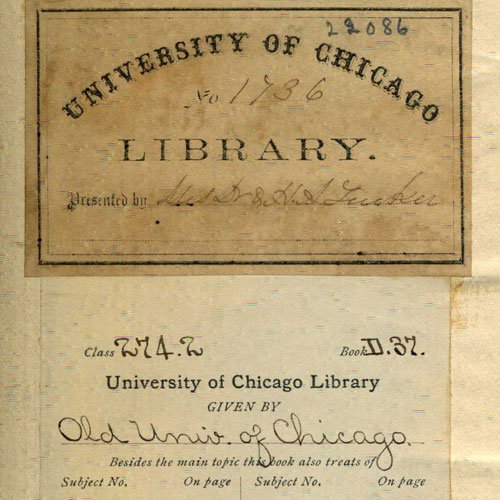 "A Case for Reparations at the University of Chicago": Sources

Collections & Exhibits > Exhibits > "A Case for Reparations at the University of Chicago": Sources > The Library Connections > Old University Books

The Old University of Chicago Library was a broad collection of standard academic publications, almost entirely in English and published in the mid-19th century. In 1912, Harper Memorial Library opened, which held the General Collection. In 1970, the Joseph Regenstein Library opened and the General Collection for undergraduates was merged with the departmental libraries. At this point, most of the volumes of the Old University of Chicago Library were reunited under one roof.

Volumes from the original collection can be identified by the presence of a bookplate from the original library or a gift acknowledge plate added later. Below are images of all the types of plates that have been identified thus far. If you find a book with such a plate in our stacks, please alert Anne Knafl or Nancy Speigel .