While there are no national parks in Illinois, the state is home to a number of national historic sites and monuments, including the Lincoln Home in Springfield and sections of the Lewis & Clark National Historic Trail. In 2015, the city of Chicago became home to the 406th National Park Service site with the establishment of the Pullman National Monument. This national monument is what remains of the planned company town George Pullman founded in 1880 on what is now the far south side of Chicago. The town originally included factories to manufacture his luxury railroad cars, other public buildings, and accommodations for workers, mostly row houses that were of high quality. Many of the row houses and a few other original buildings remain.

Professor of Botany Henry Chandler Cowles was a champion of the movement to have the lakeshore recognized as a national park beginning in 1899 with the publication of an article about the ecology of the dunes in The Botanical Gazette entitled “The Ecological Relations of the Vegetation on the Sand Dunes of Lake Michigan.” 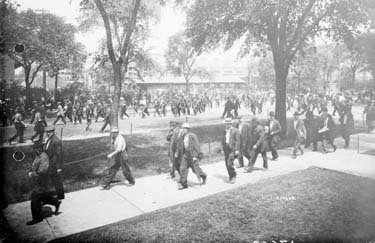 Workers walking near the Pullman Car Works
From: The Chicago Historical Society.