The Colossal Statue of Tutankhamun

From 1926 to 1933, the OI excavated at the Egyptian site of Medinet Habu, from which it was able to acquire over 8,000 artifacts for the museum. The colossal statue of Tutankhamun was one of these. The original statue stands at over 5 meters (16.4 feet) tall and weighs approximately 6 tons. It was created during the reign of Tutankhamun (1355-1346 BC) and holds the distinction of being the tallest ancient Egyptian statue in the Western Hemisphere. When OI archaeologists, including Uvo Hölscher, made this discovery in 1930, the statue was found in three pieces, namely the crown, head, and torso, which were gifted to the OI by the Egyptian government. The statue has an almost identical twin found at the same mortuary temple of Ay and Horemheb. This second statue, which was more complete, is now located in the Egyptian Museum in Cairo. Both statues are made of quartzite with some paint from modern restoration. After being brought to the OI, the pieces were mounted on a metal framework and joined together. The legs and base were constructed using man-made materials so that the statue could assume its original height. All of the missing features, arms, legs, neck and chin are also modern restoration. It was good fortune that the statue in Cairo was more complete, as it provided a reference from which to work. All of the restoration work took place at the OI from 1933-34 and was completed by Donato Bastiani and Maurice Bardin. 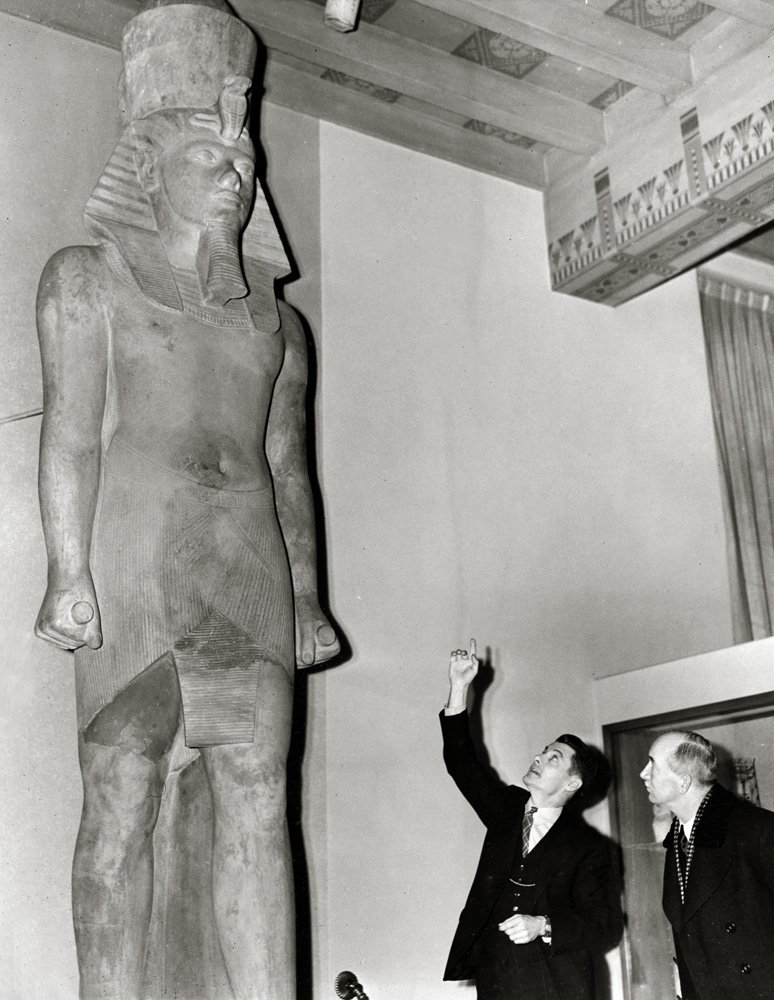 John A. Wilson (left), professor of Egyptology and director of the Oriental Institute at the University of Chicago. He is pictured in the Tutankhamun exhibition with Edvard Beneš (right), former president of Czechoslovakia and a visiting professor of the university.