Collections & Exhibits > Exhibits > On the Edge: Medieval Margins and the Margins of Academic Life > Gargoyles

“Most of these ferocious and maleficent physiognomies, some gloating, laughing, or screaming, share one thing: they all look down on us.” -- Michael Camille, The Gargoyles of Notre-Dame: Medievalism and the Monsters of Modernity (2009)

Emerging from the medieval past through our modern fascination with them, gargoyles have come to symbolize the University of Chicago. Technically the grotesque figures carved in stone that spout water away from buildings, the term gargoyle is now used to refer to any grotesque carving on Gothic edifices. Architect Henry Ives Cobb designed the University of Chicago’s neo-Gothic campus, complete with pointed arches, towers, and turrets, and of course, the beloved gargoyles peering down from Cobb gate and buildings around the quad. The gargoyle now serves as an unofficial mascot 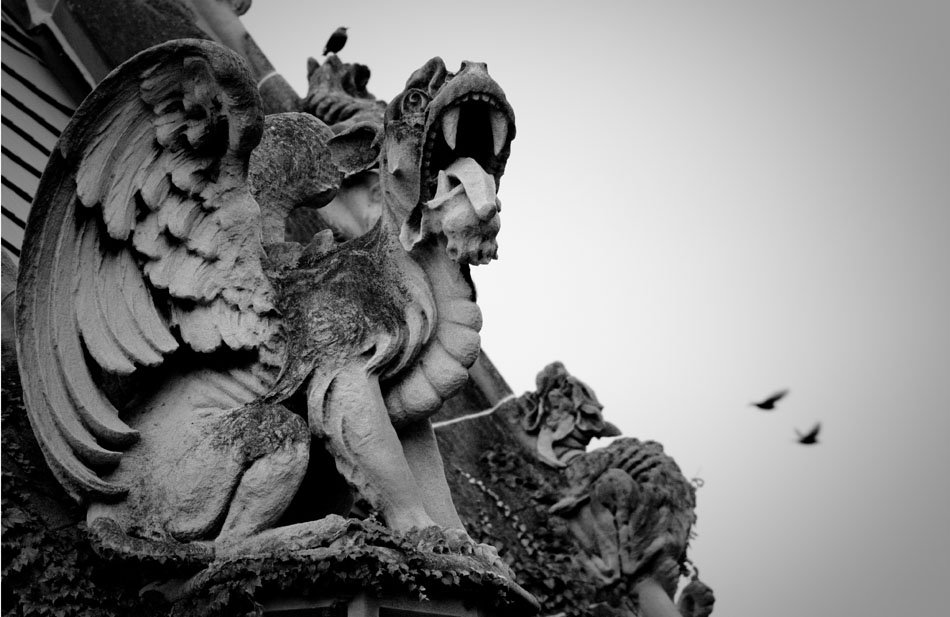 Although these texts are today separate manuscripts, they were part of a whole for over 500 years. Shortly after the ascent of Charles V to the throne in 1364, these manuscripts were illuminated by the Master of Saint Voult in Paris. They remained bound together until 1907 when they were separated for sale. The shared provenance of the manuscripts is evidenced by the strikingly similar formal characteristics and mise en page. Both opening pages are framed by gold and blue bars with ivy leaves on hairline stems. A closer look reveals nearly hidden dragons perched like gargoyles in the ivy above the right column in each manuscript.

The principal texts of the manuscripts are the Roman de la Rose and Le Jeu des échecs moralisé (The Book of Chess). The Roman de la Rose, one of the most popular works of literature in the Middle Ages, is a dream-vision allegory in which the main character falls in love with a rose. Written almost simultaneously with the completion of the Rose, Dominican friar Jacobus de Cessolis based “The Book of Chess” on a sermon that used the game of chess as an allegorical framework for moral society. The decision to compile these works into one manuscript opens the possibility of new themes and interpretations.