"The Natives are Studying Themselves": Studying Queers/Queer Studies at the University

The University of Chicago has a strong claim to being the birthplace of the academic study of sexuality, with the Chicago School of Sociology viewing sexual behavior as a legitimate object of social science research. Students in Ernest W. Burgess's courses on social pathology wrote term papers about gay speakeasies and cabarets and interviewed the men they met there.

Some of the sociological research was clumsy and guided by notions of "normal" sexuality. A set of 1934 field notes show that a researcher hired a sex worker to try to convince a homosexual to "take the masculine role," exploiting both of the participants in the process. But some students used their academic work to enter into the homosexual world themselves: Drag queen Fay Templeton recalled that she had dated men from many local universities for research purposes; another student who wrote an undated term paper on "restlessness in women" explicitly addressed her own interest in the subject.

Considering the Burgess papers, we might wonder whether the nature of scholarship changes when people who study sexual identities are able to be open about their own. Esther Newton (AM 1966, PhD 1968) wrote a dissertation about drag queens, the first major anthropology of a homosexual community in the United States. A comic drawn by Kelsey Ganser (AB 2012), who interviewed Newton in 2013, reveals some of the ways Newton struggled with gendered self-presentation while at the University. Years later, Newton informed her dissertation advisor, David Schneider, that she now had a number of students who were self-identified lesbians working on lesbian themes, joking, "[T]he natives are studying themselves!"

Although at the time the study of sexuality was rarely an explicit part of the College curriculum, narrators from the 1960s through the 1980s remember writing papers that dealt with sexuality and the ways that their own sexuality influenced their course of study.

In the late 1980s, faculty including Leora Auslander in History, Mary Becker at the Law School, Lauren Berlant in English, and Elizabeth Helsinger in English and Art History ran the Feminist Theory and Gender and Society workshops. After over a decade of organizing by faculty and students, in 1996 the Center for Gender Studies was founded as an academic research center. In 1997 the concentration/major in Gender Studies was established and Professors George Chauncey of History and Elizabeth Povinelli of Anthropology founded the Lesbian and Gay Studies Project at the Center. The Center was renamed the Center for the Study of Gender and Sexuality [CSGS] in 2011. Objects in the case highlight some of the events that the CSGS has sponsored and hosted over the years.

The CSGS was founded in a context of national expansion of queer studies as a field. Programs from the First National Graduate Student Conference and Fifth National Conference on Queer Studies suggest the rapid growth of the field. The 1993 zine Judy! was created by University of Iowa students; it speaks to the way that queer studies re-imagined the relationship between subject and object, with Judith Butler becoming the subject of speculation, gossip, and fantasy. 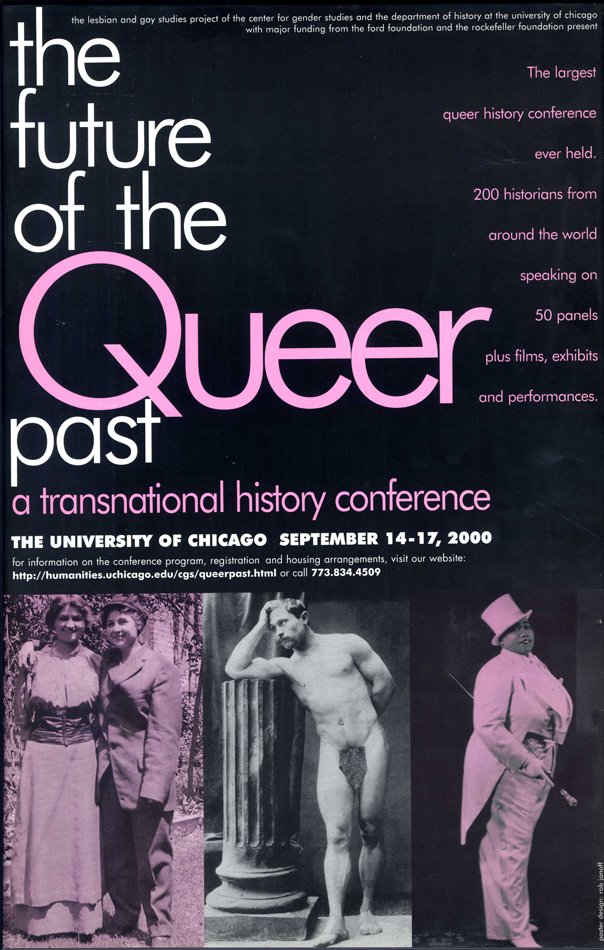 Future of the Queer Past
Broadside,  2000

On loan from the Center of Studies on Gender and Sexuality