Collections & Exhibits > Exhibits > Homer in Print: The Transmission and Reception of Homer's Works > The Children's Homer

Homer was a staple of the schoolroom in antiquity, used to teach reading, grammar, and rhetoric. Despite concerns on the part of early Christians about teaching the works of pagan authors, allegorical interpretations made it possible to extract moral and ethical lessons from Homeric myth and assured survival of the texts into the modern era.

As attitudes toward childhood began to change, a new genre of books written for children began to emerge. Designed to entertain and delight – as well as instruct – these often drew on folktales and mythology, The Iliadand the Odyssey became popular sources of stories that would appeal to children's love of adventure, heroic characters, and myths: the Abbé Fénelon's Les Avantures de Télémaque fils d'Ulysse (1699) was so successful that it was translated into English the following year.

Children's book publishing expanded rapidly in eighteenth-century England, stimulated by changes in the book trade and a growing middle class. Writers of moral tales – many of them women – emphasized religious and didactic principles including patience, perseverance, reason and prudence, hard work, and self-improvement, while Romantic authors encouraged stories – folk legends, myths, and ballads -- that stimulated a child's imaginative faculties. Charles Lamb's Adventures of Ulysses, published in 1808, is typical of the liberties taken to condense and self-censor such tales to eliminate descriptions and behaviors unsuitable for children.

Retellings and adaptations of classic literature for children remain a staple of the industry. Versions of the Iliadand the Odyssey have been produced in handsome editions, comic books, and pop-up books, by noted authors for both children and adults. Illustrations -- always an essential element of the overall design and conception in children's books -- plot abridgement, and character simplification all help focus attention on the action, ensure the enduring appeal of the stories to children of all ages and all eras. 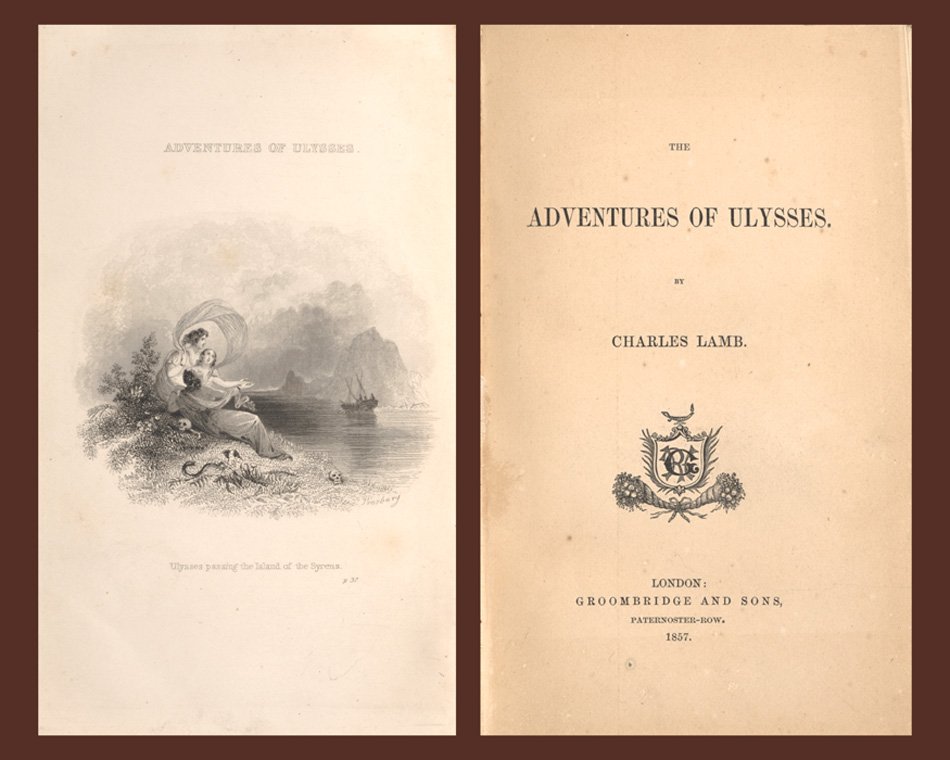 
The Adventures of Ulysses
London: Groombridge and Sons, 1857.

This history tells of the wanderings of Ulysses and his
followers in their return from Troy, after the destruction
of that famous city of Asia by the Grecians.

The Adventures of Ulysses, first published in 1808 by William Godwin, was based on Chapman's Odyssey, which Lamb admired above all other translations. He turned it into prose, simplified the order of the narrative, abbreviated or combined episodes, and deleted descriptions and whole books in order to present Ulysses as an unblemished hero and eliminate anything inappropriate for young readers. 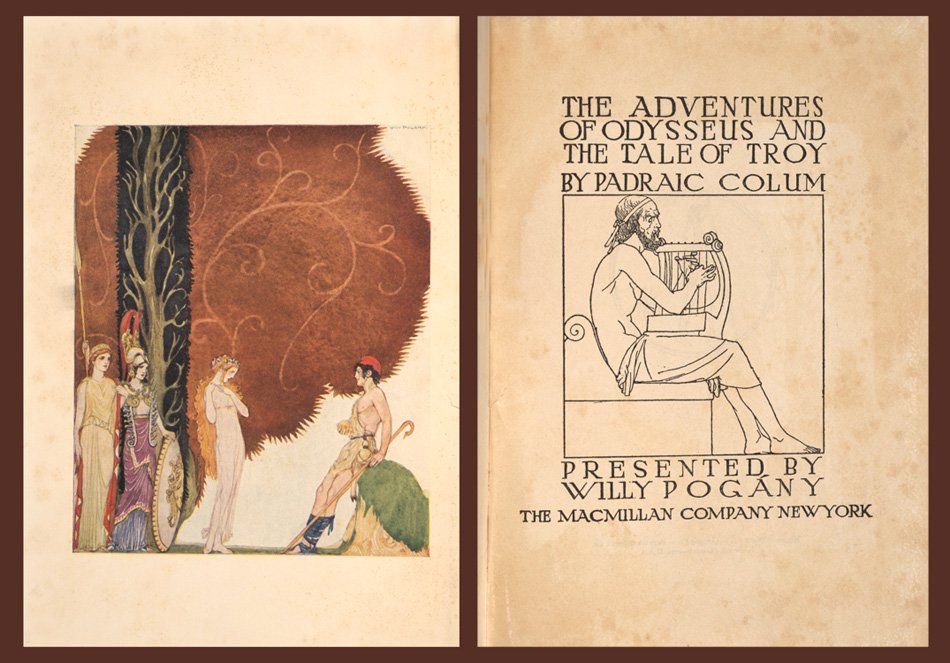 
The Adventures of Odysseus and the Tale of Troy. . . .
New York: The Macmillan Company, 1918.
Illustrated by Willy Pogány.

This is the story of Odysseus, the most renowned of
all the heroes the Greek poets have told us of—of
Odysseus, his wars and his wanderings.

Irish poet and playwright Padraic Colum wrote a number of children's books over the course of his career. Colum's poetry draws on oral folk tradition and displays his talents as a storyteller, as does his successful adaptations of the classics and mythology. The Adventures of Odysseus and the Tale of Troy, which combines the stories of the Iliad and the Odyssey in one volume, has the spine title "The Children's Homer" and illustrations by Hungarian book illustrator Willy Pogány, who also illustrated Colum's 1916 children's novel, The King Of Ireland's Son. 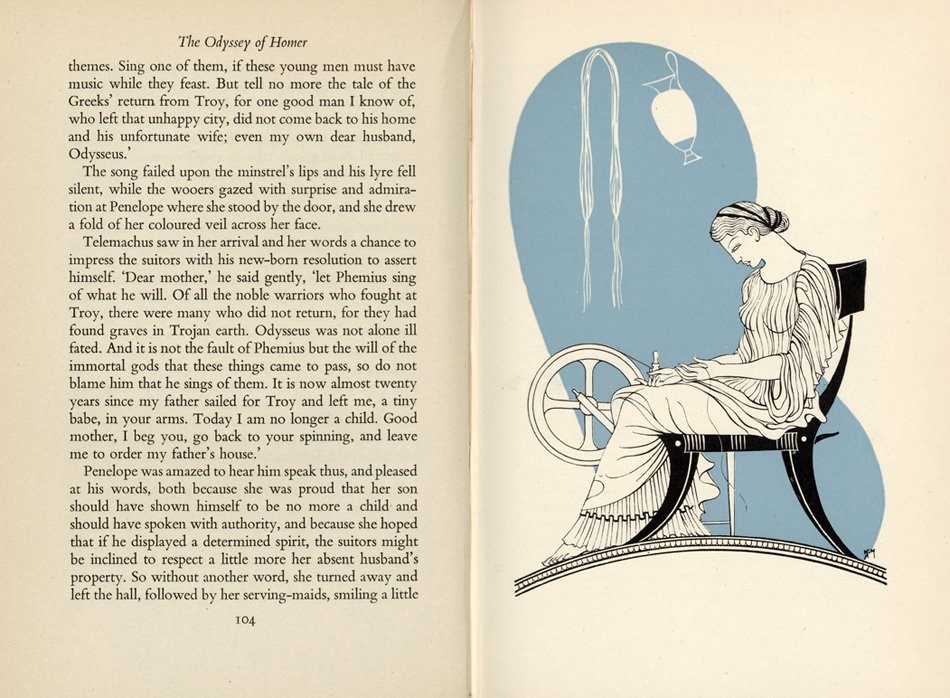 After their ten-year-long war with the men of Troy
was ended and the Trojan city had fallen in flames
and smoke, the victorious Greeks gathered together
their booty and their prisoners

British children's book author Barbara Leonie Picard wrote original fairy, tales, historical fiction and medieval legends that were all meticulously researched. Picard's Odyssey, admired by Robert Graves, has been reprinted in many editions and now forms part of the Oxford Myths and Legends Series, along with her Iliad and her numerous other retellings of ancient mythology. 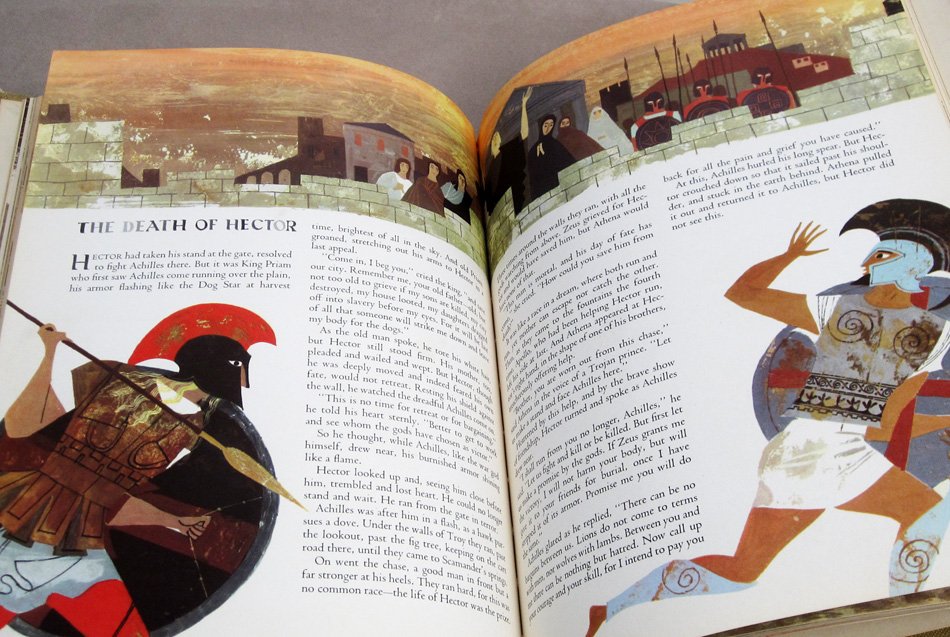 
The Iliad and the Odyssey, the Heroic Story of the Trojan War [and] the Fabulous Adventures of Odysseus
New York: Simon and Schuster, 1956. The Golden Library.
Illustrations by Alice and Martin Provensen.
Historical Children's Book Collection.

This is the story of the Trojan War, and how
upon the plains washed by the Aegean Sea,
the Greeks won Helen back and punished
Troy.

Alice and Martin Provensen collaborated on over forty children's books, including many classic tales, stories by Margaret Wise Brown and other noted children's book authors, and books they both wrote and illustrated. The warm tones and soft textures of the designs in this book characterize many of their works. The Provensens are recognized as among the most distinguished twentieth-century illustrators of children's picture books and many of their works remain in print today. 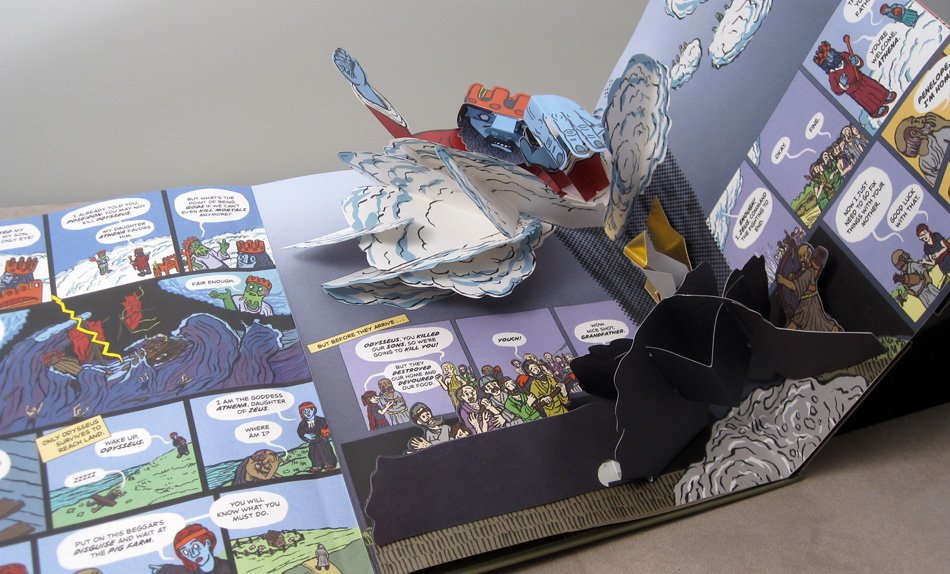 Penelope, Queen of
Ithaca, and her
Suitors listen to songs
Of the Trojan War.

One of the striking spreads in Sam Ita's pop-up Odyssey brings readers inside the Trojan horse, and pull-tabs take out Polyphemus's eye and turn a man into a pig. The dialogue is often humorous: in response to Penelope's question about his long absence, Odysseus remarks, "Well, sweetheart, it's an awfully long story."