Growth and turbulence marked the Beadle years, which were period of intense change for universities across the country. While strident calls were being made for universities to become centers for social and political action, the University of Chicago held steady to its traditional values of research and intellectual excellence, insisting that its role was to advance knowledge.

After the retrenchment of the Kimpton administration, George Wells Beadle presided over an impressive period of growth for the University. The faculty increased in numbers from 860 to 1080, full professors from 345 to 433, average salaries increased 50 percent, and total campus expenditures doubled. A three year development campaign reached its goal of $160 million. New buildings were constructed for high energy physics, astrophysics, the children's hospital, and the School of Social Service Administration; new facilities were planned for geophysics and life sciences. In many ways the Joseph Regenstein Library, built in the middle of the old football field, stood as a symbol of the University's highest goals, serving to assist basic research in many disciplines and to bring their resources under one roof.

Born near Wahoo, Nebraska, Beadle remained first to last a farmer at heart. In college he took up the new field of genetics, which was soon to revolutionize not only plant breeding but the entire understanding of biological reproduction. Along with Edward L. Tatum, he established the relationship between genes and enzymes in the bread mold Neurospora, which would earn him a Nobel prize. While president of the University of Chicago, he grew corn behind his house and in other plots near campus and was occasionally mistaken for a University gardener.

The separation between the sciences and the humanities is a fallacy that is annoying to me. Science is not opposed to culture any more than culture is opposed to science. Intelligent people seek balance.

Trained at the University of Nebraska and Cornell, Beadle taught at Harvard, Stanford, and the California Institute of Technology before being chosen as chancellor of the University of Chicago in 1961. The trustees were excited to bring in a scientist with broad-minded views who could establish links with the humanistic disciplines. They felt that the University needed someone who could capitalize on the government's interest in funding "big science," while maintaining its commitment to liberal education.

Beadle welcomed government support for higher education and discounted fears of expanding government control: "No longer can a modern nation remain economically strong and free without supporting academic research and education in a big way .... it is clear that in more and more ways and to a greater and greater extent faculty salaries will come from government funds." The University would continue to seek private support to sustain its independence, but increasing government participation was both necessary and inevitable. Funding came from many agencies for different purposes: "The government is not a monolithic giant capable of acting in unison in all its parts," Beadle said, and he felt this would protect the University from undue control.

With urban renewal well underway in the Hyde Park neighborhood, Beadle faced the backlash from those who were unhappy with the changes it brought, both those who disliked the University's plans and those who felt it had not done enough. Tensions mounted as student members of the Congress of Racial Equality charged that University policies abetted racial segregation in University-owned housing. Saul Alinsky, who had studied at the University, helped to organize black residents of Woodlawn who objected to the University's plans for development in their neighborhood.

Beadle took charge of efforts to rehabilitate and beautify the campus and ordered the reseeding of all the lawns on the quadrangles, quipping that the University was "horticulturally deprived." Muriel Beadle spearheaded efforts to find new homes for neighborhood artists and small shop owners who had been displaced by demolition, resulting in the construction of the Harper Court complex.

Further storms of protest overtook the campus as the Vietnam War escalated. In 1966 and again in 1967, students staged sit-ins at the administration building to oppose University compliance with government regulations requiring reports on the academic rankings of male students for draft purposes.

Chairman of the Board Fairfax M. Cone announced in June 1967 that Beadle would retire the next year on his 65th birthday. Chosen as his successor was Beadle's close associate Edward H. Levi, who as provost had directed efforts to improve the faculty and reorganize the College program. Beadle accepted the directorship of the Institute for Biomedical Research of the American Medical Association and moved it to campus, where he remained to teach and continue experiments with corn for some years. In the yard of his home near 55th and Dorchester, he planted flowers in the front, and in the back "teosinte," which he claimed was a wild parent of domesticated corn. He and Muriel moved to a retirement village in Pomona, California, in 1982. 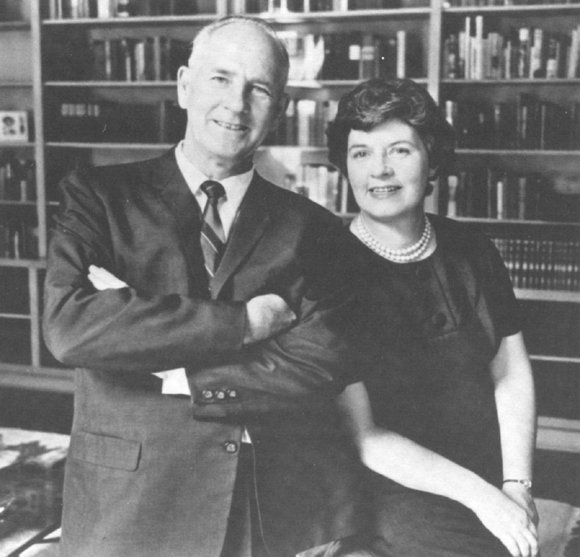 George and Muriel Beadle co-authored their  book, The Language of Life: An Introduction to the Science of Genetics, 1966.