Charles Otis Whitman Comes to the University of Chicago

William Rainey Harper and Charles Otis Whitman shared the common vision of making the University of Chicago a truly great university. Harper, born in Ohio in 1856, received his doctorate in Old Testament studies from Yale University in 1875 at the age of 18, and was appointed President of the newly opened university in 1891.  Whitman, born in Maine in 1842, came to the University of Chicago in 1892 after establishing himself in a broad-based career at a number of institutions.  He graduated from Bowdoin College in 1868, taught at and administered high schools in Maine and Massachusetts, interned at Louis Agassiz's school for natural history on Penikese Island, and in 1878 completed a Ph.D. in parasitology at the University of Leipzig. By 1892, when he assumed the position of Professor of Zoology at the University of Chicago, he had worked at Harvard, held a full appointment at the Imperial University of Tokyo and at a freshwater research station near Milwaukee. He had conducted research at Johns Hopkins University, and served as a full professor on the faculty of Clark University in Massachusetts.  Also in Massachusetts, in 1887 he founded and became the editor of the Journal of Morphology and in 1888 established and became the director of the Marine Biological Laboratory at Woods Hole.

In addition to Whitman, President Harper appointed Thomas Chrowder Chamberlin, then president of the University of Wisconsin, professor of geology. John Merle Coulter, president of Indiana University, became chairman of botany and supervised the dissertation of Henry Chandler Cowles whose research in the Indiana Dunes established the science of ecology in America. George Ellery Hale was appointed associate professor of astronomy and became the director of Yerkes Observatory in Williams Bay, Wisconsin. Jacques Loeb, physiologist and embryologist at Clark University, was appointed in 1892. Albert A Michelson also came from Clark University, became chairman of physics, and received a Nobel Prize in 1907 for his discovery of the speed of light.

These appointees exemplified Harper's vision of a truly great university. They arrived at the University with the expectation that it would allow them freedom to achieve distinction in their chosen fields. All did.

Initially an embryologist, after coming to Chicago Whitman began devoting more and more of his time to pigeon development, heredity and behavior. He raised more than thirty species of pigeons in cotes around his home on South Woodlawn Avenue just a few blocks from campus. Each summer, when traveling to Woods Hole, he carefully packed the pigeons into New York Central Railroad boxcars for shipment, returning with his pigeons in September. After several years the University ceased paying the cost of shipping his birds, and Whitman and his wife picked up the bill.

Whitman was convinced that orthogenesis  evolutionary change occurring independently of environmental influence — offered the best explanation for patterns of inheritance.   His commitment to orthogenesis began before Darwin's view on evolution became widely accepted and when the work of Hugo deVries on genetic mutation was largely unknown.

Whitman initiated the practice of inviting distinguished guest speakers to address students and staff at MBL, a practice that continues today. On occasion, Whitman spoke himself. In 1898, he astonished his audience by stating that, "Instinct and structure are to be studied from the common standpoint of phyletic descent." This revolutionary statement set the tone for animal behavior study conducted throughout the world. Whitman maintained directorship of the MBL until 1908 when it was turned over to Frank Rattray Lillie, also of the University of Chicago.

The original biology laboratories were in the basement of a nearby apartment building. After Whitman lobbied Harper for new laboratory space, a gift of more than $1 million from Mrs. Helen Culver enabled the construction of the biology complex of Hull Court. 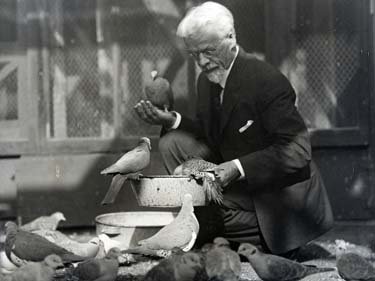 Photo of Charles Otis Whitman with his pigeons