Paul Christian Kirchner first published Jüdisches Ceremoniel in 1717, following his 1709 conversion from Judaism to Christianity. The foreword announced his intention to convince other Jews to follow his example. In 1724, the amateur Hebraist Sebastian Jugendres collaborated on a new edition of Jüdisches Ceremoniel.  Jugendres corrected, refined, and softened Kirchner's language, spelling, grammar, and scornful tone. This new annotated version included a new foreword and a series of copperplate engravings depicting Jewish customs and rituals.

Jüdisches Ceremoniel epitomizes the necessary cooperation between converted Jews and Christian Hebraists. While former Jews possessed first-hand knowledge of Jewish beliefs, customs, and language; the Hebraists often had a more extensive education. And, as with other early works on Judaism, the images in Jüdisches Ceremoniel have substantial documentary value, even when the text is critical of Judaism. 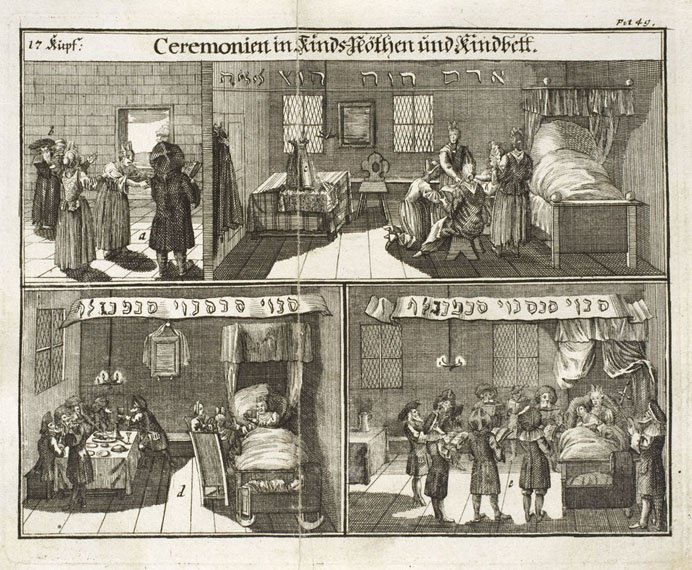 Ceremonien in kinds- nöthen und kindbett (Childbirth),one of the illustrations produced for Sebastian Jugendres' 1724 edition of Kirchner's text, shows a woman in childbirth. In the top panel the woman in labor sits in a birthing chair surrounded by women while the men, including the father-to-be (labeled "a"), wait outside. In the bottom panel the new mother continues to have women in attendance while the men hold a celebratory feast.