Shabbat, or the Sabbath, is a key holiday within the Jewish year. Like all Jewish days, the Sabbath begins and ends at sundown. Every week, from sunset on Friday to sunset on Saturday, all work is set aside in fulfillment of the commandment to rest on the seventh day. Celebrating the Sabbath commences with the lighting of candles and recitation of prayers just before sunset, and continues with family gatherings, prayer, study, and song through the following day.

Because Shabbat was a home- as much as a synagogue-based holiday, each member of the family had a role to play in its celebration. Women and girls would spend Fridays getting the home ready for the Sabbath, cleaning and cooking. By late afternoon, as elaborate a dinner as the family could afford was prepared; and, since no cooking was allowed after sunset, special long-cooking dishes were placed in individual or communal ovens for consumption the following day.  Just before sunset, the woman of the house would light and bless the Sabbath candles. Shabbat dinner, ideally a festive, family moment, would start with the man of the house blessing the wine (kiddush) and the woman saying the blessing over the special bread, the challah. Boys and men devoted Saturday morning to study and prayer; by the afternoon, while some continued to study and pray, others turned to rest and sociability. The family reconvened in the home for the conclusion of the Sabbath. The havdalah ceremony marked the day's closure; a special braided candle, wine, and sweet spices were part of the ritual. As the 1921 print by Jakob Steinhardt shows, the Sabbath, because of its association with joy and plenty, was often used by artists as a vehicle to lend greater poignancy to their depictions of Jewish poverty and misery.

The central place of the Sabbath in Jewish life, the domestic rituals upon which it rested, and the objects used in its celebration (candlesticks, kiddush cup, havdalah candles and spice box) inspired many illustrators and artists across Europe and across the centuries. 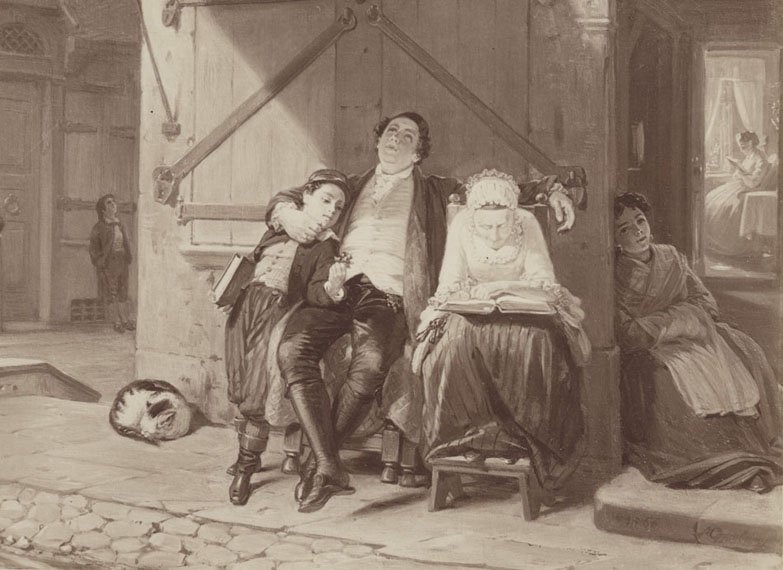 In the Jewish calendar, autumn is a time of intense ritual life.  Rosh Hashanah, the Jewish New Year, the first of the holidays, is joyous but also initiates a ten-day period of intense introspection, repentance, and quest for forgiveness culminating in Yom Kippur, the Day of Atonement. Although Yom Kippur concludes the High Holidays, or Days of Awe, the holiday cycle continues as Yom Kippur is followed by the Sukkot, the Feast of Tabernacles; Shemini Atzeret, the Eighth (Day) of Assembly; and Simchat Torah, (the day of) rejoicing in the Law; in quick succession.

Synagogue worship is central to celebrating the Days of Awe; even Jews who abandon regular Sabbath observance often attend services at this moment of the year. It is not surprising, therefore, that the iconography of these holidays tends to focus on the synagogue and more particularly on the very dramatic blowing of the shofar, or ram's horn. Tashlikh, the symbolic casting away of sins by throwing a piece of bread into a moving body of water, performed on the afternoon of Rosh Hashanah, has also captured the imagination of illustrators. So, too, has the kaporah ceremony, performed between Rosh Hashanah and Yom Kippur, in which a rooster (or money) is offered to the poor. These symbols endured, although their forms changed in the particular context in which Jews found themselves. The body of water used for tashlikh, for example, could be a small rural creek, the Mediterranean, or the Rhine River.

In a classic example of Jewish acculturation, when the practice of sending Christmas and secular New Year's greeting cards became popular in Europe and the United States in the late nineteenth century, Jewish illustrators and publishers started to produce Rosh Hashanah cards and postcards that reflected the styles and tastes of the secular context in which they were produced. Some illustrated the key moments in the Jewish ritual calendar, while others reproduced a well-known painting or engraving of High Holiday synagogue worship, the casting off of sin, or the blowing of the shofar. Yet others use the occasion to emphasize the transmission of Judaism across the generations.

Beginning five days after Yom Kippur and lasting for seven, Sukkot is a harvest festival. In order to commemorate the forty years that the Israelites wandered in the wilderness, practicing Jews construct booths or sukkah outside the synagogue and the house. Sukkot were, ideally, to be constructed of gathered branches and decorated with harvest fruits. The roof, if it had one at all, was to be porous enough to allow the sky to be visible. Traditionally, meals were taken in the sukkah and some people chose to sleep in them as well. European Jews demonstrated extraordinary ingenuity in creating sukkot in urban environments, and artists were equally imaginative in seeking to represent their role in Jewish life.

The other symbols of this holiday are the lulav and etrog.  Lulavim are dried palm branches attached to sprigs of myrtle and willow, while etrogim are citrons, a lemon-like member of the citrus family. In the various depictions of Sukkot, garlands of etrogim can be seen decorating the booths and being used to celebrate the holiday in a London synagogue.

Simchat Torah, the holiday celebrating the conclusion and recommencing of the annual reading cycle of the Torah (the five books of Moses), marks the end of the fall ritual cycle. The synagogue is the locus for the celebration of this holiday, during which the Torah scrolls are held aloft, paraded through the synagogue, and often transformed for the moment into dancing partners. 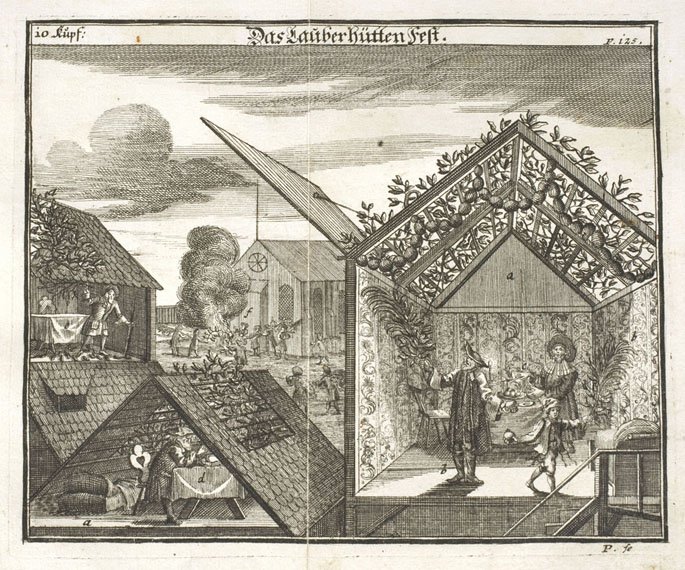