The political upheavals of 1968 were prepared for and accompanied by similar upheavals in artistic practice. Artists identifying with and in some cases participating in worker and student movements turned aggressively against the art establishment and joined in the broader cultural criticism of capitalist consumer society. They sought to use their art to interrogate and contest violence: the explicit violence of war, most pressingly in Vietnam, as well as the more insidious structural violence that pervaded everyday life. Increasingly, they understood their artistic practice itself as inherently political.

Jörg Immendorff’s LIDLSPORT–Ringmatte is a “paper,” published by VICE Versand, that was meant to be laid out in public and wrestled upon. The artistic struggle on the mat actually takes place on the street, so to speak, to inflect everyday struggles that are otherwise obscured. This critique of everyday violence was extended in actions like Günter Brus’ Zerreißprobe (1971), a graphic interrogation of the political and aesthetic anatomy of the human body.

Hans-Peter Feldmann, in contrast, collected images from the newsprint media into books, stripping them of their discursive context to produce jarring visual records of the representation of violence in mass media. The role of the mass media and the interests they represent spawned such critical newspapers and broadsides as those published by art students in Düsseldorf under the parodic titles Information and Illustrierte Akademie Zeitung.

The blurring of the difference between political and artistic action paradigmatic in this period is attested to in Wolf Vostell’s compilation of photographs, manifestos, and performance documents, Aktionen: Happenings und Demonstrationen seit 1965. His action-object, Maszstab: Leben ist Kunst, a wooden ruler “printed” by the Swiss publisher Edition Howeg with a series of politically and institutionally-loaded terms, presents an ironic reflection on the topography and commensurability of art and everyday life in this time of turmoil. 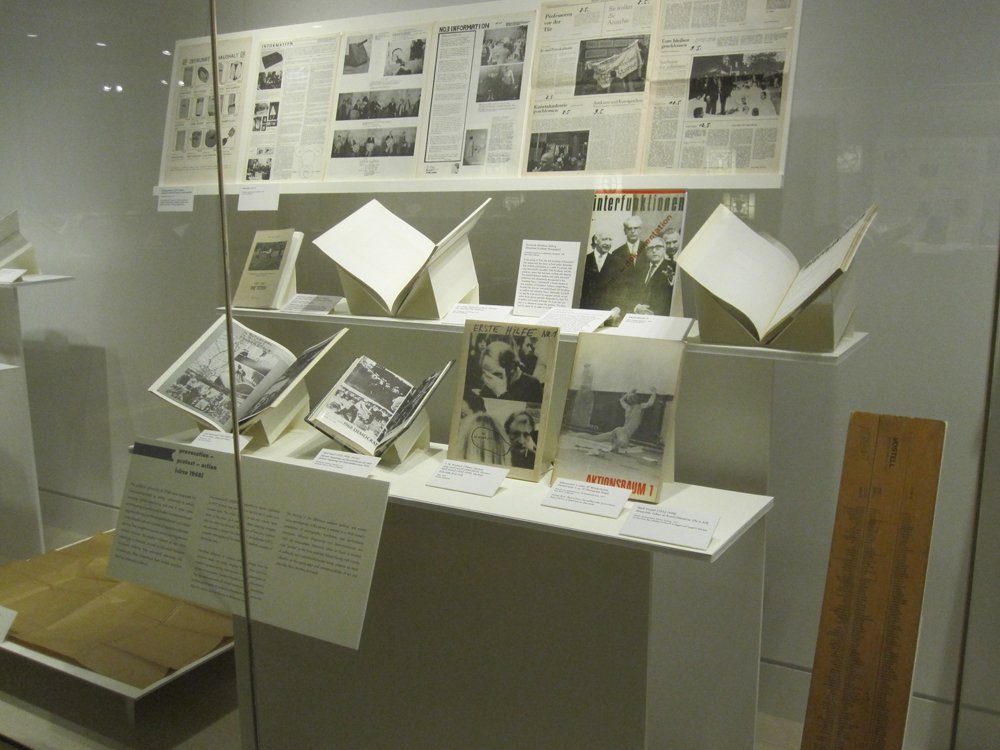 An installation view for the exhibition section Provocation – Protest – Action. 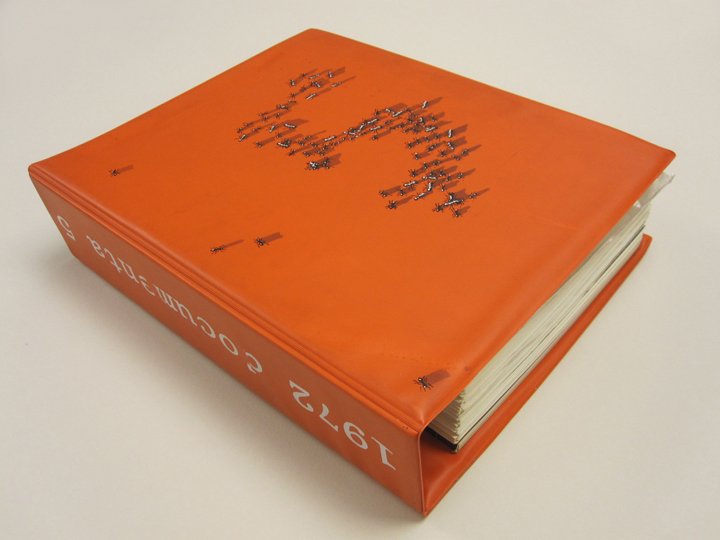 Swiss curator Harald Szeemann, who had curated the path-breaking exhibition Happening & Fluxus (1970) in Cologne, further transformed the very idea and form the art exhibition with his now legendary “questioning of reality” in documenta 5. A far cry from the contested static format of the documenta 4 in 1968, Szeemann conceived of the documenta 5 as a 100-day event. Along with works of performance art, conceptual art, Photorealism, environments, and even artists’ publications, including Die Schastrommel, the show offered numerous occasions for visitors to reflect on the question of constitutes art in the first place. Political propaganda, pornography, advertising, and devotional objects were juxtaposed with works by “artists” throughout the show. In tune with the exhibition, the enormous catalogue, an artist’s book in its own right, abandons standard bound formats, presenting the reader with alphabetical artist entries that the visitor could fill in by opening and closing the binder. This edition has original photographs from the exhibition enclosed, which were possibly taken by the former owner. The iconic cover of the catalogue is designed by the American Pop artist Ed Ruscha, well-known for his own artist’s books, many of which are housed Special Collections.