The low bridges crossing the Chicago River were frequently opened for the passage of masted vessels, cutting off street traffic to the North and West Sides. City officials began discussing tunnels under the river as early as 1844. The 1,605-foot Washington Street tunnel opened January 1, 1869. North Side access was made easier with construction of the LaSalle Street tunnel (1869–71), 2,000 feet long. The tunnels were a valuable escape route during the fire of 1871, which quickly consumed the wooden bridges. These first two tunnels served private vehicles and pedestrians; they carried no horsecar lines. However, in the 1880s the cable car companies took over the two tunnels, because cables could not cross drawbridges, and in 1891–92 built a third street railway tunnel just north of Van Buren Street, 1,514 feet long.
Although the tunnels had been some 18 feet under the riverbed when built, reversal of the Chicago River in 1900 exposed them. They were closed with the end of cable car operation in 1906. Wider, deeper replacements were built underneath the original tunnels and opened to electric streetcar service in 1911–12. To avoid steep grades at either end, the new LaSalle Street tunnel was built in dry dock, of steel plate, and lowered into a trench in the riverbed.
The Van Buren Street tunnel was closed to regular traffic in 1924. The LaSalle Street tunnel closed in 1939 to allow subway construction, and the Washington Street tunnel was closed in 1954.

Beginning in 1938, federal financing from the Public Works Administration facilitated construction on nine miles of rapid transit subways. Route No. 1, under Clybourn Avenue, Division Street, and State Street, and Route No. 2, under Milwaukee Avenue, Lake Street, and Dearborn Street, were unfinished when the U.S. entered World War II. The city was able to finish the State Street Subway by October 1943. The Dearborn Subway opened in February 1951.
Contractors experienced with sewer construction dug the subway through blue clay, about 43 feet below street level. Station mezzanines were constructed by excavating from street level and reconstructing the street on overhead steel supports, a technique known as "cut-and-cover" construction. As had been done earlier with the LaSalle Street streetcar tunnel under the Chicago River, tubes constructed in dry dock were lowered into a trench in the riverbed and connected to the State Street tunnels at both ends.
The Dearborn Subway was extended in 1958 under the new Congress Parkway, and the line to Logan Square was extended in 1970 using cut-and-cover construction under Kimball Avenue to reach the Kennedy Expressway extension. 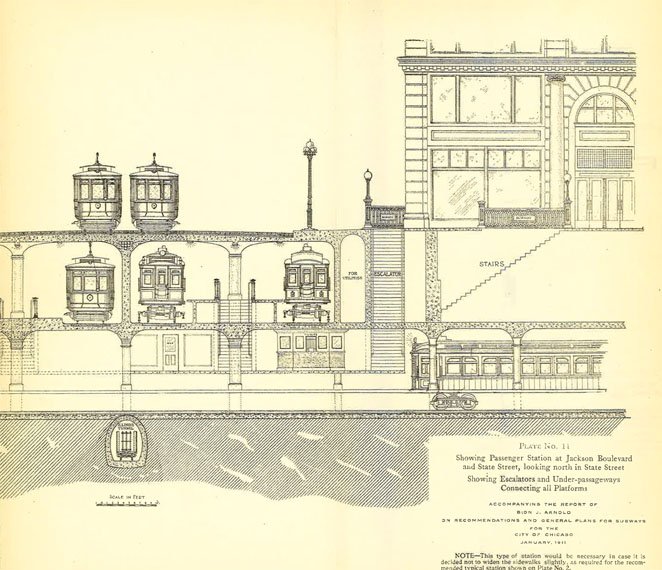 
Recommendations and General Plans for a Comprehensive Passenger Subway System for the City of Chicago, Made and Submitted to Honorable Fred A. Busse, Mayor, and Honorable Milton J. Foreman, Chairman, and the Members of the Committee on Local Transportation of the City Council of the City of Chicago, by Bion J. Arnold, January, 1911. Chicago (Ill.). City Council. Committee on Local Transportation. (1911). Crerar TF847 C4A7