Collections & Exhibits > Exhibits > Building for a Long Future: The University of Chicago and Its Donors, 1889-1930 > Anita McCormick Blaine

Innovations in educational thought matched those being made in science on campus in the early decades of the twentieth century. Educational reformer John Dewey's appointment to the faculty in 1894 signaled a substantial commitment by the University of Chicago to test new teaching practices and to implement new pedagogical theories. Indeed, the creation of the Laboratory School under Dewey's leadership immediately put the University on the national educational map. But to sustain Dewey's high ambitions, University administrators needed the financial resources that only a major philanthropist could provide. Into the breach stepped Anita McCormick Blaine (1866-1954). The daughter of industrialist Cyrus Hall McCormick and his wife Nettie, Blaine made a substantial gift for a building to house the University Elementary School and University High School on campus—Emmons Blaine Hall. Moreover, Blaine also provided funds to subsidize the University's programmatic work in education, a welcome expansion of the horizon of philanthropy beyond that of the first cohort of Chicago donors, whose gifts had been directed largely to building construction.

The cause of improving primary and secondary education deeply interested Anita McCormick Blaine, perhaps a reflection of the minimal education she received as a child. Believing that the existing methods of primary instruction were ineffective, Blaine searched for the right person to be her standard bearer, and she found him in Colonel Francis Wayland Parker. Since the 1870s Parker had experimented with new methods of teaching, rejecting the idea that students learned best by rote memorization. Parker's unconventional opinions (e.g., his rejection of the traditional division of subjects, his emphasis on parental involvement, and his insistence on practical learning) attracted much criticism, but Blaine became an ardent and enthusiastic supporter. In 1899 she urged Parker to establish a unique private school on the city's North Side, in which she could enroll her son Emmons, offering to fund the plan herself.


With Blaine's patronage Parker opened the Chicago Institute in 1900 in a rented German Turngemeinde, or athletic club, on North Wells Street. Plans had been developed for an impressive new building and elaborate curriculum for the Institute, but when expenses skyrocketed Blaine and Parker began to consider alternate possibilities. They found a resolution to their dilemma in a plan worked out by William Rainey Harper to incorporate the school within the University of Chicago as a part of its educational program. Blaine then announced that she would transfer her pledged investment of $700,000 in the Chicago Institute to the University of Chicago. By 1901 Blaine and Parker's enterprise had been merged with Dewey's experimental school, laying the foundations for the University's School of Education and for the modern Laboratory Schools of today. All that remained was for the new entities to receive a worthy and permanent home, which they acquired in 1904 with the completion of Emmons Blaine Hall. At the building's dedication ceremony, Blaine clarified her role in the establishment of the School of Education. "I did not found it," she affirmed. "I simply found it." Ever a political, social, and religious non-conformist, Blaine supported a system of profit-sharing for her family's reaper business, instituted an eight-hour day for her household staff, became interested in spiritualism, and supported leftist politicians. Her endorsement of progressive Henry Wallace for President of the United States in 1948 perplexed even her closest friends and drew harsh criticism from right-wing commentators. But Anita McCormick Blaine went on to become an avid proponent of world government and international accord and remained committed to the cause for the rest of her life. 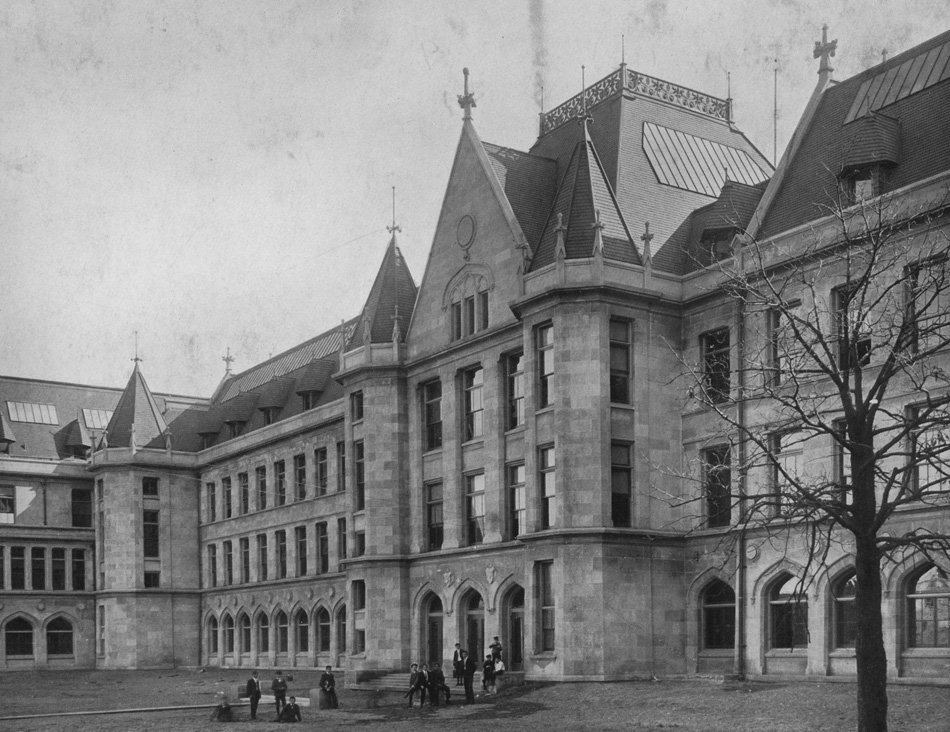