Collections & Exhibits > Exhibits > Building for a Long Future: The University of Chicago and Its Donors, 1889-1930 > Jesse L. and Susan Colver Rosenberger

According to campus folklore, Jesse L. Rosenberger was a generous recluse who walked Chicago's streets with a strange request, written on a small card, tucked inside his coat pocket. The card directed whomever might find Rosenberger's body to fulfill his last request, namely, that the University of Chicago must be notified immediately about his death. This puzzling dictum was all the more ironic in view of the fact that after the death of Rosenberger's wife in 1918, he avoided any personal contact with University officials.

Jesse L. (1860-1939) and Susan Colver Rosenberger (1859-1918) came from very different family backgrounds. A descendant of a long line of Baptist preachers, Susan was born a New England Yankee. Jesse, on the other hand, counted among his ancestors German Mennonites from Pennsylvania; he was so intrigued by his heritage that he published three books with the University of Chicago Press on the Pennsylvania Germans and the Colver and Rosenberger families. Yet the Rosenbergers' early lives did have powerful similarities as well, for each had been born to parents given to constant moves, and each learned to endure incessant displacement as a child. Both were teachers at some point in their lives, and they shared the distinction of attending the first University of Chicago. Although Jesse was forced to finish his education at the University of Rochester when the University of Chicago entered bankruptcy, Susan was able to complete her bachelor's (1882) and master's (1886) degrees at the Old University. Trained as a lawyer at the Chicago College of Law of Lake Forest University, Rosenberger set up a law practice in 1890 and eventually made a substantial fortune by publishing law and business journals.

Jesse and Susan first became acquainted through the professional association of their fathers, but their relationship blossomed on the University campus. The couple wed in 1912, but their marital bliss was short-lived. Susan began suffering from periodic nervous exhaustion and rheumatism soon after their wedding, forcing Jesse to close his law and publishing offices so they could travel to more congenial climates in an effort to improve her health. In 1918 the Rosenbergers returned to Chicago, only to learn that Susan had developed a brain tumor. She died on November 19, 1918, from complications associated with surgery.

Loyal alumnae of the Old University, the Rosenbergers were no less staunch champions of its successor. Over the course of 23 years, they gave $55,000 to the University, beginning with the transfer in 1915 of an old homestead owned by Susan's grandfather, Nathaniel Colver. The sale of this property created the Nathaniel Colver Lectureship and Publication Fund. Two months later, the couple gave an additional gift to establish the Colver-Rosenberger Lecture Fund, and continued to make substantial gifts for fellowships, scholarships, and other forms of student aid over the next several years. In 1917 they made a gift of $3,000 to fund a University-wide prize, the Rosenberger Medal. Created to honor outstanding scholarly and artistic efforts, the Medal constitutes one of the highest honors the University can bestow.

Over the years the University has awarded the Rosenberger Medal to such distinguished individuals as author Toni Morrison, conductors Sir Georg Solti and Pierre Boulez, and Frederick Grant Banting, the discoverer of insulin.

Jesse Rosenberger continued to give generously to the University in memory of his late wife. As late as 1938, just a year before his death, he gave thousands of dollars to endow two permanent funds known as the Susan Colver Rosenberger Aid Fund and the Susan Colver Rosenberger Educational Prize. The Aid Fund financed gifts or loans to students — especially women — who were preparing to teach or enter the field of social work, while the Prize funded awards for superior dissertation research in education. 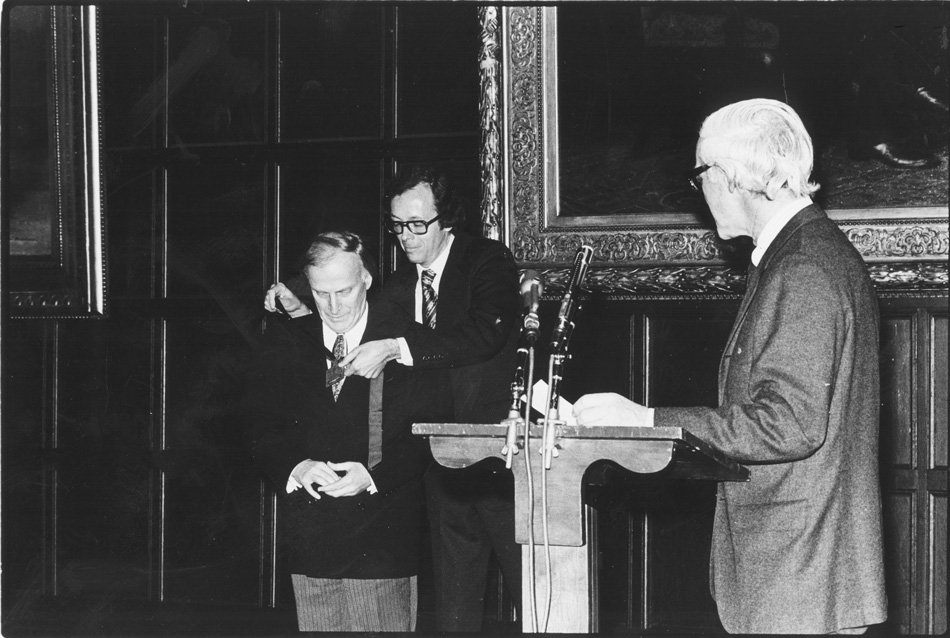