Collections & Exhibits > Exhibits > Building for a Long Future: The University of Chicago and Its Donors, 1889-1930 > George C. Walker

In the late 1880s, the first University of Chicago had hardly gone into bankruptcy when advocates of a new university, led by Thomas Goodspeed, began scouting for land in the Chicago area on which to build their campus. A location within the city itself was an obvious choice, but an offer of property in the suburb of Morgan Park from real estate developer George C. Walker (1835-1905) complicated their decision. A onetime trustee of the Old University, Walker offered the Baptists a thirty-acre site near the Baptist Union Theological Seminary at 111th Street and Hoyne Avenue, along with a building that was already standing on the property and twenty-five thousand dollars. Walker, as the developer, naturally expected to gain from the agreement, since the University's construction would likely attract more residents and businesses to Morgan Park. As it turned out, his proposal was declined in favor of a site donated by Marshall Field on Chicago's South Side in the newly annexed township of Hyde Park; but Walker's continued enthusiasm for the new institution earned him appointment as a member of the first Board of Trustees, positioning him to become one of the University's major early donors.

Walker's relationship to the second University of Chicago grew out of a longer family tradition of support for denominational education. Beginning with his father Charles, who garnered influence as a noteworthy businessman and two-time president of the Chicago Board of Trade, Walker and his family readily answered the call to help establish a Baptist college—the first University of Chicago—in the city. His father was even tapped as a Trustee and served as Vice President of the Old University's Board until his death in 1869. George then agreed to take his father's empty seat, despite the fact that he found the rationale for denominational education less persuasive than had his father. As a young man George Walker was educated at institutions with strong religious values—Chicago's Temple Academy, Beloit College, and Brown University—but a dispute with a congregational disciplinary committee in Chicago over dancing caused him to sever his ties with the city's Baptist establishment. Neither Goodspeed or Harper seem to have viewed Walker's break with his religious roots as a liability, however, and once elected to the Board of Trustees in 1890, he remained an active and thoughtful member until his death in 1905.

In fact, Walker flourished as a Trustee and worked extremely hard for the University. He used family connections to help secure Silas Cobb's pledge in 1892 to fund construction of the University's first classroom building (Cobb was the father-in-law of Walker's brother William), and he also convinced his good friend and fellow businessman Sidney Kent to give $235,000 to construct a new chemistry building. He then demonstrated his own support in June 1892 by promising $130,000 to finance the building of a geology museum and laboratory on campus. Completed in 1893, the Walker Museum was a source of anxiety for the Trustee-donor soon after its opening. Due to a lack of classroom and office space elsewhere on campus, several other academic departments had been moved into the building. As Walker saw it, having departments take up space in the museum interfered with the building's original mission, which was to advance knowledge of the geological sciences. "The housing of in other departments has crowded out the original intention of a building," he complained to his fellow Trustees in 1902. He implored his colleagues to return the museum to its rightful purpose by making "suitable appropriations" in the budget "so that now the work can go forward as originally planned, and so that I can see more of the good results in my lifetime." After several years of strenuous lobbying, he eventually persuaded President Harper to restore Walker Museum to its intended scientific function. 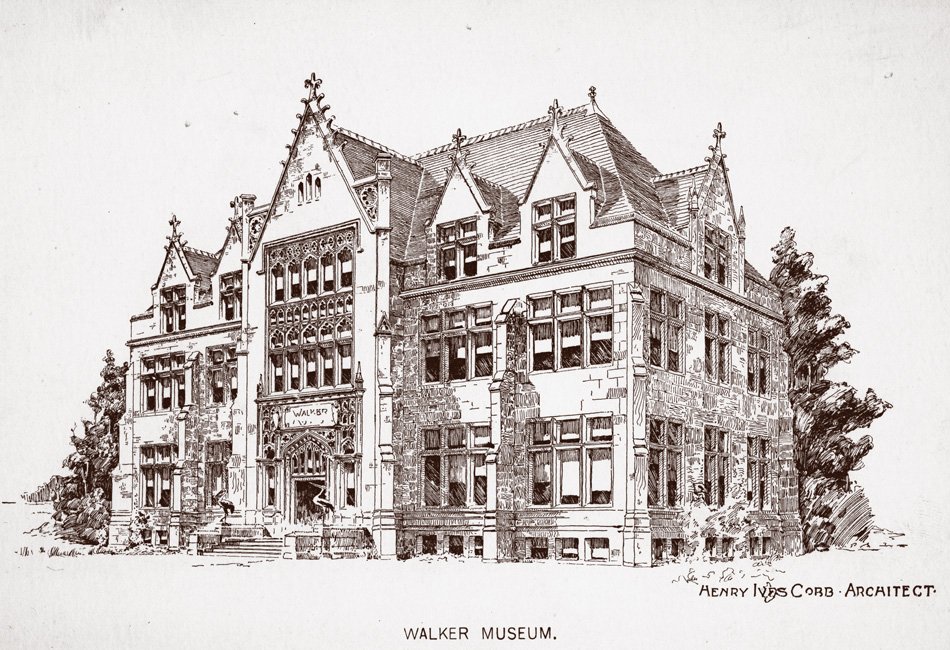