Tomb markers and other relics from the early Roman empire period found in Trier, Germany (ancient Roman city of Augusta Treverorum) and Metz, France (ancient Mediomatrici) seem to indicate that there was a guild of beer makers (ars cervesaria) in northern Europe during the late first century AD. In the figure shown here, the letters CERVESA can be seen on the fourth surviving line of the stone's inscription. 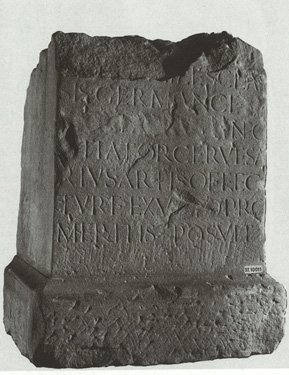 The tombstone of a beer dealer from Trier, Germany, from the late first century AD