A special place in the history of the Soviet children’s book belongs to a loose grouping of Leningrad writers who are best known by their erstwhile moniker “Oberiu,” which roughly signified The Association for Real Art. Oberiu included Daniil Kharms (pseudonym of Daniil Iuvachev, 1905-1942), Aleksandr Vvedenskii (1904-1941), and Leonid Lipavskii (1904-1941), who published children’s books under the pseudonym L. Savel’ev. In spite of increasingly tight ideological control and state repression, these young writers pursued daring experiments in poetic and dramatic form that often bordered on absurdism and ultimately proved fatal. In their short lifetimes they were known mostly for their works for children, in part thanks to the patronage of Samuil Marshak at the journals Chizh (1930-1941) and Ezh (1928-1935) and at the Leningrad arm of the publishing house for children. It was mainly for this work that several of the Oberiutes were imprisoned in 1931-1932; both Kharms and Vvedenskii died in captivity after being re-arrested in 1941. Though sometimes regarded as a mere exigency, the Oberiutes’ writings for children were a logical extension of their efforts to carve out places for the free play of imagination within the menagerie of officially sanctioned images.

Aleksandr Vvedenskii was the most technically accomplished poet among the Oberiutes, and his writing is most thematically consistent with the Soviet imaginary. However, all of his writing is infused with an acute sensitivity to the (often tragic) absurdity of the modern world. The 1929 Avdei Rotozei (Avdei the Mouth-Gaper) tells of a peasant so absent-minded he loses the sacks of grain he is taking to the windmill. The first sack is lost when Avdei gawks at an airplane, apparently the first he’s ever seen. This places the story in the Soviet imaginary, but, unusually, Avdei is never chastised and the moral of the story is not spelled out explicitly. Under interrogation by the secret police on December 26, 1931, Vvedenskii admitted that Avdei-Rotozei committed the grave ideological error of praising rich peasants and portraying the poor as “lazybones and drunkards.” “This image of the Soviet poor was borrowed by me from the anti-Soviet views of the Party’s policies in the countryside, views which were held by our group on the whole." [1]

In Zima krugom (Winter All Around) Vvedenskii contrasts two kinds of children in the winter. The first are relatively idle:

We walked along the sidewalk
And we sat down in the park;
Only our ears turned blue,
Only our eyebrows turned grey.

The latter are so active they generate their own heat:

The illustrations to the third edition of 1935 demonstrate a move away from the abstraction of the 1931 edition, which made the Young Pioneers seem like extraterrestrials. Not only are the illustrations more detailed and sentimental; here the Young Pioneers are sensibly dressed and absorbed in their activities. In an indication of the book’s popularity, the third edition was given a print run of 100,000 copies, at the upper extreme of typical print runs at the time.

In Daniil Kharms’ Igra (Play) three children run around their town imagining themselves as modern forms of transportation: Pet’ka is an automobile, Vas’ka is a postal steamer, and Mishka is a Soviet airplane. There is nothing un-Soviet about this game, but it is conducted with an anarchic spirit that marks all of Kharms’s work. Like much of the Oberiutes’ poems, it has a profoundly open ending. (Kharms frequently finished his poems with the declaration “That’s all.”) Consternation with Kharms’s “non-pedagogical” poetics extended beyond Soviet borders; writing from Paris, the émigré critic Georgii Adamovich also lamented that “not only will children not learn logic [from Kharms’s books], but adults will unlearn it.”[2]

Kharms’s poem “Million” was featured (alongside Vvedensky’s “Friends and Enemies of the Pioneer Jamboree” and works by Mayakovsky and Marshak) in a 1930 anthology Pesnia-molniia (Lightning-Song). Kharms turns his count of a mass demonstration of children into a bewitching number-rhyme:

Under interrogation by the secret police, on New Year's Day 1932 Kharms admitted that “Million” was “anti-Soviet” because “I consciously turned this book on the topic of the Young Pioneer movement into a simple counting game." [3] The anarchic spirit of Kharms’s children’s writings was perceived to be no less subversive than his more radical experiments in his “serious” poetry.

Nikolai Oleinikov (1898-1937) was a children’s poet who was close to the Oberiutes. Many of his children’s books celebrate revolutionary motifs. For instance, Udivitel’nyi prazdnik (An Amazing Festival) tells the story of the international May Day holiday, which before Russia moved from the Julian to the Gregorian Calendar in 1918 fell on 18 April. “The Bolsheviks,” Oleinikov writes, “fixed the calendar,” and the holiday could now be celebrated not in hiding, but on Red Square. A member of the Communist Party, Oleinikov was executed for his literary crimes in the dark year 1937.

The spirit of Oberiu infected other writers of works for children. Stop! by Evgenii Shvarts (1896-1958), a prolific author and dramatist, teaches children how to behave safely on the street: “Up to the middle of the street look left; after the middle – look right,” one page instructs. But how is one to understand the caption on the facing page: “Everyone, everyone, everyone, stop riding the sausage!” Unable to keep up with Shvarts’s imagination, illustrator Konstantin Ivanovich Rudakov made no effort to represent this instruction pictorially. 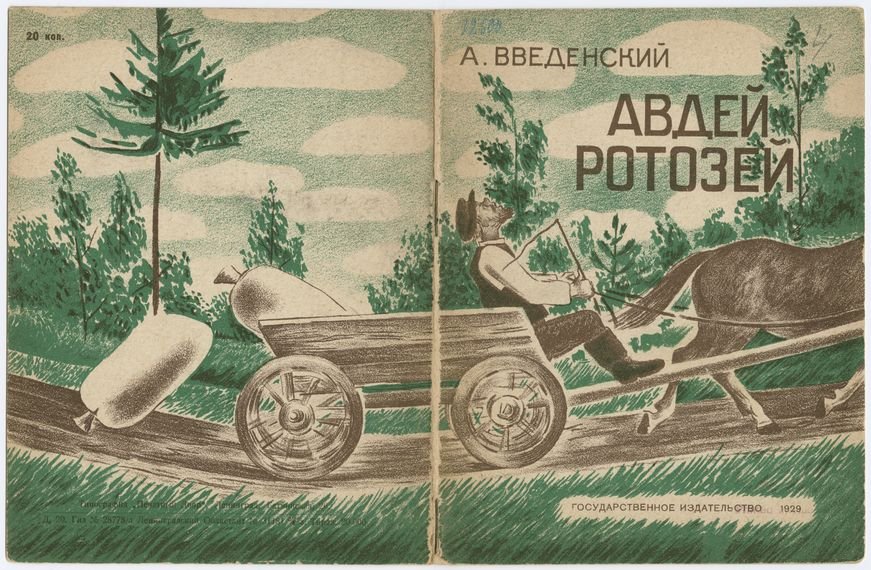 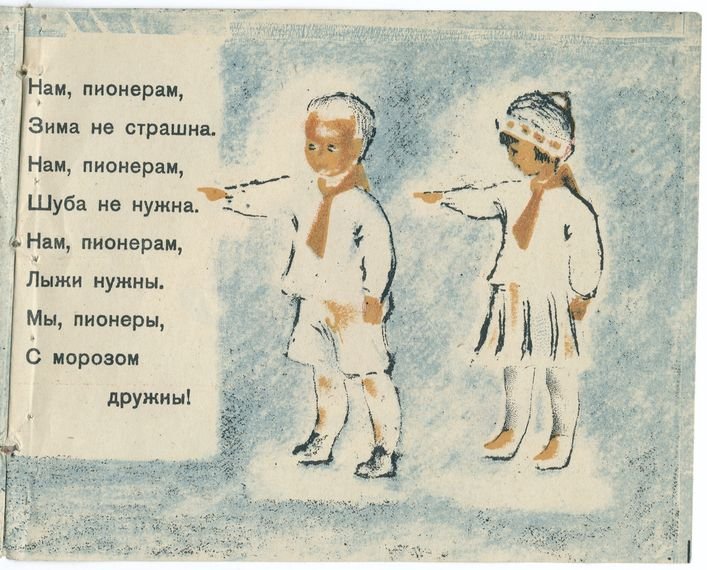 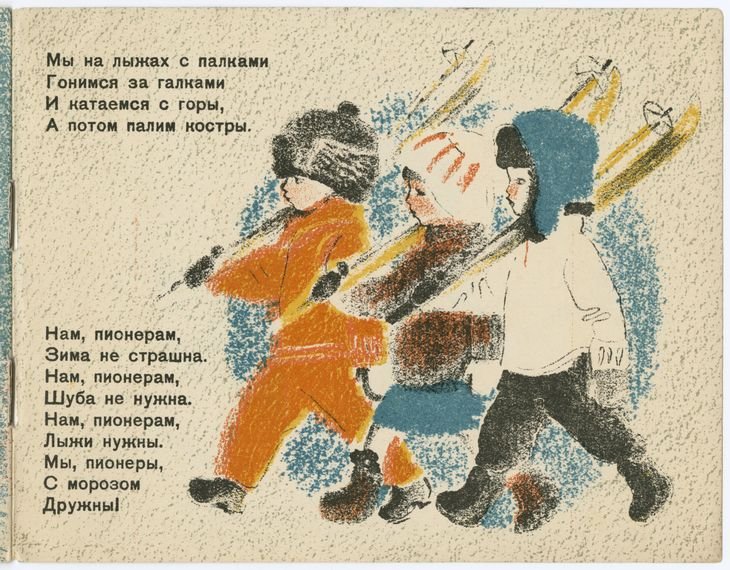 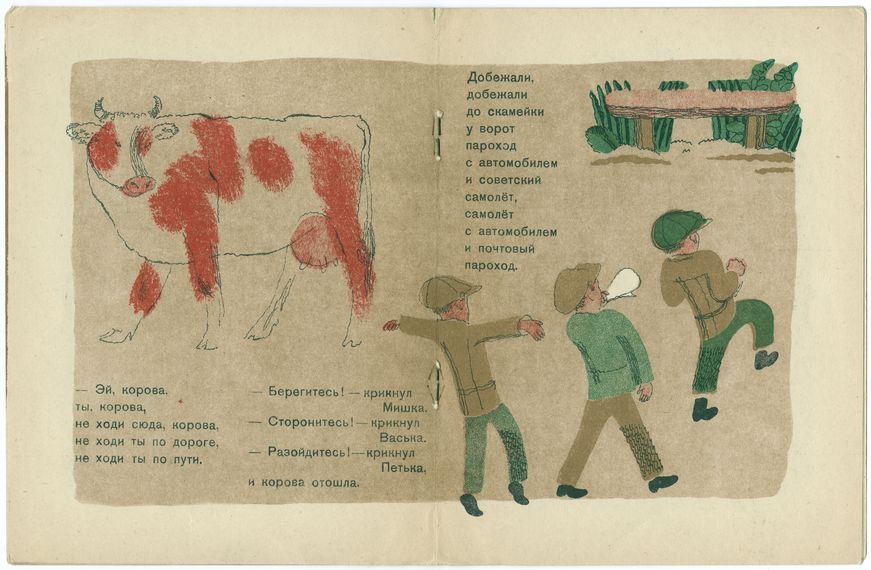 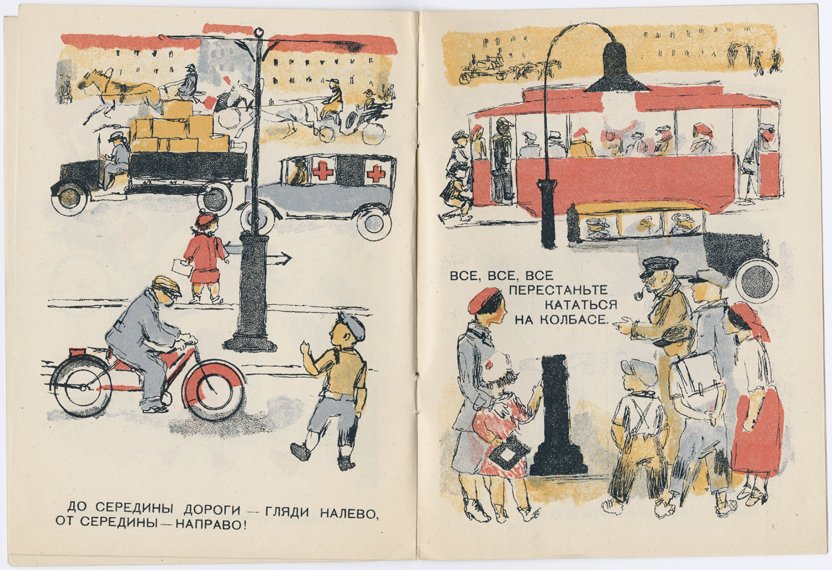