The theme of military preparedness was typically manifested in one of three ways: in depictions of the history and implied lessons of the Russian Civil War; in models of pre-military training and war games; or by showcasing the Soviet Union’s current military might, sometimes in conjunction with children’s own direct participation, and usually with an emphasis on the continued need for vigilance and preparedness for future wars. In these different ways, the books were intended to foster in their young readers soldierly values, a love of things military, and a patriotism born of the need to defend the Soviet fatherland from capitalist and fascist aggression. To be sure, these books dealt with violent themes, but they did so in a way that made war fun.

The Civil War (1918-1921) that followed the Bolshevik seizure of power in October 1917 in Petrograd had pitted the Bolsheviks (“Reds”) against a kaleidoscopic array of opponents: the “Whites,” headed by former Tsarist army officers; the “Greens,” peasant and Cossack bands that fought both Reds and Whites; and foreign “interventionists” seeking variously to suppress Bolshevism, to keep Russia fighting Germany in World War I, or to make territorial gains at the expense of the collapsed empire (these included Britain, France, Italy, Greece, Romania, Poland, the United States, and Japan). Along with the October coup, victory in the Civil War provided the foundational mythology of the Soviet state.

Too young to have experienced or remembered the Civil War, the first generations of Soviet children became the beneficiaries of its mythology. The war offered a wealth of material to explore and to imagine; its color-coded combatants lent themselves especially well to the genre of children’s literature. Grazhdanskaia Voina (The Civil War) depicts the embattled Soviet republic as a red blot, neatly surrounded by the encroaching anti-Bolshevik forces; the text lists “our major enemies” in the East, West, South, and North. As this book was printed, the Soviet Union was embarking on a momentous campaign of forced-paced industrialization and collectivization, accompanied by a ratcheted-up rhetoric about capitalist encirclement and the possibility of a renewed foreign intervention. This ostensibly historical illustration thus served to prime its young readers (or preliterate viewers) to contemporary threats facing their motherland.

Konnaia Budennogo (Budyonny’s Cavalry), a book about the legendary first Soviet cavalry, depicts three of the Bolsheviks’ Civil War opponents (the White Baron Wrangel’, the Ukrainian anarchist leader Nestor Makhno, and the Polish marshal Josef Pilsudski) with the accompanying rhyme by the avant-garde poet A. I. Vvedenskii: “Here before you / Is that famous trinity / That tried to impede / Our work and tranquility.”[1]  By casting the Bolsheviks’ opponents as an unholy trinity, the metaphor joined the Civil War to the contemporary antireligious campaign, while deploying the discredited religious imagery to make the old enemies appear even more distasteful. The choice of Josef Pilsudski was hardly incidental as well; now head of the Polish state, the aging marshal was seen as the spearhead of the western capitalist-imperialist menace. Like other books about the Civil War, Budyonny’s Cavalry offered a ready cast of heroes and villains; the latter were usually vanquished, but as the sequel demanded, they were seldom destroyed.

While some books helped their young readers to identify with the young Soviet state’s struggle for survival in a heroic past, others offered models and advice for applying their youthful energies in the present, in preparation for the future. Veselaia estafeta  (The Jolly Relay) illustrates how one can organize a team obstacle-course race for the youngest children [the “Little Octoberites” (Oktiabriata), the Soviet organization for seven- to nine-year-old schoolchildren].  While not explicitly martial (although the activities include shooting arrows at strung-up bottles accompanied by the militant slogan, “Down with drunkenness and absenteeism!”), the relay would prepare the Little Octoberites for greater challenges ahead. A similarly-organized book targeting older children, Kross: Beg s prepiatstviami (Cross: Race with Obstacles), while broadly educational, featured some unequivocally military themes and slogans. The banner above the shooting range exhorts, “The Red Army Needs Good Marksmen!”

In their inescapable projection of forward movement and speed, these books resonated with another dominant theme of the First Five-Year Plan. Bud’ gotov k oborone. Voennaia igra v ochage (Be Ready for Defense: War Game at Camp) offered younger children an alluring model of toy warfare, complete with deceptively simple instructions for constructing a castle, cannon, horses, and tents out of cardboard and plywood, and laced with a political message: a swastika flutters over the enemy fortress, also decorated with the flags of enemy nations (Poland, Finland, France, Romania, Latvia, and the United States). While the dearth of basic construction materials probably prevented such elaborate exercises from taking place very often, such books helped nourish children’s martial imagination and whet their appetites for the real thing.

In other books children observe, mimic, or even participate in the everyday life of the Soviet military. P. Novikov’s Voenno-lyzhnyi pokhod (The Military Ski Trip, 1931, not pictured) echoes the theme and layout of both The Jolly Relay and Novikov’s own later Cross. It presents military training in harsh winter conditions as fun, despite the soldiers’ freezing red faces and gloveless red hands (probably meant to match the ubiquitous red flags, but unintentionally accurate nonetheless). Nearby, a child on skis next to a snowman watches in awe from behind a wooden fence as the soldiers ski down the hill; further along the route, the children stand closer, one of them pointing out where the soldiers are going; and finally, they are skiing, improbably, alongside the soldiers; one boy drags his sled next to the smokescreen. Na kreisere (On the Cruiser), although labeled “for the preschool age group,” depicts a troop of red-scarved Pionery (Young Pioneers, the Soviet organization for children aged ten to sixteen) visiting a cruiser. Rather than idly standing around, they soon take to helping the sailors scrub the deck. One lucky boy even gets to sit atop the imposing gun barrel while polishing it. Whether or not pioneer troops were actually invited onto Soviet cruisers, such illustrations invited children to revel in their country’s military might and to envision their own contributions.

As the decade of the 1930s wore on, the escalating perception of a menacing capitalist-imperialist-fascist encirclement (encouraged by domestic Soviet political developments, but also by the genuine rise of militarist polities abroad) found continued expression in Soviet children’s literature. Although offering a fanciful account of the armed conflict between Soviet and Chinese forces over the Chinese Far Eastern Railway in 1929, Osobaia Dal’nevostochnaia (The Special Far-Eastern, 1932, not pictured) was printed at a time of renewed tensions in the Asia following Japan’s occupation of Manchuria. By the time Oborona (Defense) appeared in 1937, with poetry by Sergei Mikhalkov (the future author of the Soviet national anthem) and a print run of 100,300 (previous books had typically enjoyed substantial but smaller print runs of 50,000), the Soviet Union had positioned itself internationally as the leader of an anti-fascist popular front, and hundreds of Soviet military advisers, personnel, tanks, and planes were fighting (albeit secretively) on the side of the Republican government in the Spanish Civil War.  Accordingly, the lyrics accompanying the picture of the planes read: “The planes will depart from the hangar / In flying formation aloft / And our best pilots / To bomb the fascists will fly.”[2]  Meanwhile, a murderous terror against “enemies of the people” (perceived opponents of the regime) had been unleashed inside the country, accompanied by a ubiquitous spy mania. This atmosphere engendered the development of a veritable cult of the Soviet border guard, who was usually accompanied by a trusty German shepherd, keeping vigilant watch on the frontier, as depicted on the first page of Defense. This spy mania created opportunities for children to distinguish themselves in the defense of the motherland, and the Soviet children’s press regularly carried reports of children who had helped unmask and detain a spy at the border. Yet even as Defense (and other books, such as Vladimir Aleksandrovich Tambi’s distinctive Voennye korabli (Warships) and Tanki (Tanks) celebrated the captivating technological wonders of the modern military, its front and back covers portrayed a cavalry charge that hearkened back to the martial romance of the Civil War. 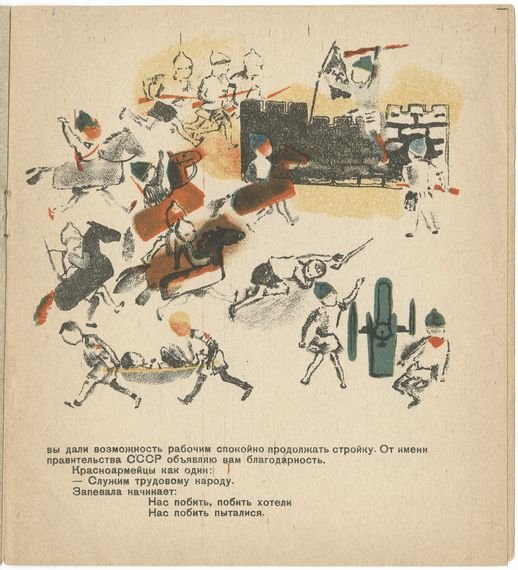 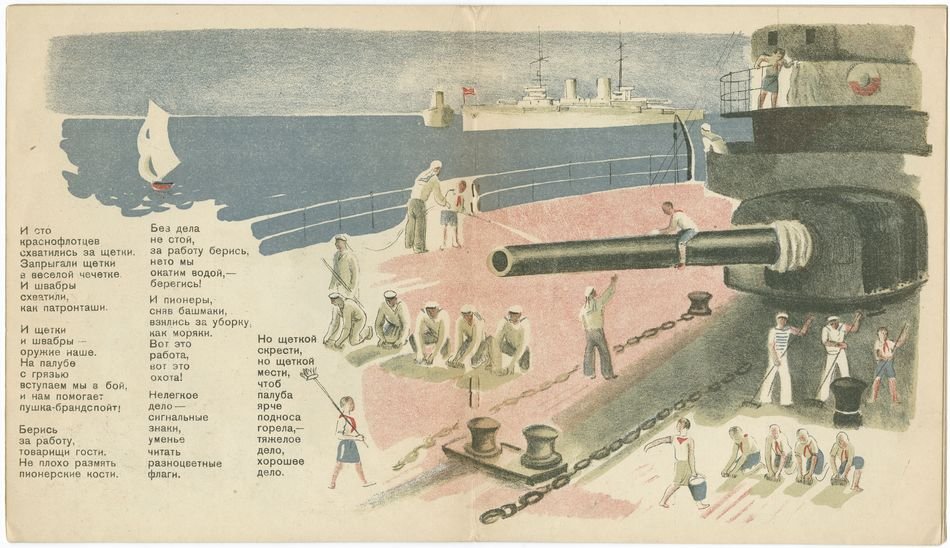 Na kreisere (On the Cruiser) 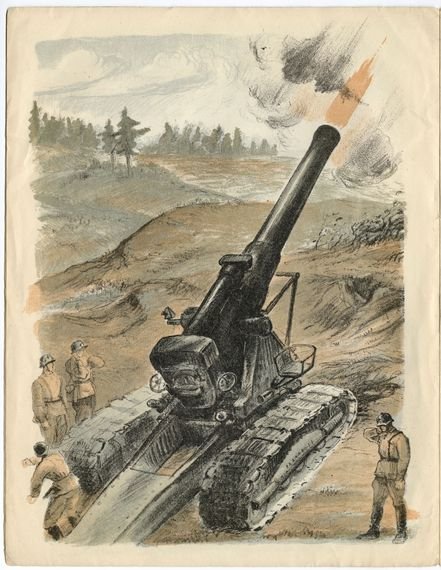 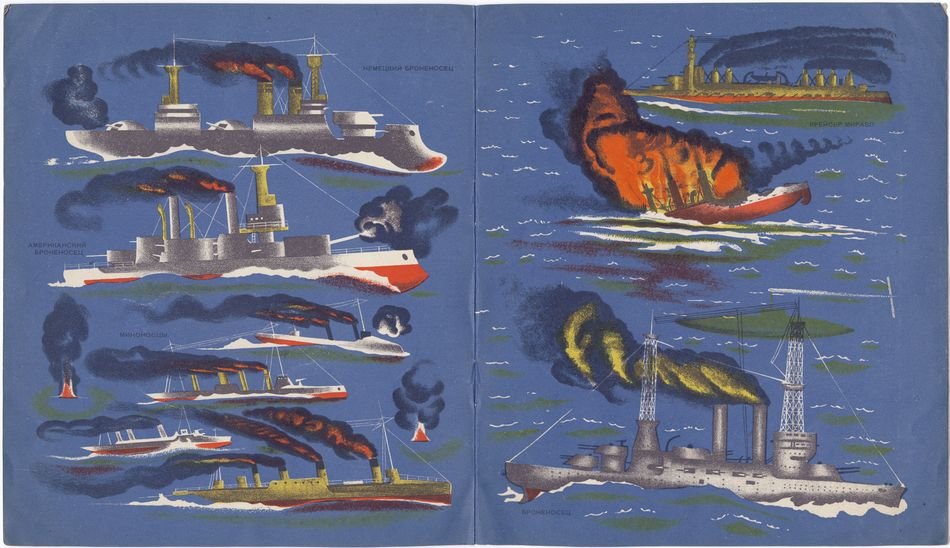 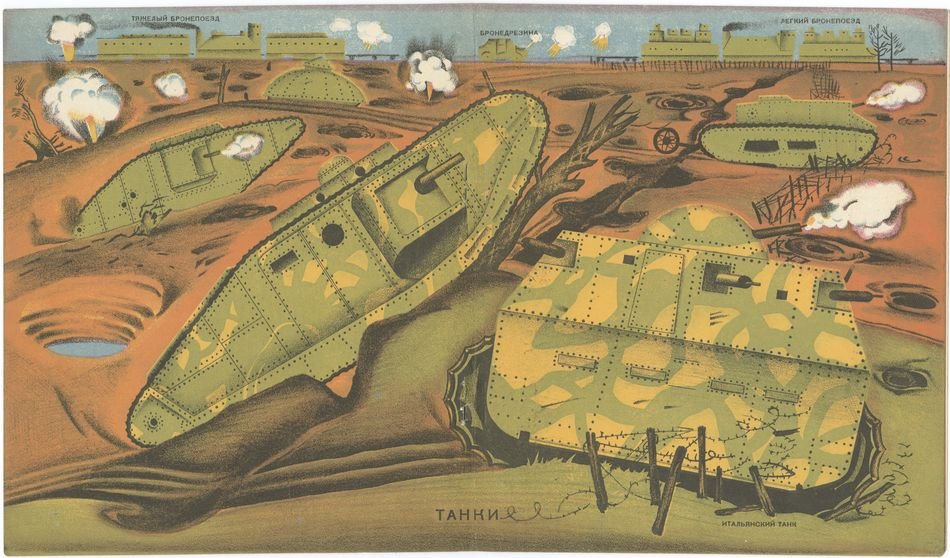