Modern transcriptions of early modern titles misrepresent them. Indeed, the standardization of spelling and typography, along with the omission of major portions of a long title (indicated by an ellipsis), makes it harder for readers today to see that titles were a crucial dimension of the early book. Titles often guided readers by laying out the content and parts of the book, and by indicating the book's value for a particular audience, field of knowledge or market sector. For reasons of space, this exhibition, too, uses abbreviated titles. Even in this section, where we have attempted to be more literal in recording the title of Robert Burton's encyclopedic treatise on melancholy (Item 1), we do not approach the visual intricacy of the original title, since we have reproduced neither the engraved letter forms nor the placement of the title on the illustrated page. A further obstacle to clearly representing a title is that features of early modern books like spelling were not always consistent across multiple editions or even within a single edition. Comparing the printed half-title of this edition to its engraved full title, should we call the book an "Anatomy" or an "Anatomie"?

Burton's title (by no means the longest in the period) is in many ways typical in elaborating its subject matter and indicating the book's internal structure. By referring to the fields of philosophy, medicine and history, Burton's title designates its multiple methodological and market orientations. The illustrations on Burton's title page, so complex as to require a facing-page commentary, include at the bottom center an image of Burton that works as the early modern version of the author photo. In the highly competitive early print market, the title page was a crucial advertising strategy, a site where the author or printer could multiply authorize the contents that followed. By means of the title, the book not only described its uses, but also began to theorize itself by imagining the social and intellectual spheres to which it contributed and belonged. The title, that is, was a central locus for self-reflection, not unlike the searchable disciplinary keywords that appear on the back cover of the modern academic book to identify appropriate or relevant fields. In this sense, it can be said that a book's theoretical dimension was produced partly by the market, even as the market was in turn refined by textual and disciplinary specialization. 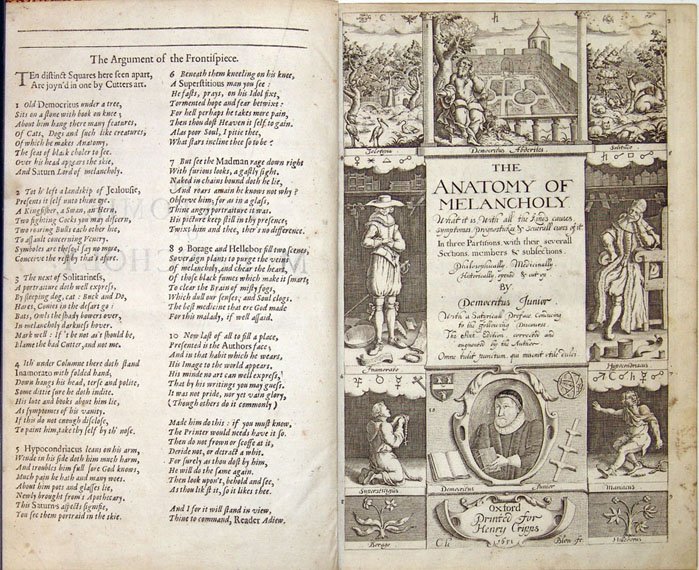 
THE ANATOMY OF MELANCHOLY.
What it is, With all the kinds causes, symptoms, prognostickes, & seuerall cures of it.
In three Partitions, with their severall Sections, members & subsections.
Philosophically, Medicinally, Historically opened & cut vp By Democritus Junior. With a Satyricall Preface Conducing to the following Discourse. The Sixt Edition, corrected and augmented by the Author. Omne tulit punctum. qui miscuit utile dulci.
Oxford: Printed for Henry Cripps. 1651.