Produced by The Work Projects Administration, this pamphlet profiles Chicago's confectionery industry towards the end of the Great Depression. From 1935-1943, the WPA was the largest employer in the country, employing millions to carry out collaborative "public works" projects, including the construction of public buildings and libraries. The WPA also commissioned many writing and research projects about American business. This booklet looks at major confectioners of the day in a playful style and includes comic-like pencil sketches, illustrated by the Illinois Art Project. It reveals the scale and significance of candy business in Chicago in the 1940s, claiming that the candy industry is the fifth largest in the city, employing 15,000 persons and making one third of all the nation's candy. The book offers a glimpse at what candy factories were like seventy years ago by describing in detail: Curtiss Candy, Mars Inc., Snyder Candies, Bunte Brothers, E.J. Brach, Marshall Field's and Kranz Candies 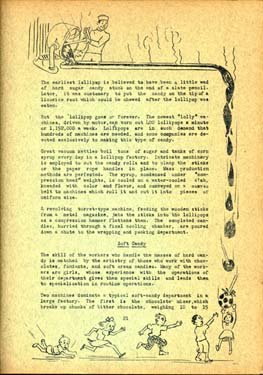