Collections & Exhibits > Exhibits > Sweet Home Chicago: Chocolate and Confectionery Production and Technology in the Windy City > History of Chocolate and Candy Making in Chicago > "Pilot": An Authoritative Book on the Manufacture of Candies and Ice Cream

"Pilot": An Authoritative Book on the Manufacture of Candies and Ice Cream

William M. Bell Company founded a flavoring company in Chicago, Illinois in 1912. In the early years, Mr. Bell sold his flavors to local ice cream parlors, grocery stores, and soda fountains. His first manufacturing facility was on West Grand Avenue. This recipe book was prepared for Chicago's candy kitchens and ice cream makers in the hopes that they would implement his recipes and further, buy his flavors, oils and ingredients.

William M. Bell was said to have a keen ability to analyze and create flavors. Bell's unique and custom flavors were incorporated into some of the first mass-produced caramels and marshmallows made in Chicago. Bell's flavors remain widely used in confectionery products. The business has expanded greatly and today Bell supplies flavors and fragrances to food, beverage, cosmetic, and household products companies around the globe. 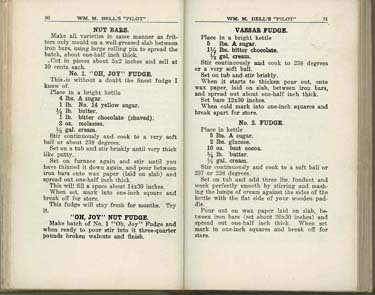