Collections & Exhibits > Exhibits > Sweet Home Chicago: Chocolate and Confectionery Production and Technology in the Windy City > The Technology of Candy Making > The Sugar Shortage and Substitutes for Sugar

The Sugar Shortage and Substitutes for Sugar

The world's sugar production for the 1918 crop year resulted in a shortage and this book is an investigation by the Bureau of Foods, Markets and Farm Products into the "sugar situation".

In 1919, sugar was a commodity of concern the world over. During World War I (1914-1918) there was a world shortage. Sugar was scarce in European countries, and many of them had instituted sugar rations. In the United States there was much difficulty in securing supplies throughout the War. The public demand remained unusually high post-war, which was partially attributed to prohibition and to hoarding. The book looks at the importance of the growing of sugar beets in the United States and the use of substitutes. 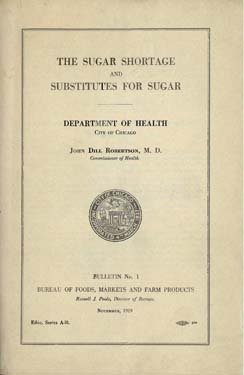