Collections & Exhibits > Exhibits > Sweet Home Chicago: Chocolate and Confectionery Production and Technology in the Windy City > History of Chocolate and Candy Making in Chicago > The Wrigley Spearmen at Work and Play

The Wrigley Spearmen at Work and Play

Before William Wrigley Jr. was a gum man, he sold soap. He enticed his customers to buy his soap by offering them free gum with their purchases. When he realized his customers were more interested in his chewing gum than his soap, he worked with a Chicago manufacturer to make gums he called "Lotta" and "Vassar".

He introduced "Juicy Fruit" at the Chicago World's Columbian Exposition in 1893 along side other new products like Quaker Oats, Cracker Jack and the hamburger. Wrigley brought Spearmint and Doublemint to market shortly after and soon created his Wrigley Arrow or Spearmen characters to help promote his gum. Wrigley strongly believed in the power of advertising. His advertising credo was, "Tell 'em quick and tell 'em often."

The Wrigley Spearmen characters hosted a number of illustrated promotional booklets and magazine advertisements including some aimed at children featuring Mother Goose tales. Wrigley would go on to build a truly sticky empire with memorable advertising like the now famous Doublemint Twins campaign. Today, the Chicago based company, owned by Mars Inc., makes candies such as Life Savers, Altoids and Starburst as well their iconic gums. 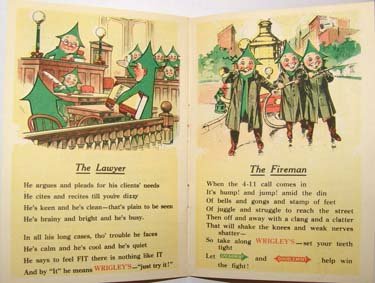 The Lawyer and the Fireman